MOUNT FUJI
The drawing that goes along with this Mount Fuji article was done by no other than the great Thomas Ahearn – comic book artist extraordinaire. This drawing depicts The Demon Warrior aka Paul Dale Roberts flying his vintage F-80 Shooting Star that he restored. The Demon Warrior plans to travel the world in his restored plane with his group The Trio. In this drawing, sitting on the wing is Hoppy and flying behind the plane is Neon Meteor Star Goddess aka Deanna Jaxine Stinson. Behind The Trio is Mount Fuji in Japan. Villains reading this article, you have nothing to worry about, the plane is disarmed and is only used for pursuit and low flying punk out aerobatics to scare the bad guys. The reason why The Trio is visiting Tokyo – Japan and Mount Fuji is because I received an email message from Hayao Tanaka from Tokyo, Japan. Here is Hayao’s email:
“Hello Halo Paranormal Investigations. My name is Hayao Tanaka, I am from Tokyo, Japan. I have been a foreign exchange student and lived in Foster City, CA, so my English is pretty good. Have you ever been to Aokigahara Forest in Japan?
Special Note from Paul: I have been to Tokyo, Japan during my Army days, but I have never visited Suicide Forest aka Aokigahara Forest.
Paul Dale Roberts in his Army Days

One time in 1997, 2 of my friends and I, went to this forest. The Aokigahara forest in Japan has the reputation of being the final destination for people that feel hopeless, all alone, suicidal. This has been going on since the 50s. There are anywhere from 10 to 30 suicides per year in the forest. Usually someone will bring a tent, family pictures to look at before killing themselves, prayer material, etc. It’s a pretty sad sight to see an area where a person has died. In 1997, me and my two friends went there and we hiked around. My one friend Genzo had been drinking and we came to a site that was used for a suicide. The body was moved, but the sleeping bag, tent and some family pictures were at the site. My drunken friend had to pee and urinated near the site. When we discovered he did that, we yelled at him to stop, that he was desecrating the site. We lectured him all the way back to the car. On the way home, I almost got into a car accident. I dropped off my drunken friend. The next morning, I received a call from his frantic mother, she tells me that Genzo had a brain aneurysm and was in emergency care at the hospital. Genzo survived this ordeal, but is still rendering from the effects of this traumatic experience. My question to Halo is do you think that Genzo received that aneurysm, because he disrespected a death site?”
Special Note from Paul: I absolutely do believe that Genzo paid the consequences for defiling that death site. A good example of that is in 1972, a man walking through a cemetery in a town in West Virginia was drunk and kicked over a few tombstones. When this man got home, he was tormented by angry spirits. These angry spirits toppled his TV and broke it. He found his cat dead and many more things were happening in his house, that you can only refer to it as being that of “paranormal activity”. This man then went back to the cemetery and fixed the tombstones and then got on his knees and prayed for forgiveness. When he went home, the paranormal activity stopped. When you poke the supernatural, the supernatural has a tendency to poke back.
According to Wikipedia:
“Japanese spiritualists believe that the suicides committed in the forest have permeated Aokigahara’s trees, generating paranormal activity and preventing many who enter from escaping the forest’s depths. Complicating matters further is the common experience of compasses being rendered useless by the rich deposits of magnetic iron in the area’s volcanic soil. Due to the vastness of the forest, desperate visitors are unlikely to encounter anyone once inside the so-called “Sea of Trees,” so the police have mounted signs reading “Your life is a precious gift from your parents,” and “Please consult the police before you decide to die!” on trees throughout. This does not deter determined people from committing suicide in this dense forest. Each year dozens of corpses are found by volunteers who clean the woods, but many are forever lost in the very thick woods. Japanese authorities have discontinued publishing exact suicide numbers in order to avoid making the place even more popular.” 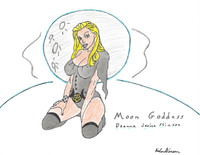 WORSHIPING THE MOON:
A lot of people do not realize that before I was a paranormal investigator, I was in the comic book business and even published my own comic book called The Legendary Dark Silhouette. The drawing you see above was done by artist Richard Vasseur, it depicts Deanna Jaxine Stinson as the Moon Goddess. Deanna has many superhero personas and it’s sort of like Dial H for Hero published by DC Comics, in which a magical dial that enables an ordinary person to become a superhero for a short time, such as an hour, by selecting the letters H-E-R-O in order. Each time it is used, the dial causes its possessor to become a superhero with a different name, costume, and powers. With Deanna it’s a little different, she chooses the superhero she wants to be and stays with that superhero as long as she wants. With this story, she has took on the persona of Moon Goddess, a superhero that can alter the blood of her opponents as if the blood was the tide of the ocean and cause the opponent to pass out. Also Moon Goddess fits into our next story.
With the paranormal hotline, I get calls from all over the United States, Puerto Rico and Canada. At times from different countries. I got a call from David Hester from Seattle, Washington. David claims he is Wiccan and worships the moon god known as Mani. I do not know who Mani is, but fortunately my wife who studies the influence of our Moon with mankind knew who Mani was. Mani is basically from Old Norse religions and is the personification of the moon. This is what Wikipedia says: “Máni is attested in the Poetic Edda, compiled in the 13th century from earlier traditional sources, and the Prose Edda, written in the 13th century by Snorri Sturluson. Both sources state that he is the brother of the personified sun, Sól, and the son of Mundilfari, while the Prose Edda adds that he is followed by the children Hjúki and Bil through the heavens. As a proper noun, Máni appears throughout Old Norse literature. Scholars have proposed theories about Máni’s potential connection to the Northern European notion of the Man in the Moon, and a potentially otherwise unattested story regarding Máni through skaldic kennings.”
Now that we know who Mani is, thank goodness for Wikipedia. Let’s go back to that phone call from David Hester. David said he was having some marriage problems and some major financial problems. David says he is part German and is 1/2 Norwegian. David laughs and says he has Viking blood. David said he started praying 3 times a day to the god known as Mani and on the 4th day of prayer, David came upon an inheritance, his uncle passed away and left him with $7000.00. This money was used to pay off 2 credit cards that were almost maxed out. With the financial burden now behind him, his marriage was turning a new leaf and his wife became more understanding with David and more loving. This couple now had a new lease in life. David says on one night, Mani actually appeared in his bedroom and Mani was a being of light. Mani touched David’s shoulder and said “life will be pleasant, keep vigilante.” Mani then dissipated into sparkles and vanished. David wanted to know if I think Mani was actually Mani, or did he encounter an angel.
Special Note: It is David that thinks the being is Mani. The light being never identifies itself. I do believe it was an angel and not the Moon God known as Mani.