My Colorful Family
By Paul Dale Roberts, HPI’s Esoteric Detective
Halo Paranormal Investigations
www.cryptic916.com/
Sacramento Paranormal Help
www.facebook.com/HaloParanormalInvestigations/
Email: [email protected]
Sacramento Paranormal Haunted Hotline: 916 203 7503
The photos are of Paul Dale Roberts and Deanna Jaxine Stinson – Psychic Medium. The doll photo is of Knobby Nipsack. During a paranormal investigation, the client wanted me to take the doll, that they named Knobby Nipsack. They said that the doll on its own, moved its head. Other times they would find the doll in another location and no one in the family made claim of moving Knobby. A glass table was shattered and in a chair next to that table was Knobby Nipsack. The purchased Knobby from a flea market in Roseville. I brought Knobby home and blessed the doll and had no incidents. 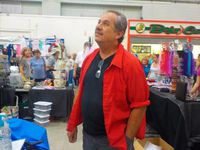 Sharon Diane Roberts – my sister – inventor of the Pet Passport, author, world traveler, scuba diver, musician, singer. Lived in St. Thomas USVI and Santorini Island – off the Coast of Greece. Married 3 times. Sharon played in the Kennedy High School Band and she participated with the band in playing at a SF 49er game in San Francisco and the Macy’s Thanksgiving Parade in New York.

Captain “Crazy Jeff” Voshell – 2nd husband to my sister Sharon. Jeff was the Captain of a boat called the Orion in St. Thomas. The Orion would take tourists to various islands near St. Thomas. Jeff was the boat mechanic for actor Morgan Freeman. Jeff was an unruly, obnoxious kind of guy and many say that Jeff was the inspiration for the movie Captain Ron, as seen here: en.wikipedia.org/wiki/Captain_Ron. Sharon’s first husband Mike was a archaeology scuba diver at Santorini Island. Sharon’s third husband Don went to school with Michelle Obama and sang in a choir for former President George Bush Sr at the White House. Don is a singer and music teacher and plays various musical instruments. JEFF VOSHELL: DECEASED. 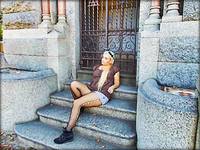 Fidencio “Chuy” Villalobos – my uncle. Former professional wrestler, wrestled with Pepper Gomez. Chuy while wrestling, wore a black ski mask and called himself “El Lobo”. Golden Glove Boxer and Black Belt in Karate. Has 2 sons. His son Will is also a Golden Glove Boxer and Black Belt in Karate. Will was a lifetime Marine and served overseas. When Will got out of the service he joined the Hell’s Angels with his brother, a former San Jose Gypsy Joker turned Hell’s Angel. Former Mexican Mafia. Former bouncer at local San Jose bar. CHUY: DECEASED.

Andrew Somprise Soyo – my half-brother. Once tried out for the Oakland Raiders. Ran for President of PG&E and lost. Vietnam War Veteran US Army – made Soldier of the Year. Drove a hot running Mustang at Laguna Seca Raceway. DECEASED. 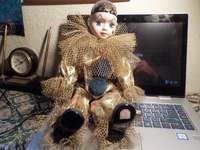 Joseph “Joe” Soyo – my half-brother. Professional pool player, amateur magician, surfer, hair stylist. Millionaire at age 36, owned a hairstyling shop. Joe would throw 3 day Labor Day parties that guests would enjoy his BBQs, pool, waterfall, Hawaiian dancers, musical band, etc. Once a year, he would take his female employees to Hawaii, all paid trip for his employees. Once a year, Joe and his girls (employees) would take a promotional photograph for the local newspaper. His hairstyling shop was called “Joe’s Shop”. DECEASED.

Illianna Vega – my daughter. Former Tuscon, Arizona police officer and former correctional officer for 2 correctional facilities in Arizona (Tuscon and Phoenix).
Emile Roberts – my grandfather – former US Army Military Police.
Sophie Roberts – my grandmother. Nickname: Angry French Woman. Lived in home in Lehigh, Oklahoma that was built by blood money, in which a local sheriff killed a man for his money, to build this home.
Allen Leaird – my cousin – former radio DJ.
Lydia “Ayala” McDonald – my aunt. Retired Napa State Hospital Nurse, married a fireman. Her son Brandon is a comic book artist for Damage Comic Books. A patient at Napa State Hospital lifted my aunt off the ground and slammed her into a wall. Lydia’s back was injured.