Images captured by the Solar Dynamics Observatory on March 12, 2012, show what appears to be a planet-size shadowy object tethered to the sun by a dark filament. 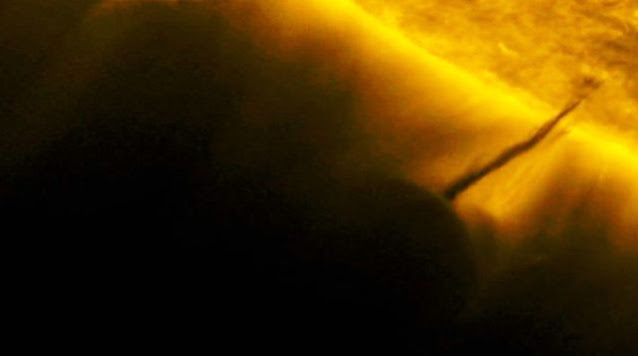 In the image sequence, a burst of brightly lit material can be seen erupting from the sun’s surface surrounding the dark object, after which the orb detaches from the sun and shoots out into space, suggesting it shows a UFO spacecraft refueling by sucking up solar plasma.

According to NASA scientists the strange appearance is less exciting than a refueling UFO, the feature is actually a type of solar activity called a “prominence,” a feature containing cooler, denser plasma than the surrounding 3.5-million-degree Fahrenheit corona.

It isn’t yet known exactly how prominences develop, but these dense plasma loops can extend from the sun’s surface thousands of miles into space.

Now, almost 8 years after the incident, many people are still in doubt whether it was a giant UFO tethered to the sun before flying back into space or a solar activity called “prominence” as explained by NASA scientists.