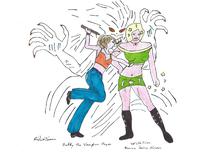 One of the things that is fun about being a ghost hunter for H.P.I. (Haunted and Paranormal Investigations) of Northern California is that I am able to head out somewhere, meet a potential client and listen to their ghost story. This Sunday, August 5, 2007, I was doing exactly that. I went to the quaint town of Davis and stopped over at Konditorei Austrian Pastry Cafe and waited for my potential client. Her name is Laura (Jeanne) Garman, she likes to be called Jeanne. Jeanne has a very bubbly personality and full of smiles. As I ate my buttered croissant and drank my vanilla bean coffee, I listened to Jeanne’s stories. Jeanne feels she may be an intuitive, she picks up on things that other people don’t pick up on. It appears that the paranormal may have followed her throughout her years. Jeanne is a single mother of 3 children and when she lived in a home in Spokane, Washington in 1989, she knew the home was haunted by a small girl ghost. She would hear constant laughing or sobbing. The house was over 100 years old and carried with it, a lot of history. The sobbing and laughing of a little girl would continue, then one night she heard somebody climbing up and down the stairwell. She heard running footsteps. She cried out for her 8 year old daughter, thinking it might have been her daughter running up and down the stairs at this late hour in the night. When investigating, her daughter was sound asleep and there was no one around who could have caused the sound of running feet. Later on, Jeanne discovers buried correspondence, underneath some dirt, underneath the outdoor steps. As she went over the letters, she read on how two families were corresponding with each other and in the letters they were inquiring on the health of a little girl that had consumption (an old word for TB). She moved from Spokane to a home in Benicia. She moved into an old Colonial home. There was a cellar to the home and when she entered the cellar, she felt like something was dead in the cellar. It was an overwhelming feeling, she could not stay in the cellar to long. The cellar door would open by itself on a regular basis. One night she heard a woman’s voice crying out to her….”Jeanne, Jeanne”. This was enough for Jeanne, she now lives in Davis and has not witnessed any paranormal activity in her new residence. On this night paranormal investigator/scout Jennifer Baca came over and we set our goals in investigating three locations. First off, the East Lawn Elk Grove Mortuary off of East Stockton Blvd, Camellia Memorial Lawn at 10221 Jackson Road and finally the abandoned Ice Crystal Factory between 15th and 16th Street – on R Street. We brought along another ghost hunter, his name is Pika, a Jack Russell Terrier that belongs to me. 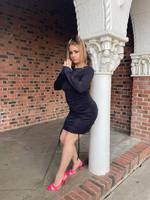 When we arrived at East Lawn Elk Grove Mortuary, we stopped by my mother’s (Rose Marie Roberts) grave and I gave my respects. I also stopped over at my stepmother’s parents (Mitchells) gravesite along with the Huft gravesite to give my respects. After my silent prayers, we started our ghost hunting. What is unusual about this cemetery is that there are turkeys wandering around the grounds and Pika had a field day chasing them. There was no unusual activity at this cemetery and we headed over to the Camellia Memorial Lawn. This is when things became strange. While we took photos and turned on our digital audio recorder, we started hearing voices and whistles. In one location of the isolated cemetery, I heard a distinct man’s whistle, he was whistling a tune, it lasted for no more than 5 seconds. Jennifer didn’t hear the whistle. Jennifer and I, both heard a woman’s laughter, then we both heard what sounded like two children talking. The closest homes were one mile away. There was wind. So, could have voices been carried for a mile to our location, where we could actually hear the voices as if they were no more than 20 to 50 feet away from us? The woman’s laughter sounded like it was no more than 50 feet away and it was a loud laughter. The man’s whistle, sounded like it was no more than 20 feet away, in the opposite direction of the two houses that were a mile down the road. Was this truly a whistling wraith? There was a point of time, that Pika seemed focus on an area near a tree as if he sensed something. I checked to see if there was any animals in the tree and there wasn’t any, but he kept looking at one area of the tree as if there was something there that only he could see. He finally got distracted to chase a couple of rabbits and one cat. Another time, I heard two loud knocks on a tree and I cannot determine what caused the two knocks. This was a very strange cemetery.

Our last destination was the abandoned Ice Crystal Factory. I was told it was once a fruit packing plant, but the sign says Ice Crystal, so I am not sure. This factory has been abandoned since the 70s and I was told that 2 men that worked there, were killed by the factory machinery. The story I was told that the two factory workers were taunted by the other factory workers because of their deformities. One of them, that was nicknamed Charlie Crooked Teeth, had crooked teeth. The other factory worker nicknamed Jimmy One-Eye, had only one good eye. Charlie Crooked Teeth and Jimmy One-Eye became very close friends. I do not exactly know the kind of machinery they were both working with, but the story goes that an accident occurred and they were both killed by the machinery. Other stories said that they were set-up and the machinery was sabotaged, this lead to their deaths. Supposingly, Charlie Crooked Teeth and Jimmy One-Eye haunt this factory. As we took digital photographs, we got some interesting orb pictures. I took a picture in an opening of a window and got 13 orbs in one photo, the next shot, there was no orbs. Jennifer took a picture at the location where my car was parked at and got some orb shots near my car. 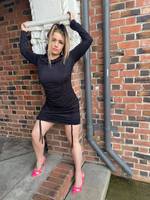 I would like to do a further investigation of the Ice Crystal Factory and Camellia Memorial Lawn, both places seem to have some exceptional activity. Could the restless spirits of Jimmy One-Eye and Charlie Crooked Teeth still haunt this abandoned factory? Are they trying to find why they died sudden deaths. Could they be the orbs that seemed to have followed Jennifer and I, around the factory and later seen by my car? If so, Jimmy One-Eye and Charlie Crooked Teeth, may you both rest in peace.