EL GATO VOLADOR OF JOSHUA TREE NATIONAL PARK
There is an artist in Panama named El Chombo, that knows of a story about a flying cat aka Gato Volador. Here are some lyrics to a song he created about this flying cat:
Hago como iguana / I do like an iguana
Hago como mosquito / I do like a mosquito
Hago como pollito / I do like a chick
Hago como ballena / I do like a whale
Hago como vaca / I do like a cow
Muuuuu / Mooooo
Pero ustedes lo que quieren es… / But what you all want is…
El Gato Volador / The Flying Cat
I don’t know what inspired El Chombo to come up with these lyrics and what he knows about El Gato Volador. What I know is that I received a call on the paranormal hotline on August 5, 2021 at 2pm. The call is from a Marine who only wants to go by his last name. His last name is Bakker. Bakker says that he and 2 other Marines were hiking at Joshua Tree National Park and taking pictures. When they arrived at their destination point, they were headed back on the trail and headed to their vehicle. During the walk back, they heard what sounded like a mountain lion. On top of a rock was a large cat and the cat stared at them for a couple of seconds and leaped. Large wings were seen on the cat and it flew off into the horizon. Bakker said things happened so quickly, he did not manage to get a picture of the winged cat. Bakker’s friend who is of Mexican descent called it “El Gato Volador” which means in English….flying cat. Bakker says he plans to go back on that trail and look for this flying cat. Special Note: Joshua Tree National Park is a very strange place. Hikers, rock climbers have turned up missing. Dead bodies are found throughout the park. UFOs have been seen in the skies over Joshua Tree National Park. Gram Parsons made claim of many UFO sightings at this park. Parsons was cremated by two friends at this park. Let’s not forget Charles Manson and his clan were once living at Spahn Ranch, which is not too far from Joshua Tree National Park. Joshua Tree National Park is definitely a place for high strangeness.
Dark Watcher by William Carlisle 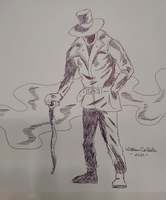 MONTEREY DARK WATCHER
For 6 years I lived in Monterey, Ca near Del Rey Oaks. As a child, I lived in a haunted house on Effy Street in Fresno, CA. The entities in that home tormented me. It was horrible and I was so glad that we moved away to Monterey. I never considered myself as a psychic, but ever once in a while, I would have a paranormal experience and I would encounter a ghost or see a ghost from a distance. I’ve had people tell me I am a psychic, but that is a title I don’t want and when you have a title like that, too much is expected of you. If I have a paranormal experience, then so be it, it was meant to be. While in Monterey and hanging out at the beach with my childhood friends: Kevin Ford, Brian Phelps, John Rochelli and John Mead, we were all strolling along the beach looking for unusual sea shells or fighting each other with long strands of sea weed. While John Rochelli and John Mead were battling each other with long strands of sea weed, I noticed on top of a hill an unusual person looking out into the ocean. I told everyone to stop and take a look. This guy who was at least 6′ 6″ was staring out into the ocean. He wore a black fedora type of hat, he had a huge wooden walking cane. He wore all black clothes, his trench coat was black. As we got closer to this guy, Kevin said he noticed that the man had no facial features. No eyes, no nose, no mouth. I didn’t see what Kevin was talking about, all I can see was the silhouette of the man. Kevin screamed out and we stopped just for a moment to look at Kevin. When Kevin and I, looked back up on the hill, the strange man was gone. John Rochelli and John Mead said they didn’t see a man on a hill. Kevin was freaked out and kept saying the man’s face had no features. John Rochelli and John Mead just laughed, because they said we were both seeing things. At the time and many years afterwards, I merely thought Kevin and I, saw a ghost, but a few years ago, I learned that what we saw is called a Dark Watcher.

I learned that The Dark Watchers aka Los Vigilantes Oscuros were seen observing travelers along the Santa Lucia Mountains. We saw our Dark Watcher around 7pm (twilight hours) and Dark Watchers are known to be seen during twilight or dawn. Dark Watchers are known to be motionless and the Dark Watcher that we saw was motionless. According to newspaper archives in the mid-1960s, a Monterey Peninsula local and former high school principal went on a hiking trip in the Santa Lucias when he suddenly spotted a dark figure standing on a rock and surveying the area. When the principal called out to the other hikers, the creature vanished. When I took basic training at Fort Ord, I met Private Thomas Laywater. Thomas told me that he was from Carmel and during his high school days, he would make trips to Carmel Valley to see his girlfriend. On one particular trip on a hot day, he saw the silhouette of a man standing on a rock ledge looking out over Carmel Valley. This entity was motionless. Thomas thought it was very unusual and made a U turn to investigate. Thomas could not understand how this guy is standing on a rock ledge fully clothed. It was a hot day, you would think he would be wearing shorts and maybe a tank top. Thomas arrived to the spot where he saw the tall dark figure and the tall dark figure was no where around. Thomas thought he saw a ghost. Like I said previously, I also thought I saw a ghost. I was fascinated that Thomas saw the same thing as what Kevin and myself saw. A few years back, I stumbled across Dark Watchers and after reading about Dark Watchers, I knew this is what Kevin and I, saw. This is the entity that Thomas saw. We all witnessed The Dark Watchers. I can only wonder if The Dark Watchers are some kind of extraterrestrials and the reason why I am saying that, is because Monterey Bay is known to be a hot spot for UFOs and USOs (Unidentified Submerged Objects). Some Ufologists believe that there is a UFO base at Monterey Bay and that is why it’s a hot spot. The Dark Watchers are definitely “strange” and if anyone has seen the Dark Watchers, please email me, I want to know your story.