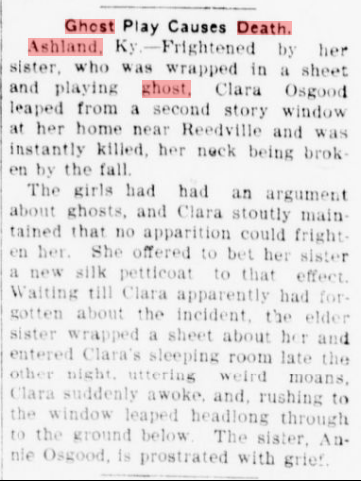 When it comes to the business of ghosts, you’ll often hear the old saying that there is far more to fear from the living than there is from the dead…and sometimes, that fear is simply within our own minds. Today’s blog deals with a tragic story that happened back in 1907, near Ashland, Kentucky.
According to the November 16, 1907 edition of the Superior Times (a Wisconsin-based newspaper, which can be found on the Chronicling America website for free), a young girl named Clara Osgood leaped from a second story window of her home, fatally breaking her neck in the fall. Clara and her sister had been arguing about ghosts. Clara claimed that no apparition could frighten HER, and even bet her new silk petticoat that she was right.
Her older sister, Annie, intent on proving her wrong, dropped the matter for the time being. Then, sometime later, she wrapped herself in a sheet, and entered Clara’s room late at night, making weird moaning sounds. Overcome with fright, Clara ran to the bedroom window and leaped to her death.
What was supposed to be a simple prank between two sisters quickly turned deadly. A fun little joke, proving that her sister wasn’t as brave as she boasted, left a young woman deceased, and left a reminder to us all to just be careful when it comes to the ghosty stuff. Be careful who you try to scare, and if you see something scary, try to calm down and look at the situation rationally. More times than not, things are NOT what they seem.
While this prank had a tragic end, the art of scaring each other silly with the paranormal is nothing new! Here’s another newspaper article about a different ghostly prank—when a pair of lovers chose a local cemetery for their romantic meetups, the sexton decided scaring them away would be the best way to stop their behavior!  LOVERS FRIGHTENED AS CORPSE AWOKE.