BATTLE FOR WORLD | January 19, 2020: On advice from U.S. Secretary of State Mike Pompeo, President Trump gave the orders to launch a drone strike to kill Iran’s Major General Qasem Soleimani on January 3. He was on a peace mission to see if he could start the process of creating political distance between the Gulf monarchy and members of the U.S.-led anti-Iran axis like Israel, but this was not in the interest of the United States and its allies.

After Soleimani’s assassination, the Iraqi parliament voted to expel all U.S. troops from the country and Iran’s Grand Ayatollah Ali Khamenei has sworn to seek “severe revenge” on the “the criminals who have stained their hands with [Soleimani’s] and the other martyrs’ blood…”

The maximum pressure tactics of aggression by the United States continued toward Iran. And all this was leading up to carrying out a plan that was already drafted to strike targets inside the country. The window of opportunity to strike Iran is getting more narrow by the month and after awhile the opportunity to strike will no longer be possible.

Trump annulling the U.S. from the Iran nuclear deal was the beginning of inciting trouble-making against the country at the request of Israel’s Prime Minister Benjamin Netanyahu.

With the killing of Soleimani the U.S. media went on a blitz reporting the reasons why he had to be taken out. And his assassination was only the beginning for a bigger plan to unfold.

On January 8 a Boeing passenger plane belonging to the country of Ukraine take-off from Iran en-route to its destination. The plane was given the OK to take-off even though Iran had fired several missiles hours prior into Iraq at U.S. military bases.

Ukraine’s president Zelensky said the plane was the most modern in their fleet. No information has been released so far as to whether the Boeing 737 plane had an autopilot feature which is officially used to control the trajectory of an aircraft, not take-off as this cannot be done. But opinions have been expressed that autopilot or some other form of aviation software and electronics can allow the control of a passenger plane from a command center. Also keep in mind that U.S. drones like the Global Hawk has demonstrated auto-take-off or assisted take-off from a command center. Automation driving technology is currently being used in self-driving cars. If a version of autopilot exists that can allow a passenger plane to auto-take-off or assisted take-off from a command center this information is likely classified for covert uses.

On January 17 Russian Foreign Minister Sergei Lavrov said, Iran’s accidental shooting down of a Ukrainian airliner last week (January 8) happened at a time when “Tehran was spooked by reports of advanced U.S. stealth fighters in the area.”

Foreign Minister Lavrov revealed that “There were at least six (U.S.) F-35 fighters in the air in the Iranian border area (at the time). This information has yet to be verified, but I’d like to underline the edginess that always accompanies such situations.” And “There is information that the Iranians were expecting another attack from the United States after the strike but did not know what form it might take.”

So naturally, Iran misidentified the Ukrainian Boeing 737 passenger plane that showed up on radar for one of the U.S. F-35 fighter jet and shot it down.

Canadian PM Justin Trudeau blames downing of Ukraine jet on US ‘escalation’, and the Europeans appear to be saying the same.

Related article:
Israeli Intelligence Was Involved in US Assassination of Top Iranian General

Pompeo then said the U.S. has shifted to “deterrence” regarding Iran, but that it’s not everlasting. Hinting that plots would still be contrived to bring about a strike on Iran. So U.S. foreign policy aggression continues, plotting to strike Iran. 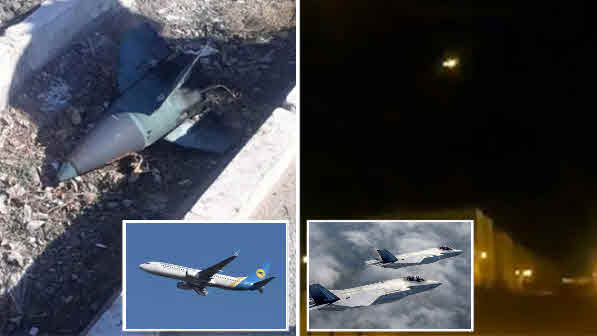 Loading...
"Not by might, nor by power, but by my spirit, saith the Lord of hosts." Zechariah 4:6
Read it..
BEFORE IT'S NEWS
SIGN UP FOR OUR NEWSLETTER
Today's Top Stories
Sarah Westall: Whistleblower Brutally Beaten, Coronavirus Explained From Chinese Healer, Hired Mercenaries
The Dollar Will Collapse Within Weeks! What Will Replace It? - Must See Video!
Q: Hollywood Is Burning! Is Barron Trump Q? Barry's Belated Impeachment? Best Is Yet 2 Come! - Great Video
Jason A - Unexplainable Events Happening in 2020!
The History And Mission Of The Nazi-Illuminati Bush (Scher(f)f) Crime Family
David Abel Exposed As Crisis Acting Freemason On Board Diamond Princess Cruise Ship
Mark Taylor: Q! Gloves Are Off, Fight Is On
Billy Meier Predictions and Prophecies Are Now Being Proved Correct
Q3649: It's Going to Be Biblical! An Epic Response to Mayor Pete Saying We Can't Be Christians! Great Video!
Worldwide Virus Alert! Millions Infected & Spreading! - Must See Video!
Loading...
Featured
BOMBSHELL SECRETS REVEALED! Behind The Veil of Mass Deception: Just How Fake IS The [FAKE NEWS]?! Great Video!
"Turn Off Your Camera and Step Out of the Car" New York State Extortion Stop
Health Officials Prepare For COVID-19 Throughout USA.
Did a Senior Chinese Military Intelligence Officer Call the Coronavirus a Hoax or Did Dean Koontz Write A 'Novel' Virus Sequel?
The 5G Trojan Horse: What You’re Not Being Told
‘Whom the gods would destroy – they first make mad’ – COVID-19 Hysteria goes global
🚨CORONAVIRUS: Who is Paul Cottrell; an embedded Gov’t Plant / Agent, Zionist Schill (“Snake in the Grass”)?
Whistleblower found dead
Q: You Have Come Far, Anons (Patriots)! You Are Ready! A Public Awake Is Their Greatest Fear! - Great Video
US Now Admitting Coronavirus Has Broken Containment Beyond China! - Great Video!