Thread by @drawandstrike: You all know why Trump has now left the White House

You all know why Trump has now left the White House – being seen off by the entire WH staff before he traveled to Ohio – because he won’t be back for awhile – to go to his resort in Bedminster, NJ, right?

Step back and remember the big picture. What were Obama & Co. so *desperate* to keep hidden if Trump won the election?

I can think of THREE THINGS off the top of my head that Obama, Hillary and Biden and A WHOLE LOT OF THE DC SWAMP would be frantic to keep from being exposed:

1) Uranium One: the sale of 25% of US uranium stocks placing them under the direct control of Vladimir Putin and the Russians.

Massive bribes paved the way to get that deal done to sell out our country. People who took that dirty $ are **desperate** to keep it buried.

2) Untold billions of dollars in US aid sent to corrupt foreign governments where US officials not only knew much of this aid was going to be STOLEN, they **kept the money flowing** in exchange for a couple million bucks kicked back to them in DC under the table.

3) The Weiner laptop, which is reported to have had stuff on it that caused veteran NYPD detectives to throw up.

4) The secret side deals and bribery that went on to get the Iran Deal done, as well as all the Obama White House spying on members of Congress opposed to the deal & reporters investigating the illegal activity.

Somethings about to happen.

Trump needs to be in a tightly controlled environment while whatever this is goes down. A lot of people have access to the White House that will NOT have access to him at Bedminster.

The Optima FBI raids in Cleveland and Miami 3 days ago sent a CLEAR SIGNAL to the President’s enemies that yes indeed, he and Barr and Rudy are going to see this through.

They have not been bluffing.

Those FBI raids in Cleveland & Miami were directly linked to the Ukrainian corruption that caused at least $6 billion in US taxpayer money sent to Ukraine to disappear.

The two offices that were raided were involved in a massive amount of money laundering.

It turns out that two of the Ukrainian oligarch’s that ran PrivatBank, a large bank that got $1.8 billion in US aid and ‘lost’ it, laundered hundreds of millions of dollars through over a dozen shell companies & then used the laundered $ to purchase real estate in Cleveland.

For about a year and a half, ever since @RudyGiuliani revealed he was investigating the money trail of all of this stolen US aid in Ukraine the Democrats & the DNC Media roundly mocked and lampooned him.

It didn’t stop anything.

So let’s review what happened over the last 3 days.

Trump travels to Cleveland, poses in front of laundering machines.

Trump then doesn’t go back to the White House, turns out the staff came out to see him off before he left for Cleveland because nobody’s going to be seeing him for awhile, and then he’s supposedly left Cleveland for his Bedminster resort in NJ.

While Trump was appearing in Cleveland yesterday, this gets filed by the DOJ, to seize ASSETS PrivatBank purchased with it’s laundered money in Kentucky and Texas.

Of course, all the real estate the PrivatBank money was used to buy in Cleveland and Miami will also end up being seized.

Now you know why Trump has been carefully setting up asset forfeiture for the past 3 years. 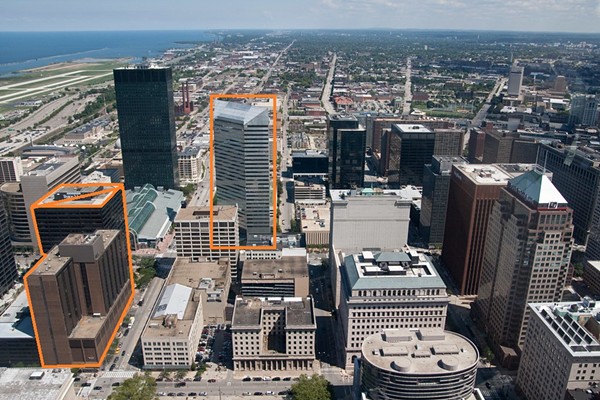 Understand this clearly: up until 3 days ago, a lot of the people involved in this MASSIVE WORLDWIDE CORRUPTION were likely telling themselves Trump wouldn’t dare try this. The repercussions would be far too great.

He would know they would come after him in sheer desperation.

And with those raids, and that very first of many asset forfeiture filings by the DOJ yesterday, these people now know the truth down to the marrow of their bones:

Trump is going to do it.

HE’S REALLY GOING TO DO IT.

He & Barr & Rudy are pulling the pin on this grenade.

And now that the pin has been pulled the Democrats, the GOP involved, the foreign leaders out there involved, and the media, they all know where that grenade is being tossed.

It’s in the air now. Coming towards them.

Do not underestimate the desperation and the sheer viciousness these people would descend into in their attempts to do whatever it takes to keep that grenade from landing in their midst and going off and completely exposing them.