Raquel Rodriguez, a ballot chaser working as a “consultant” for Mauro Garza’s U.S. House campaign in Texas, was recorded by Veritas journalists admitting how she coerces voters to change their votes and harvests a massive number of ballots illegally.

Rodriguez said on video that “Mauro [Garza] allowed me $2,500 to buy gifts” for voters, gifts Rodriguez appears to give voters in exchange for their vote.

I went down to Texas to see exactly how big Rodriguez’s Voter Fraud scheme was, and I had an opportunity to confront Garza about it.

You can watch the confrontation with Garza here:

As you could see, Garza tried to avoid me at any cost. Why did he run away from a journalist asking important questions?

Earlier today, Garza released an official statement on our investigation and announced that Rodriguez was no longer working with his campaign:

“I welcome any investigation and accountability to expose these outlandish allegations. I do not endorse or support any wrongdoing or voter fraud. If any member of my campaign team, paid or volunteer, engages in or gives the perception of any negligent behavior or threatens the integrity of voter registration or engages in voter fraud, they will be immediately fired and turned over to the County elections office and law enforcement. The volunteer in the investigative video no longer serves on my campaign. I hope that this story encourages the news media and legal authorities to investigate all evidence of voter fraud and suppression as it has been a rampant problem for decades in South Texas. I have been a long-time advocate for voter integrity and will continue my fight to make our voices as citizens heard, fairly and honestly. All I can ask for is patience from our supporters and a thorough investigation to secure the integrity of our elections.”

Rest assured, Garza still has a lot of explaining to do.

Garza wasn’t the only one who issued a statement on this bombshell Project Veritas investigation.

Renee Yanta, who was cited by Rodriguez on video as being a judge who leverages her Voter Fraud services, also responded: 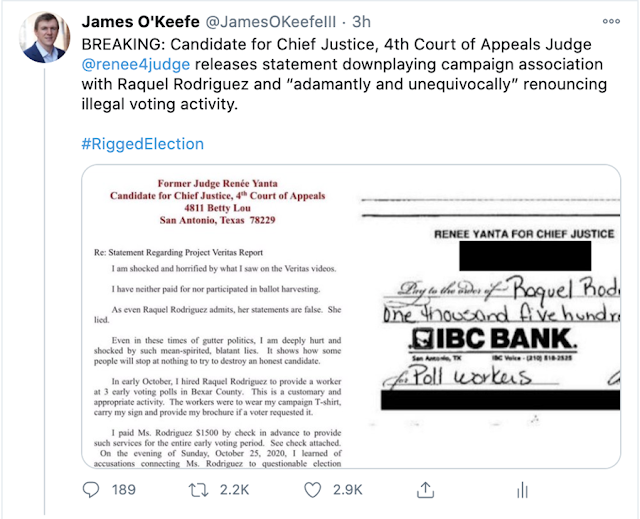 Yanta says that she is “horrified” by the Veritas videos because she “neither paid nor participated in ballot harvesting.”

Yanta’s claim that Rodriguez was lying on tape will surely have to be investigated. We must get to the truth on this matter. 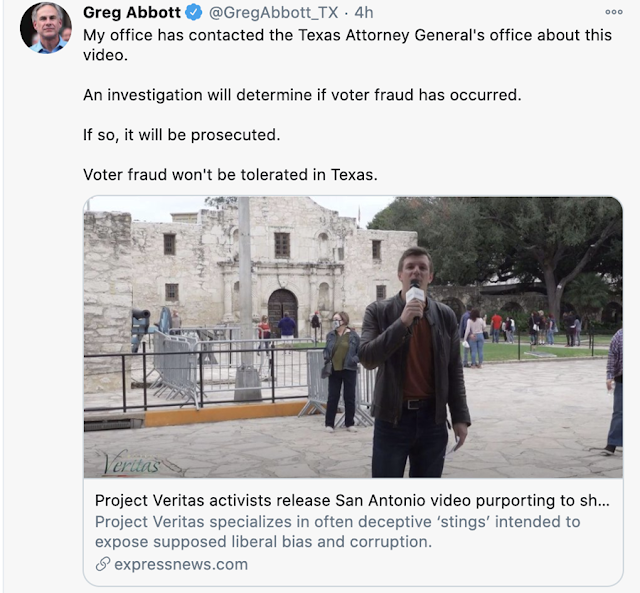 Both the Texas Governor and Texas Attorney General are now on this case, let’s hope that a serious investigation is conducted, and that justice prevails.

The truth is, the whole country is watching this story as it unfolds.

Take a look at just how much media coverage these videos have generated so far:

Being less than a week away from November 3, this footage really should concern every American.

We have to make sure that as many people as possible watch these clips.

But if it were up to Big Tech, it would never happen.

Take a look at the egregious censorship by Twitter today as they attempted to minimize our video’s impact: 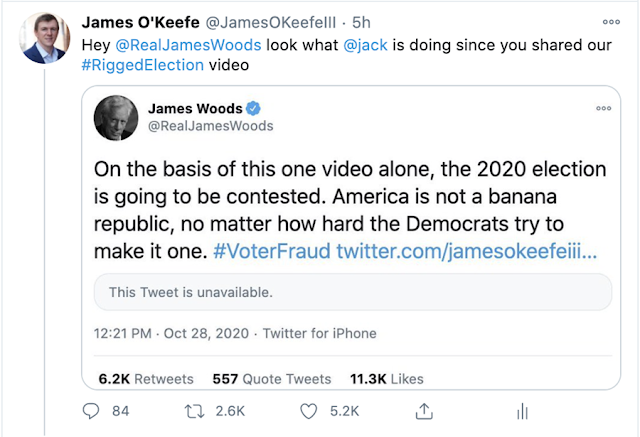 Truly disgusting. Twitter and all these other Big Tech companies have no shame.

“This Tweet is unavailable” means that Twitter just doesn’t want people to see the truth. It’s as simple as that.

But we have a saying here at Project Veritas: “Content is King.”

There’s nothing they can do to alter reality. This childish behavior from Twitter or any other pro-censorship organization will never slow Project Veritas down.