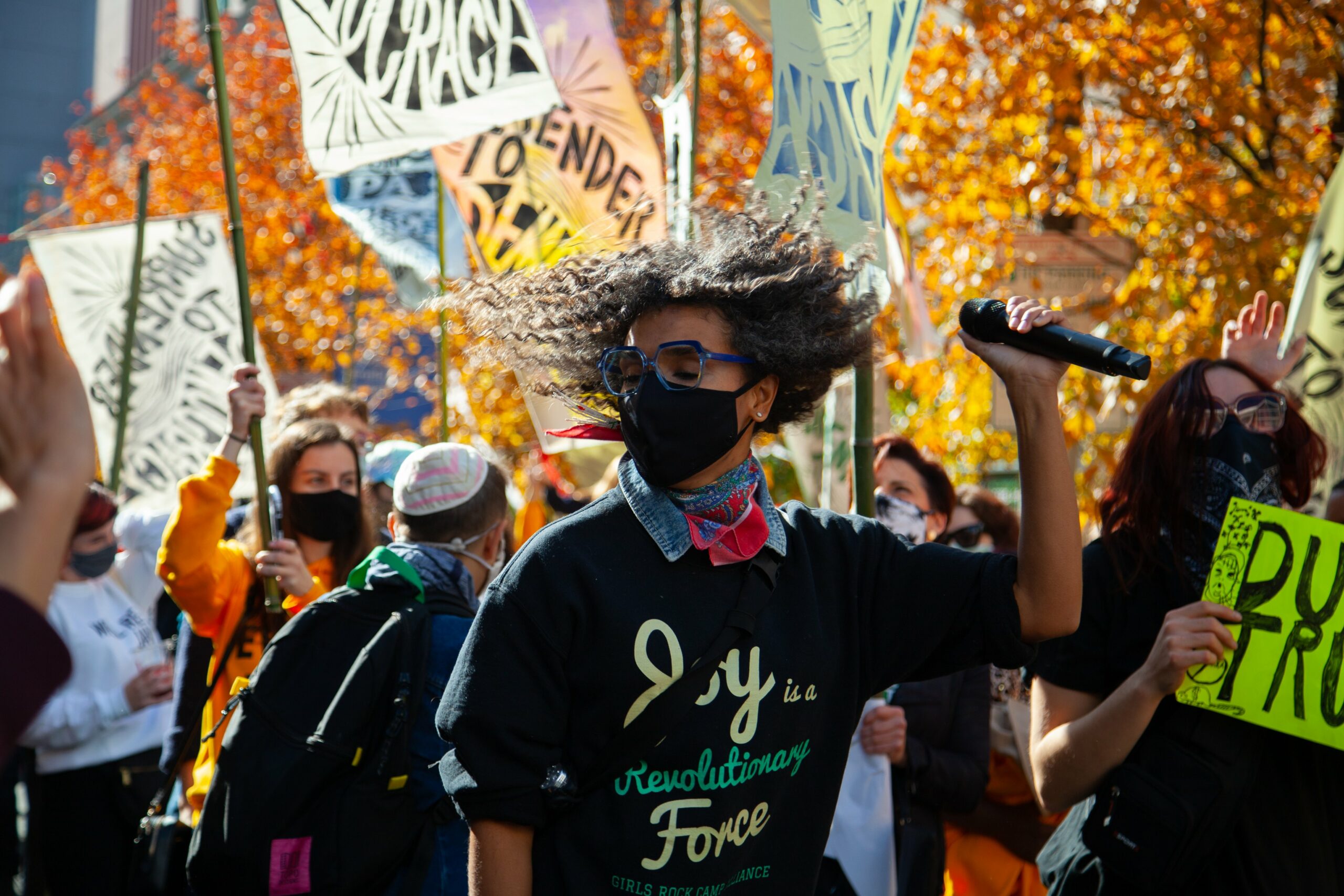 As poll workers meticulously counted votes in the days following the U.S. presidential election on Nov. 3, demonstrators flooded the streets in Philadelphia, Washington, D.C. and other cities across the country. Wearing costumes, playing instruments and chanting “count the vote,” these crowds created a groundswell of joyful, enthusiastic energy for four days of waiting before Joe Biden was named the projected winner on Saturday. The positive messaging of these demonstrations — and an emphasis on core democratic values rather than anti-Trump rhetoric — created a powerful contrast to the angry, right-wing rallies demanding “Stop the count.”

This didn’t happen by accident. For the past couple months, groups like Hold the Line, Protect the Results and Choose Democracy have prepared thousands of people to defend the election. Thanks to all the Zoom trainings, action pledges and local coordinating hubs, the strategic importance of celebrating Biden’s lead in the polls last week was clear, particularly once Trump launched his first accusations of fraud on Wednesday morning.

By taking to the streets, activists got a head start on shaping the messaging of the moment. From labor unions to faith leaders, the diverse mobilizations made it clear that any attempt to manipulate the election would be challenged. The overwhelmingly positive, celebratory nature of the protests showed that Trump’s supporters would not get to dominate media coverage or intimidate people to go along with his efforts to discredit the results.

With hashtags like #JoyToThePolls and #CountEveryVote, organizers cut the tension of the post-election waiting period by throwing block parties and parading through the streets. Some incorporated other tactics to demonstrate grassroots power — including sit-ins and threats of a general strike — to urge accountability from elected officials. The Center for Artistic Activism assembled a toolkit of ideas for amping up the creativity at count-the-vote rallies, such as new protest chants, flags, songs and guerilla projections.

The real center of this joyful multi-day block party was Philadelphia, a city that has been the site of recent mass protests after the police shooting of Walter Wallace Jr. Activists danced and partied in the streets for several days, with people in Elmo and Gritty costumes leading the “Cha Cha Slide” and the “Cupid Shuffle.”

Some of these actions had a specific aim, like the DJs who blasted Beyoncé to drown out a press conference touting Republicans’ one minor legal victory thus far. Others entertained the crowds, as groups like Positive Music Entertainment performed for onlookers, and more people brought instruments, played trombones and accordions, and marched with drumlines to cheering bystanders.

The People’s Kitchen set up a stand to feed protesters, the Resistance Revival Chorus danced in all-white, and faith leaders with Power Interfaith held a prayer circle outside the Philadelphia Convention Center. Some dressed as giant puppets in the shape of post office boxes and the White House while joining the dancers.

Washington D.C. also erupted in dance parties and go-go music concerts, as activists gathered in crowds outside the White House, marched through the streets and drove a pickup truck through the city singing into megaphones. A bike caravan rode alongside protesters, people choreographed music videos and dance groups performed for crowds.

Other cities saw a range of actions, including mass marches in New York — which were met with police violence — and a 240-foot-long mural in San Francisco on the sidewalk in front of the Jones Day law office, which represents Donald Trump. In Boston, a group called Jews Against Facism organized a sit-in outside Gov. Charlie Baker’s house demanding that he choose between facism and democracy. In Chicago, seven unions made a joint statement pledging to engage in mass nonviolent disobedience and a general strike if the election results are not respected. Asylum seekers in Mexico’s Matamoros refugee camp sang and clapped while waiting for the results. When the results were announced, they erected a string of balloons that spelled out “BYE TRUMP” along the Rio Grande, facing the U.S. border.

A number of groups, many Black-led, organized for weeks and months leading up to the election to promote positive messaging and joy to get out the vote. The Working Families Party started a project called Joy To The Polls in Philadelphia, which then spread nationwide as people shared videos of themselves dancing while waiting in line for early voting, and live bands played for voters waiting in line on Election Day in places like Flint, Michigan and Pennsylvania. This was part of a massive get-out-the-vote effort in which celebrities, businesses, sports teams and grassroots organizations used positive messaging and voter education to increase turnout.

When Biden was announced as the projected winner on Saturday, the party atmosphere continued as people in cities across the country banged pots and pans, cheered in the streets, honked their horns and blasted music from balconies.

While activists are still preparing for the possibility of Trump and Republican leaders rejecting a peaceful transfer of power, these post-election rallies and dance parties are a first step toward organizing popular resistance in the event of an attempted coup. They are keeping people engaged and hopeful, and helping to control the messaging and media portrayal of protests.

At the same time, they are getting people organized and ready for the work that lies ahead under a Biden administration.

Waging Nonviolence depends on your support. Become a sustaining member today and receive a gift.