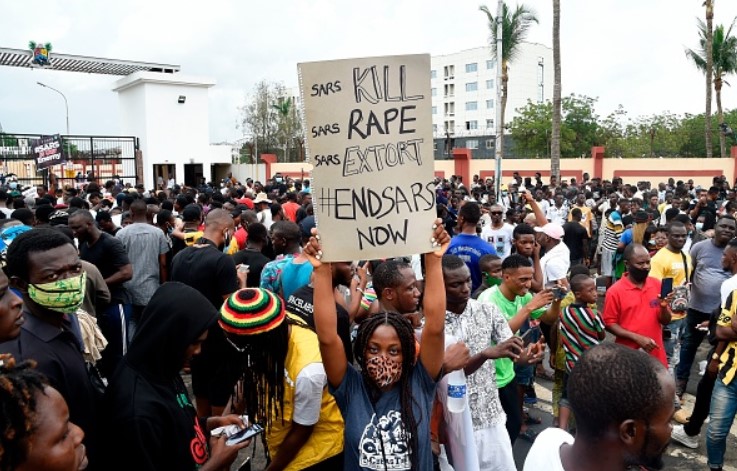 On Oct. 3, Nicholas Makolomi, a videographer in the town of Ughelli in Nigeria’s Delta State saw a boy jump out of a moving police car in front of him. Whether he jumped on his own or was pushed out was unclear, but he appeared injured. Makolomi and his friends trailed and recorded the police officers suspected to be members of the Special Anti-Robbery Squad, or SARS. A white SUV, believed to be owned by the injured youth, could be seen ahead of the police car. It was allegedly being driven by a SARS officer, in what the public interpreted as a carjacking.

Upon hitting social media, Makolomi’s video went viral, tapping into the existing youth anger against SARS. Other SARS brutality videos, unrelated to the incident, soon flooded the internet, sparking a mob attack in Ughelli on an off-duty SARS officer who was eventually rescued.

When the police traced and arrested Makolomi on Oct. 5 for “inciting violence and false information,” public anger had already hardened on social media, followed by unrest in Ughelli. The police clampdown on the unrest, as well as the emergence of more footage of police sadism, sustained the conversation online. Douglas Agu, a Nigerian pop musician known as Runtown, tweeted that he would lead a protest on Oct. 8 to #EndSARS. The hashtag was already in use as a symbol of long-ignored outrage.

In an attempt to thwart the protest, Nigeria Police spokesperson Frank Mba reached out to Naira Marley, a rebel musician who, with the rapper Falz, had voiced support for the Oct. 8 protest. On the day of the action, Marley’s massive supporters had gathered in Agege, a sprawling local council area in Lagos. They waited despondently for him, but he failed to show up.  An equally highly rated R&B singer named Small Doctor did turn up, however, and pulled the large crowd to Alausa Ikeja, office of the Lagos State government. With Nigerians seeing the size of the crowd, the game changed instantly.

Comedian Mr. Macaroni, and Tacha, a star of the “Big Brother Naija” reality TV show, led another gathering in Lagos the next day. The momentum grew and drew even more celebrities, who mobilized their followers on social media. The Macaroni-led group converged on Alausa, refusing to leave until someone addressed them. Since no one responded, they slept there on the open street. Images of their night watch triggered patriotic fervor never before seen among Nigerian youth.

Even after state government officials addressed them the next day, they demanded action. Public distrust of government was further aggravated when Nigeria’s Inspector-General of Police Mohammed Adamu announced the disbandment of SARS, only to introduce a new unit he called the Special Weapons and Tactics, or SWAT, team. The protest continued over the following days despite brutal police attacks, as “the mother of all marches” was scheduled in Rivers State for Oct. 13.

The Rivers State Gov. Nyesom Wike instantly banned the planned protest, apparently misreading the public mood. For a governor known to be high-handed, Wike’s action frightened observers. To defy his order was to risk a bloodbath, but the youth had had enough. Their defiance produced a gathering of over 10,000 people — the largest the new movement had seen — which sent a strong message to the powers-that-be in Nigeria, and inspired even more people to join.

With daily, simultaneous protests across other states came the challenge of funding and crowd discipline. The protest had no central leadership, so organizers leading each gathering took care to ensure order. They called for funding to provide for health emergency services, and volunteers to help manage activities on protest grounds. Aware that protests are can sometimes degenerate into violence, they introduced entertainment.

It began with serving water and light snacks, then full meals — including to security officers dispatched to protest venues. In addition to food, as the crowd surged each day, there were music shows and art performances. Each altruistic action had a multiplier effect: More volunteers turned up — including over 200 lawyers helping to bail out arrested protesters — and more people marched and donated. Then came the Feminist Coalition, a Nigerian pro-equality group which was started months earlier in July.

The group, in collaboration with money-transfer startup Flutterwave, created a central fund for donations. They shared the link on social media, which was retweeted by many Twitter influencers, including Twitter CEO Jack Dorsey. Feminist Coalition injected credibility into the funding by accounting for proceeds and disbursements on a daily basis. But the donation link was soon disabled by Nigeria’s Central Bank, as the government panicked about the flood of cash. The group, however, switched to cryptocurrency and the authorities went violent in apparent desperation.

Government vehicles were seen picking up some armed persons off the streets and releasing them around protest venues in Abuja and Lagos. Protesters were attacked by armed strangers who hijacked the protest and staged a reported jail break in Edo State. Organizers in Lagos, which was the center of the protest, were still able to maintain crowd control as protesters kept daily vigil at the Lekki Toll Gate, a highbrow area of Lagos, before mayhem descended on the night of Oct. 20.

Protesters sat peacefully on the ground, sang the national anthem and waved the national flag that evening, as soldiers arrived. Unprovoked, the officers from the Nigerian Army proceeded to shoot into the crowd, injuring dozens and killing at least 11 people. DJ Switch was on ground and streamed the shooting live at the risk of her life. News of the shooting sparked violence in Lagos, as rioters unconnected to the protest began a burning and looting spree the next day. Other states soon broke out into violence that lasted over a week, which targeted police stations, as well as other public and private property. In order not to aggravate an already tense situation, organizers at different levels called for the suspension of the campaign.

Global and local outrage at the shooting compelled the Lagos State government — which initially denied inviting the army, but later admitted to doing so — to set up judicial panels of inquiry. In the meantime, an investigative report by Premium Times indicted the state government, police authorities and the Nigerian Army in the carnage and confirmed the killings. Pent-up youth anger endures over the incident. The hashtag #ItIsNotFinished trended days after, keeping the spirit of the agitation alive.

While protesters immortalize their rage in hashtags and digital archives, the government has begun efforts to shrink the civic space and ensure a protest of this type never happens again. Minister of Information Lai Mohammed and some Lagos lawmakers, who are members of the ruling All Progressives Congress, exhumed a perennial debate about “regulating social media” in the country. In the aftermath of the protest, the government has frozen the bank accounts of some protest supporters. Some wanting to travel have had their passports seized.

Some activists, meanwhile, suggested that the protest should mutate into a political party. They see that as a path to addressing #EndSARS grievances, which transcend police brutality and include other core issues like political restructuring, governance and human rights.

Others have rightly argued that #EndSARS as a political party has little prospect. Police brutality unites Nigerian youth across social and economic classes but Nigerian politics has not. Ethnic and religious fault lines remain. In fact, the movement was seen by many in the north of the country as a power-grab — which explains why all counter-protests emanated from that region. That is where the president is from, and SARS operatives in the region have been known to work with better discipline.

Waging Nonviolence depends on your support. Become a sustaining member today and receive a WNV T-shirt!.

Even in southern Nigeria, with different ethnic groups, the unity of the protest was soon shattered with violence. A narrative suspected by many to be engineered by politicians — claiming the arsonists and looters were Igbo people (southeasterners) bent on destroying the economy of the Yoruba (the southwest) — gained traction. Calls for reprisals followed, and tension mounted.

For days, #EndSARS supporters on social media worked tirelessly to debunk these narratives, which later fizzled out as many Nigerians, including the Yoruba, denounced it. A political future for the protest is not impossible, but the movement needs time to build on existing energy, learn the playbook of political detractors and develop an enduring blueprint.

At the moment, the country knows a seed has been sown. The youth will never forget and supporters are taking a break to study developments. No one knows exactly when, but there’s little doubt that Nigeria has another date with the protest. Perhaps it will resurface with another name, but the character will be the same. A digitally smart generation for the first time has tasted social power for a few weeks and, like the old foxes with a grip on Nigeria, they will return.