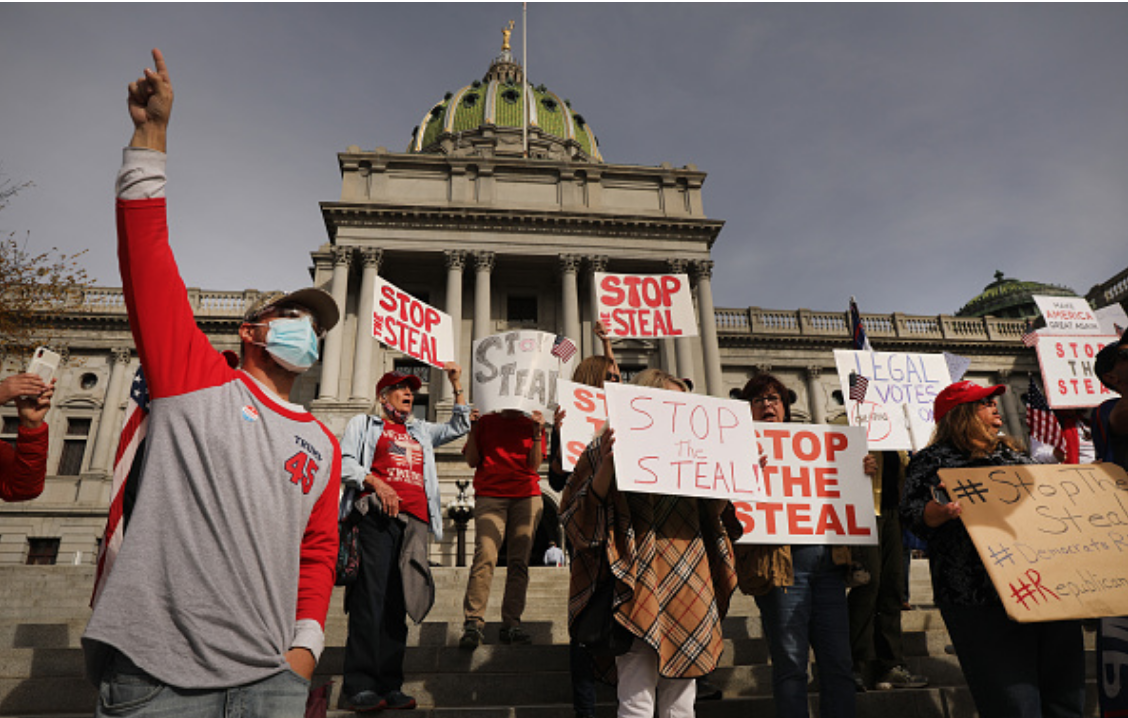 I’m encountering a great deal of alarm among progressive activists regarding continued Republican claims of a stolen election. Do these anti-democratic efforts mean a coup attempt is under way?

Despite being among the first to write about the possibilities of a coup, I have to say (as of this moment) the answer is “No.” My colleagues at Choose Democracy — who have been preparing Americans to defeat a power grab for the past several months — have also stopped short of describing what we’ve seen and heard this week as a coup. In a release today, they said: “What we have seen has been slow, poorly rolled out, and has none of the surprise elements associated with a traditional coup.”

So what are we to make of the Trump campaign’s lawsuits, Republicans refusing to honor the election results and the Department of Justice looking into “allegations” of supposed voter fraud? If this isn’t a coup, then what is it?

The politics of grievance

I believe Trump’s “stolen election” claim is a choice to continue a kind of politics that has served him well in the past — so well that he’s re-shaped the Republican Party in its image. Trump specializes in the politics of grievance.

Millions of words have been written since 2016 about manipulating grievance to gain political power. The question for the politics of grievance is never whether or not something is true — it can be laughably untrue. The claim that Barack Obama wasn’t born in the United States was obviously bogus, but it was useful as a way to reduce his legitimacy as president and fit nicely into the politics of grievance.

I believe the point of claiming a stolen election is not to set the stage for a coup, but to add more juice to the right’s list of grievances for building political power in the future. The bigger the publicity that’s produced around this claim, the more juice is created — and that’s what they are trying to do now.

Count on it: the juice will ferment in 2021 and be stronger in 2022. Everything that hurts Americans will be laid on the door of Biden, “who was fraudulently elected!”

What can we do about it?

First, as the Choose Democracy team advises, “Breathe.” Our anxiety doesn’t actually serve us in this case. Additional immediate action steps are also recommended on the site, including writing elected officials and supporting and thanking poll workers.

Second, in the coming months pay attention to the grievances that arise from the circumstances of living in a declining empire. It’s no accident that exit polls showed more people who earned less than $50,000 favored Biden than those with higher incomes. That was also true for those who didn’t work full time. More people also favored Biden who saw the nation’s economy as “not good” or “poor.”

It makes sense: More well-off people supported Trump more often because they are more able to insulate themselves from the deteriorating conditions of American life.

The Green New Deal is a vision that pays attention to some of the real grievances: job insecurity, climate disasters, neglected infrastructure, exploding rents.

The third thing we can do is build a liberatory political culture that substitutes empathy for political correctness. The electoral map makes plain the results of bi-coastal condescension. If you were looked down on, why wouldn’t you want a champion who says “Fuck you” to elitists? This is a grievance that’s within the power of progressives to do something about. As I’ve explained many times, the make-over starts with a sober examination of how classism distorts our understanding of oppression.

A great place to start is with sociologist Arlie Russell Hochschild’s beautifully-written book about Republicans in Louisiana, “Strangers in their Own Land: Anger and Mourning on the American Right.”

In some ways we’re in good shape for growing in numbers and power in the Biden years. On multiple issues we’ve been on the move, and we’re not likely to make the tragic mistake of progressives in the Obama years of expecting the Democratic Party to do the job for us. The neoliberal Democratic Party leadership will do what Democrats did last time: allow conditions to grow that invite a grievance-based Republican take-over in the next election.

Empathic social movements that retain a big picture of our country and world — and stay independent of co-optative moves from the Democrats — can grow rapidly by developing visions like Medicare for All that respond to the real needs of people, especially in rural areas, who otherwise are tempted by the grievance party. Police and public safety are one example of an issue mired in the dynamics of racism until more work in alternative visioning is done.

We can do all this. The workshops of Choose Democracy were designed to help prepare for movement-building on the chance we wouldn’t need to defeat a serious coup attempt. That chance has arrived.