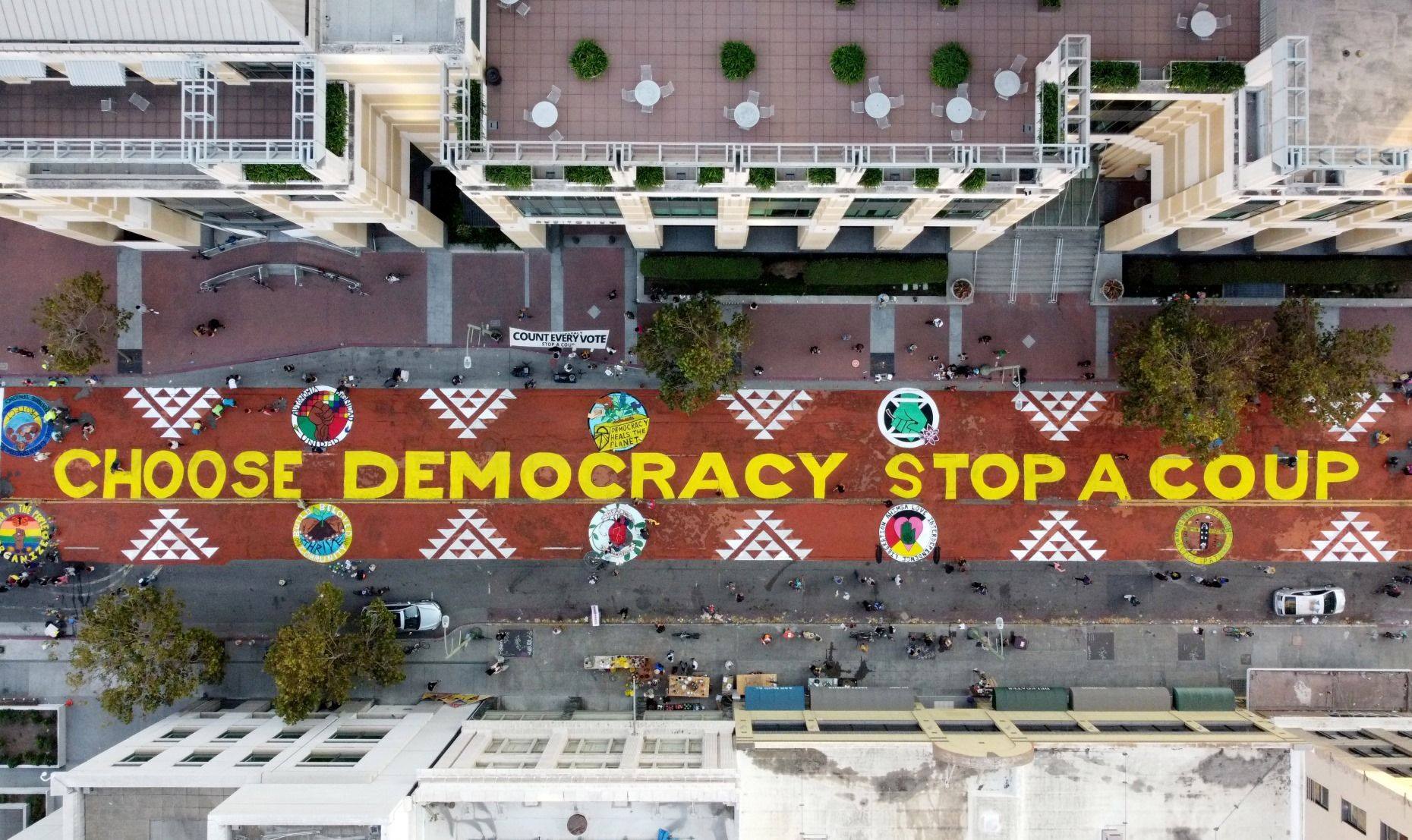 Choose Democracy — the whirlwind start-up that trained 10,000 people to prevent an election-related power grab — started with just three folks. Two had full-time jobs and small children. The other was 82 years old. Over the summer of 2020, Daniel Hunter, Jenny Marienau and George Lakey observed alarming signs that Donald Trump might not go quietly if defeated at the polls. As experienced trainers and organizers, they knew that preparation helped people to act powerfully. So they decided to prepare people to resist a potential coup based on nonviolent strategies that have worked in other countries.

The articles George and Daniel published here on Waging Nonviolence went viral to a degree this site has never experienced before. Daniel’s “10 Things You Need to Know to Stop a Coup” reached nearly 800,000 readers just on its own. Soon, Choose Democracy was getting featured in the kinds of publications most activists dream of: The New Yorker, The Atlantic, The Guardian and Boston Globe, among others. By Election Day, their Pledge for Democracy had 40,000 signers, four times their original goal. More importantly, the principles they were promoting had influenced the preparations of labor unions and a wide network of grassroots organizations determined to resist if the will of the voters was subverted.

Choose Democracy progressed so quickly in large part because it hoisted its sail just in time to catch a big wind. But good organizing mattered, too. For me, joining the team as Trainings Coordinator taught me five principles I want to practice in my post-Inauguration Day social change work.

1. You don’t need to figure everything out before you begin.

Unlike many people with a good idea, Choose Democracy’s founders did not wait to take action until they had a clear plan and an organizational chart. Especially in the early stages, they recruited a few friends, assigned roles, then let each team run with their ideas rather than establish a central decision-making structure that would have slowed things down. This model enabled them to launch a website quickly, circulate the pledge, fundraise and start training — while still figuring out things like the best way to integrate training registration with their new email list.

On Sept. 23, George and Zein Nakoda launched the first training, assuming that it would be tweaked as they learned what worked. They soon paired it down from four hours to two. By the third training, they hit the Zoom account’s 1,000 maximum and needed to upgrade.

When it became clear that many more training sessions would be needed, additional trainers were recruited, and I was brought on as Trainings Coordinator. Zein warned me, “We are building the plane while flying it,” and it was true. Systems were set up to respond to needs as they arose. Only in October, after the plane was mid-air, did we hire a General Manager who, hosted brief weekly meetings for the team to coordinate, where needed.

There was one important thing Choose Democracy did figure out before take-off: what role it wanted to fill. This was partly based on what the founders had to offer — a century of training experience between them, as well as two prolific writers — but also what they saw in the activist ecosystem. There were many established organizations with the ability to mobilize large numbers of people, but at the beginning no one was putting forward a clear vision of how best to use those people to thwart a coup, if one occurred.

As groups started stepping into that space, Choose Democracy leaders connected with Momentum, Hold the Line, Protect the Results, BlackOut Collective, and the Movement for Black Lives, among others. Clear roles helped groups to support and learn from each other without getting bogged down in excessive coordination.

As Daniel Hunter reminded the Choose Democracy team in a mid-September Slack message, “Our theory of change isn’t built on growing as an organization. It’s seeding the ideas and lessons of evidence-based strategy about how coups get stopped, so the entire broad movement is more prepared. We are acting as visionaries.” That clarity enabled Choose Democracy to focus on the simple goal of spreading its message. The digital team made a series of effective, creative videos, including “Sock Puppets Are Plotting a Coup,” which was retweeted by CNN’s Van Jones, among many others.

3. You don’t have to be workaholics to be effective.

Choose Democracy’s founders came out of a model of organizing and training that values the whole person and doesn’t believe that working people to exhaustion is the way to create a better world. Over my weeks on the team, I saw people announce that they needed to step back for a bit and watched others step up to cover them. One team member — whose experience is mostly working on elections — remarked how different this was from the groups he had worked with before, where announcing that you were taking care of yourself for a few days was anathema. It reminded me of the advice that went around after the last presidential election, that activism was like singing in a choir. We have to take turns breathing in order to collectively sustain the note.

This approach enabled the team to navigate two family deaths, two back surgeries, a broken hand, wildfires and a toddler who wasn’t sleeping — all without the group slowing down. It also meant that people weren’t too stressed out to think clearly, which became particularly important when Trump started claiming election fraud.

There were very good reasons to be afraid of a coup. Obsessively watching the election results and Trump’s blustering afterwards were nerve-wracking. But in the weekly team lead meetings, we acknowledged our anxious feelings and distinguished them from the facts, as best as we could assess them. When Trump refused to concede — something we always knew was likely — we were outraged by his antics, but kept our focus on the levers of power, not his tweets.

When we grounded ourselves in evidence, we saw ordinary, bipartisan people across the United States upholding the integrity of our election, especially local election boards and judges. Encouraging local officials to do the right thing was a key part of our strategy, and it was working. Those politicians who supported Trump’s claims were damaging the public’s trust in our electoral system for their own political advantage, but they were not putting in place strategies that would change the results.

Despite concerning incidents — like the Republicans in Michigan who refused to certify Biden’s victory — we mostly saw scurrilous lawsuits and political theatre, not an actual plan to grab power. Unfortunately, after four years, Trump loomed so large in our psyches, it was hard for many people to tell the difference. The national strikes and widespread resistance many had planned for didn’t make sense in this situation.

5. Strategy requires us to assess what will be most effective in a particular situation, not to simply do what we’ve done before.

One message of the Choose Democracy trainings was that defeating a coup was going to be different than the knee-jerk protests many in the United States were used to. We were especially concerned about the risk-benefit of large gatherings that could attract violent attacks, which felt like a very real possibility. Violent clashes would benefit Trump, who warned — during the Portland protests over the summer — that he couldn’t let Joe Biden take over if the country was in chaos.

Still, along with many emails from people grateful for our reassurance, we got some anxiously demanding that we tell everyone to go protest or vigil in their local town square — even as our quieter strategy was working, and there were reasons to think that public protests would play into Trump’s hands. Answering a few of these emails helped me appreciate how much current activism is based on the assumption that showing our outrage is how we make change rather thinking critically about how power works and how to leverage it.

With the Texas Supreme Court case and the Electoral College vote behind us, the likelihood of a coup is extremely remote. Despite traitorous interference from too many Republicans, Trump never lined up enough co-conspirators with the power to pull it off. Yet, clickbait headlines stoking people’s fears continue. Choose Democracy has planned one more training webinar for December 15, where we will reflect on what we learned during this unprecedented period and celebrate the ways people power worked. We will continue watching events closely through the inauguration, along with our friends at IsThisACoup.com, but repairing the tattered public trust will fall to others. It is outside our time-limited niche.

As I resume my courses on nonviolent activism, as well as climate activism, I want to remember what I learned from this whirlwind experiment. In particular, I plan to push the people and groups I work with to think more clearly about what might be effective in a particular situation. The stakes are too high — and the issues we care about too important — to stay stuck in the cycles of reactive outrage protest.