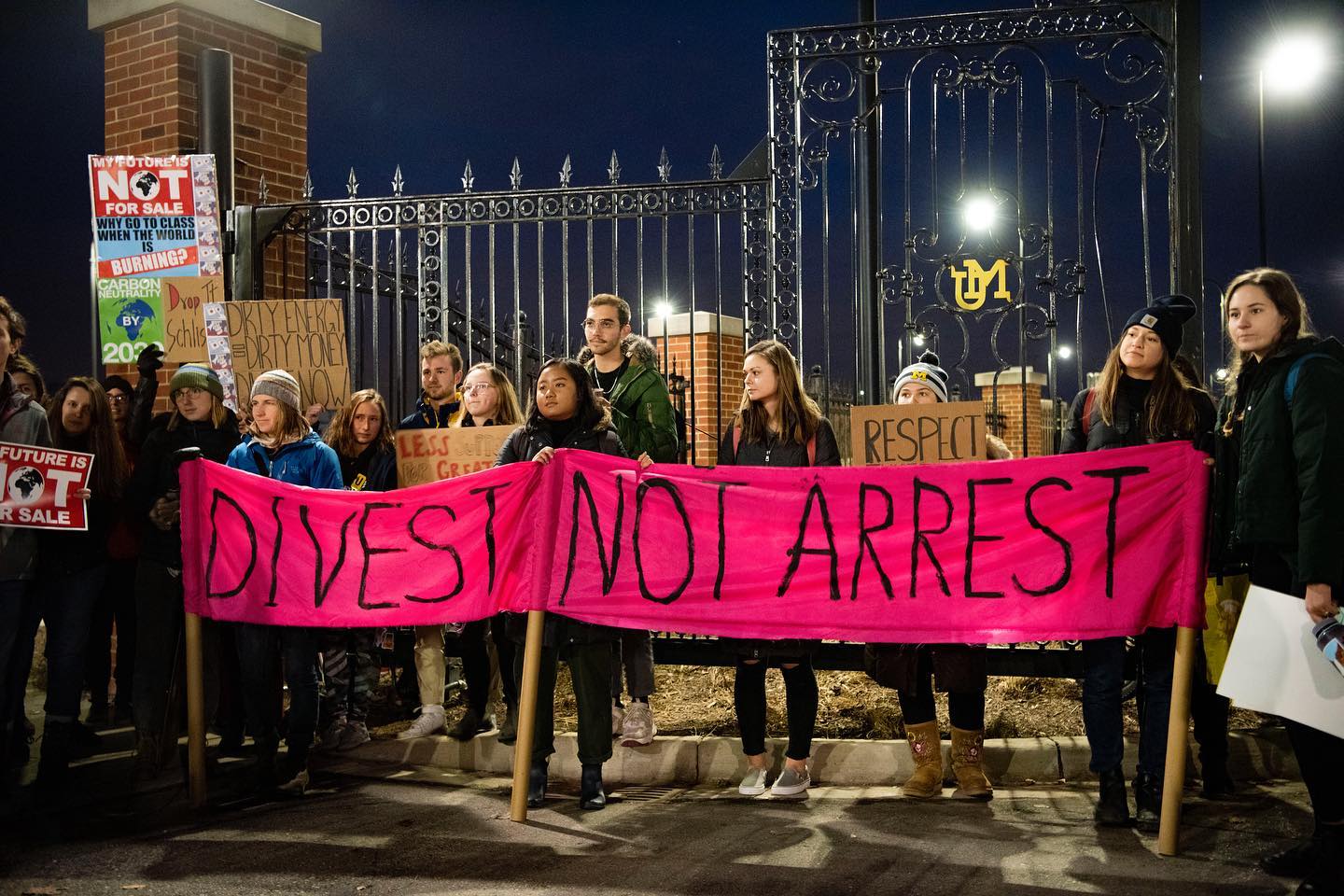 Last month, the University of Michigan became the latest to accept the obvious — that investing in the destruction of society is fundamentally counter to the mission of higher education. With its endowment of $14.2 billion, Michigan now becomes one of the largest public universities to commit to divesting from fossil fuels.

I couldn’t have imagined writing that sentence only two years ago, when I watched as 10 of my peers were escorted out of the university’s central administration building in handcuffs after an exhausting eight-hour sit-in. But as many other student divestment campaigns have learned, organizing — with some strategic direct action — eventually pays off.

I got involved with the DivestInvest group at Michigan in 2014. Like all nascent movements, we were politically naïve. We played by the rules, so to speak — attending Board of Regents’ meetings, giving polite speeches, collecting petition signatures — doing all the “right” things that we thought would persuade university administrators. Until, of course, they shut us down. In 2015, university President Mark Schlissel publicly rejected fossil fuel divestment as merely “symbolic,” saying that it wouldn’t make any difference — language that was quickly gobbled up by conservative outlets and fossil fuel think tanks.

As a result, DivestInvest reformatted, and a new, broader-scoped student group emerged in its place: the Climate Action Movement. In addition to our focus on the local footprint of campus, we argued that true carbon neutrality would not be possible for an institution that was actively expanding upon its $1 billion of investments in fossil fuels.

With the Intergovernmental Panel on Climate Change 2018 report limiting our window of meaningful action to about a decade, we decided to up our game. Of course, we continued with the petitions, speeches and op-eds, but after watching the regents do little more than nod their heads month after month, we realized we needed more persuasive tactics that matched the urgency of the crisis.

In March of 2019, along with the help of local high school students, we organized the first large-scale climate strike in Ann Arbor. With over 3,000 people in attendance, we rallied on central campus and marched through the streets, culminating in a massive sit-in at the president’s office. While hundreds crammed into the overflowing office space for nearly eight hours, students spontaneously began writing letters to administrators and teaching each other about their corner of expertise in the climate crisis. As the hours passed and administrators ignored our list of demands, we decided to simplify the ask: Would President Schlissel agree to a public meeting with students to explain the university’s climate change policies? Remarkably, instead, the administrators arrested 10 of my peers.

The university’s actions resulted in a flood of press and calls of support for our campaign. After two weeks of continued daily sit-ins, the president agreed to a public forum where he stated this time, unequivocally, “We don’t divest.” The attention galvanized our movement, bringing in new students eager to take on the cause. Just a few months later we helped organize the largest climate change gathering in Washtenaw county history with over 7,000 participants attending the September Global Climate Strike. There, frustration with the university’s inaction boiled over.

In December 2019 we reached an inflection point. After digging into the upcoming Board of Regents’ meeting agenda, we realized the CFO of the university was planning to ask the regents to sign off on another $50 million investment in fossil fuel private equity. We, along with our allies in the One University Campaign, rallied around this with fury, emailing regents, writing speeches and planning a nonviolent blockade of the golf club house where the meeting took place — until the regents agreed to commit to divestment.

This time, not only did we get the attention of the press and the community, but we also had a rare chance to actually interact with some of the regents, as they waited for security to find another exit across the golf course. Forcing their hand to make these personal connections gave us strength and put a face to what, for them, had just been another noisy student group.

What’s more, for the first time ever, the regents voted to block the new investment. We were elated. Student organizers had just stopped $50 million from funneling into the fossil fuel industry!

A few months later, in February 2020, after continued pressure, the regents took the next logical step: a freeze on all new fossil fuel investments at the university. It was beginning to feel like we were winning the fight.

Of course, soon after, the pandemic hit and severely limited our capacity to organize. But we persisted and found new tactics, like mass email campaigns and car rallies. Still, with the freeze, the inevitable had been set in place: the university had finally acknowledged the ethical implications of their investments and thus could no longer continue business as usual. Finally, in December 2020, we heard from a few friendly regents that they would be formally considering fossil fuel divestment and that we would be invited to make our case — eight years of struggle condensed into a few 15-minute presentation slots.

We took a holistic approach, arguing that it’s not just about taking money from fossil fuel companies, but also reinvesting in a just transition to a zero-emission world. It’s about instituting ethical and sustainability guidelines for all investments so that institutions stop blindly profiting off the exploitation of others. Perhaps most importantly, we argued that this is about changing the social landscape of what is acceptable for institutions of higher education. Just as the University of California system’s recent divestment facilitated our case, the University of Michigan would now become another domino that students could use to increasingly pressure their respective administrations.

Of course, we didn’t get everything we wanted — there’s still no comprehensive policy on ethical endowment management and no concrete timeline for divestment — but we will keep fighting to hold our administration accountable. If there’s one thing the abrupt turn-around at the University of Michigan makes clear it’s that dedicated organizing works. Universities count on student turnover and that a few rabble rousers will graduate, leaving the movement to fizzle. We persisted by expanding our scope and allying with other groups fighting for social justice, capturing the frustration of our community with strategic messaging, actively recruiting and training new students, and waging nonviolent direct action when necessary. It may have taken eight long years, but — in the end —  we took away another $1 billion from the fossil fuel industry.