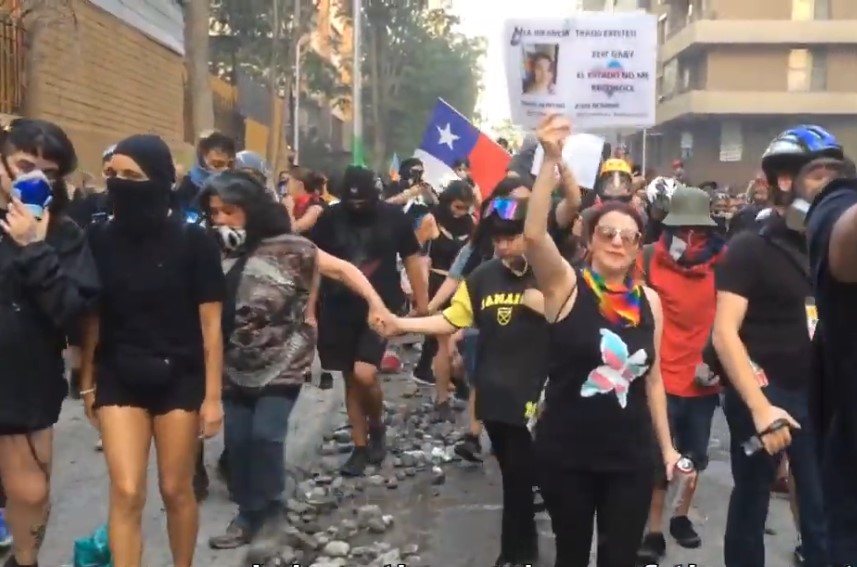 Mass protests that began in 2019 in Chile — and have deep roots in the country’s militant history of resistance to neoliberalism — are about to bring about a new constitution. This is an attempt to correct the constitution imposed under military dictatorship in 1980 (with the guidance of Milton Friedman and the so-called Chicago Boys).

When the government attempted to raise the price of mass transit in 2019, the country erupted in anger.  It was one more pressure on a poor and working class that had already been crushed by stagnating wages and rising prices, as well as decades of repression. Soon, the nation was on fire, with millions in the street directly confronting police and burning down symbols of the dictatorship. Despite facing brutal force from the military, the movement refused to go away — in fact, it grew.

In 2020, I spoke to organizers and activists who have been in the streets and behind the scenes. While most of them are seeking deeper systemic change than the constitutional convention will likely bring, they spoke of hope and energy that they received from being part of this historic moment.

Beyond taking to the streets and pressuring the conservative government to accede to these demands, they have built alternatives, like neighborhood assemblies, feminist spaces and organizing collectives.

This video features excerpts from interviews with Laura Manzi and Barbara Berríos, of the Brigada Laura Rodig, Coordinadora Feminista 8 March, a feminist art and propaganda group — named for a radical Chilean artist of the mid-20th century — that intervenes in public space through direct action. It also features Rodrigo Faúndez — a board member of the Movement in Defense of Water, Land and the Environment — and Israel Acevedo H, part of the Neighborhood Assembly of Santa Julia and the organization Solidarity FCL.

There is no doubt that the pandemic interrupted the momentum of this movement, forcing people indoors and allowing the police to take over the public squares that had become sites of mass resistance. While they generally support the constitutional convention, some organizers fear that this process will further drain energy from the street and into efforts to reform a broken system. Now, with a general strike in Colombia, there is even more hope for a pan-Latin American movement.

Either way, the May vote marks the beginning of a new phase of struggle and an opportunity to undo another piece of the legacy of the Pinochet dictatorship. And the movement is not done. “The people really don’t believe anything from the politicians,” says Barbara Berríos. “They believe in what they’re building.”

This reporting would not have been possible without the journalists Bree Brusk and Roberto Manríquez, who provided background and introductions. Additional thank you to Karina Stenquist for translations, Caleta Adams for additional filming, and Kerrie Lynn, Kirby, and T. Duncan for feedback.