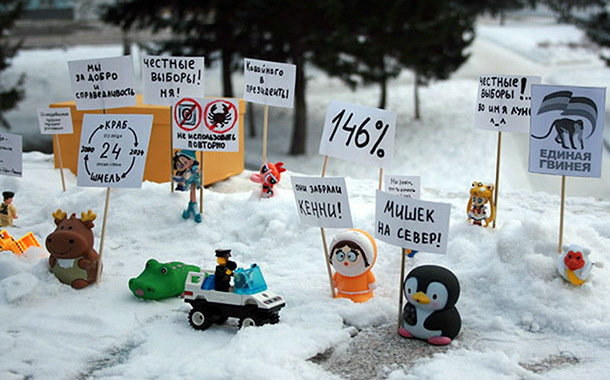 At 7:30 p.m. on Feb. 5, 1982, the streets of Swidnik, a small town in southeast Poland, suddenly became crowded. People strolled and chatted. Some carted their TV sets around in wheelbarrows or baby strollers.

The residents of Swidnik had not gone insane.

They were protesting the lies and propaganda they were hearing on the government’s TV news, which aired at that time every night. Two months earlier, in an attempt to suppress unrest and crush the Solidarity trade union, Gen. Wojciech Jaruzelski had declared martial law in Poland.

As the protests began to spread to other towns, the communist government faced two unattractive choices: arrest people for simply walking around, or let the symbolic resistance continue to propagate. Because the Polish authorities were put in a situation where they had no good options, the Swidnik walkabout could be considered a dilemma action.

This is one example cited in a recent publication called “Pranksters vs Autocrats: Why Dilemma Actions Advance Nonviolent Activism,” written by Srdja Popovic and Sophia McClennen.

Popovic is executive director of the Center for Applied Nonviolent Action and Strategies, or CANVAS, an organization that trains activists around the world in civil resistance strategies and tactics. From real-world experience, he knew that using creative tactics like dilemma demonstrations and humor — what the authors call “laughtivism” — could be powerful tools for resisting authoritarian regimes or struggling for human rights.

It was his friend McClennen, a professor at Penn State University, who suggested they do a pilot study to quantify the value of such methods and include the results in the book. The research examined 44 dilemma actions between 1930 and 2019.

The case studies included the well-known barrel stunt concocted by Otpor, the Serbian youth group that was instrumental in ousting dictator Slobodan Milosevic in 2000. Otpor pranksters found an old barrel and painted Milosevic’s face on it. After alerting the press, they placed the barrel, along with a heavy stick, in a busy upscale shopping district. A sign instructed passersby to “smash his face for a dinar. ” Soon people were lining up to deposit a coin and take a whack at their leader’s image.

Eventually the police arrived and, with the Otpor perpetrators laughing safely from a nearby coffee shop, the police vacillated. Do they arrest the mostly middle-class families who were standing in line, and risk provoking more opposition to the government? Or do they let the protest continue and potentially spread to other parts of the country? The police chose a third option. They arrested the barrel, and the next day the nation laughed when the opposition press ran pictures of the cops wrangling the barrel into their squad car.

Another case included in the study occurred in Russia. When the residents of a Siberian city were denied a permit to hold a street protest in 2012, they found a humorous workaround — have their toys demonstrate instead.

Activists staged a group of teddy bears, Lego people, toy soldiers and the like, all holding signs denouncing electoral corruption. Photos of the rebellious figurines spread across Russia, and soon others were reproducing the action.

Putin’s government was faced with two distasteful options: allow the dissent to flourish by ignoring the protests, or crack down on the tiny toy tableaus and look silly. The government chose to outlaw the action. Toys are not Russian citizens and therefore can’t take part in meetings, explained a government official in issuing the toy protest ban.

Like most tactics, dilemma actions rarely lead to the immediate granting of demands by the adversary. But generating a dilemma can sometimes dramatize injustices or contradictions in an opponent’s policies, making the invisible visible and changing the narrative around an issue. In fact, initial results of McClennen’s study suggest dilemma actions have the potential to provide a number of benefits that can help activists build successful civil resistance campaigns.

For example, protests that create dilemmas for an opponent are extremely successful at garnering media attention, attracting more supporters, and reducing fear among activists. The study also showed that incorporating a humorous element is an effective way of reframing the image of an authoritarian leader — from powerful or scary to weak and vulnerable.

McClennen, who stresses the research is very preliminary, is working with CANVAS to do a more rigorous study. “I do think … we will be able to show that a group can have outsized impact … if they use dilemma actions,” she said. “We think it, but we want to prove it.”

“It’s very important to calculate the costs and risks affiliated with a tactic, and involve your opponent’s reaction in the original planning process.”

There have been a few other academic efforts to analyze dilemma actions. “Pranksters vs Autocrats” incorporates ideas from a 2014 paper by Majken Jul Sørensen and Brian Martin that attempted to define some core characteristics of dilemma actions, and identify factors that can complicate an opponent’s response options. Sørensen is associate professor of sociology at Karlstad University in Sweden, and Martin is emeritus professor at the University of Wollongong in Australia.

Martin says that many activists focus solely on what they are going to do — how can they express their anguish about a particular issue. But when they think in terms of planning a dilemma action, they are forced to consider how the other side is likely to respond.

“And as soon as you do that, then you’re thinking strategically instead of just reactively or emotionally,” Martin said. “And I think that’s one of the great values of dilemma actions. They make you realize it’s an interaction, and you need to think about what the opponent might do, and what their choices are, and select your own options in that light.”

The more you think the process through, the more likely you will succeed, says Popovic. “It’s very important to calculate the costs and risks affiliated with a tactic, and involve your opponent’s reaction in the original planning process,” he added.

All acts of resistance operate within preexisting situations. The objective of any such action should be to change the situation so that it is more favorable to the resisters, or less favorable to their adversary. And, in fact, there is no bright line between dilemma actions and other types of nonviolent protest.

Conventional nonviolent protests and dilemma actions share similar dynamics, because simply refusing to use violence can sometimes create a quandary for the opponent. Imagine human rights activists in an authoritarian country organizing a traditional nonviolent protest march. The dictator may be forced into something of a dilemma.

Ignoring the demonstrators or acceding to their demands may make the ruler appear weak, increasing the prestige and power of the human rights group. On the other hand, beating or arresting nonviolent protesters can seem heavy handed, bringing sympathy and additional support to the group.

So in principle, says Sørensen, who co-wrote the paper on dilemma actions with Martin, any nonviolent action might be considered a dilemma action. “It’s a continuum of different types of actions — some of them obviously involve a dilemma while for others the dilemma is not very clear,” she explained. “The circumstances will play a big role, and whether it is a dilemma will depend on what context are we talking about.”

“Some targets tend to be more vulnerable or more susceptible to dilemma actions. People with big egos, for example.”

Deliberately creating dilemmas for an opponent is not always possible or appropriate. But thinking about how an adversary might react can help inspire creativity when planning any resistance action. Taking into consideration the characteristics of your opponent — their vulnerabilities, motivations, goals, tendencies and so on — is always useful, but essential when designing a dilemma action. That’s because there needs to be a target that will experience the dilemma, and some anticipation of what choices that entity will make.

Getting the target to overreact can be an effective strategy in certain situations. “Some targets tend to be more vulnerable or more susceptible to dilemma actions,” Popovic said. “People with big egos, for example, are very often good targets.”

But cornering an opponent can also risk a violent crackdown. “It’s a very thin line,” Popovic added. “You really don’t want a lot of people to get hurt because of any tactics … because that causes fear.”

While many dilemma actions target a group, like the police or a government, Popovic thinks that singling out an individual is better because it puts the onus of decision on that person. “When you target an institution, you want to figure out who are the people in this institution,” he explained. “When you are personalizing your tactics, it always works better than if you are generalizing.”

A well-known example of a personalized dilemma action unfolded during the height of the Iraq War. Cindy Sheehan, the mother of a soldier who had been killed in action, set up camp outside George W. Bush’s ranch in Crawford, Texas while he was vacationing there. She vowed not to leave until the president met with her and explained the purpose of the war, and why so many young Americans continued to die.

Over the next three weeks, hundreds of supporters — politicians, celebrities and other bereaved parents — visited the encampment. Almost daily international press coverage of the standoff increased the pressure on Bush, leaving him no good options.

While sitting down with a grieving mother posed risks for the president by spotlighting the human costs of the conflict, every day he refused to meet brought more publicity for the growing antiwar movement. In the end Bush chose not to have the meeting, but the action was instrumental in shaping public opinion against the war.

Dilemma demonstrations have long been used, albeit sometimes accidentally or unconsciously, to leverage gains in resistance campaigns, but only recently have they become the subject of serious study. Works like “Pranksters vs Autocrats” offer insights into the dynamics of dilemma actions, as well as provide some hard evidence on the advantages of this technique.

The main value in thinking about dilemmas may be that it requires activists to plan actions that take into account how the other side is likely to react, and design tactics in ways that make the opponent’s response less effective. This approach can lead to protests that are proactive, strategic and ultimately more compelling.