No doubt you had already figured out the knives are out in the Biden’s administration over who is going to take the fall in Afghanistan. Things took a strange twist with the forthcoming Woodward book in an attempt to turn the tables on Trump one last time and finish him. At least that is the suspicion, or was it Milley who planted much of this story thinking it would elevate him as the man?  The question left is how much truth is there to it, and if Milley went to the dance or is it more of a figment in Woodward’s mind.

The framework of the CNN article is that General Milley:

…”called a secret meeting in his Pentagon office on January 8 to review the process for military action, including launching nuclear weapons. Speaking to senior military officials in charge of the National Military Command Center, the Pentagon’s war room, Milley instructed them not to take orders from anyone unless he was involved.

First here is the orange man himself with his take.

Trump himself has difficulty believing the Woodward on Milley.

We have Tucker Carlson. Retired Army colonel reacts to accusations against Gen. Mark Milley on ‘Tucker Carlson Tonight’ and gives us a good overview.

The Conservative Tree House posted an interesting outline of the players involved yesterday before much of the story had shaken out. Worth checking it out.

Bonus time! All the old players want in on the game.

Alexander Vindman was the national security council operative who worked with the CIA to frame Donald Trump by leaking a manipulated transcript of a presidential phone call.   Today he tweeted this about General Mark Milley: 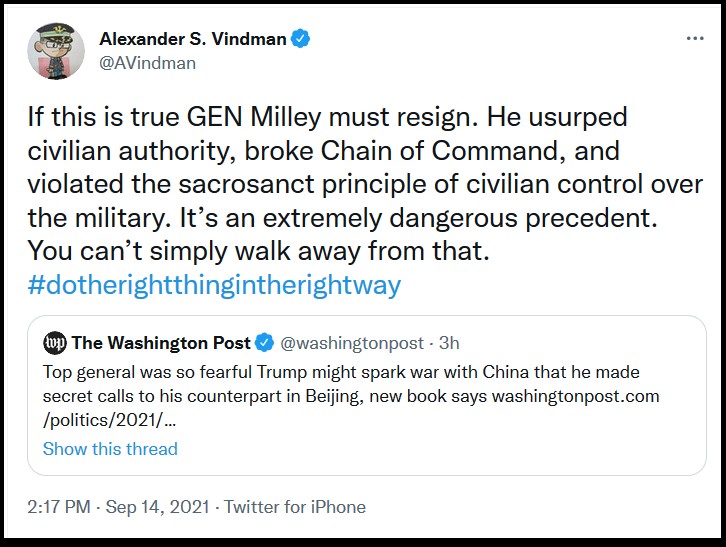 And that for sure is the best of the swamp today.

For the best in conservative news push the button.