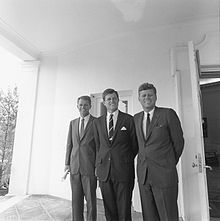 The separate reports announced late this month show that JFK’s 1963 death in Dallas and RFK’s 1968 death in Los Angeles were each the product of conspiracies to thwart the democratic process of elections and accountability via the criminal justice system and have resulted in long-time cover ups that continue to thwart justice and other aspects of civic life.

The reports were prepared by the non-partisan Truth & Reconciliation Committee (T&R), which was founded in January 2020. The reports are available in full on the committee’s website:

Also, the Justice Integrity Project, whose editor was a founding board member of the T&R Committee, will excerpt the reports, beginning with today’s column focusing on JFK: The Real Story. The brothers are shown at right, with Robert (D-NY) at left, John at right, and their younger brother, Sen. Ted Kennedy (D-MA), at center.

Excerpted at the bottom of this column is a news release on the RFK report that is planned for distribution on Nov. 29.

The reports each carry relevance to developments expected in the next few weeks even beyond the intense civic interest that has generated large numbers of book, films and conferences since the deaths. 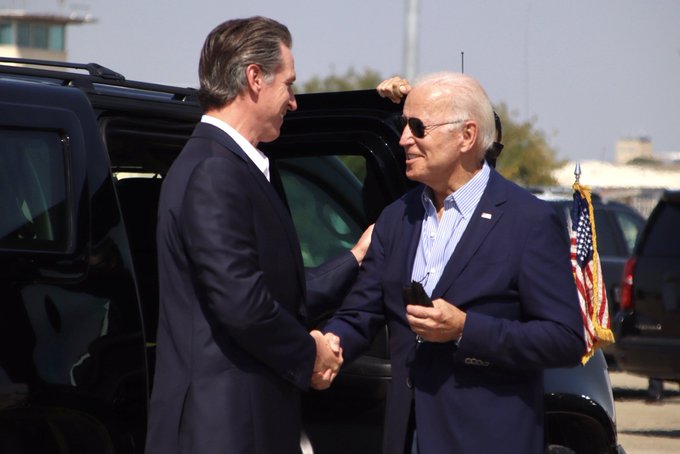 California Gov. Gavin Newsom, shown at left greeting President Biden in September, and the state’s full parole board must decide soon whether or not to affirm a recommendation in August by state parole board panel that RFK’s accused assassin, Sirhan B. Sirhan, deserves release under the state’s generally applicable policies for prisoners. Sirhan has been jailed since RFK’s shooting at the Ambassador Hotel shortly after midnight on June 5, 1968 following California’s presidential primary the previous day.

Separately, Biden has announced that his administration will disclose by Dec. 15 an unspecified number of the estimated 16,000 classified records pertaining to the JFK assassination that have been withheld from the public for supposed national security reasons despite the mandate that they be released under the congressional mandate of 1992 JFK Records Collection Act that President George H.W. Bush signed into law in late 1992 under intense public pressure.

The new report assembles considerable evidence that accused assassin Lee Harvey Oswald was a “patsy,” as he claimed to be before Dallas nightclub owner Jack Ruby fatally shot Oswald on live national television at the Dallas police headquarters two days after JFK’s assassination on Nov. 22, 1963.

Who Did What? Why?

As visitors to this site know, our project has for years published separate, updated “Readers Guides” to the JFK and RFK assassinations that compile extensive lists of the major books, films, archives and research conference focused on each death, with inclusion of materials favorable to conventional and official accounts, as well as alternative analysis.

By contrast, these two new reports by the T&R Committee pull the evidence together from disparate, credible sources in order to make coherent narratives of how and why JFK and RFK were killed. In doing so, the reports shred the official accounts in their descriptions of Oswald and Sirhan as Kennedy-hating sole gunmen. 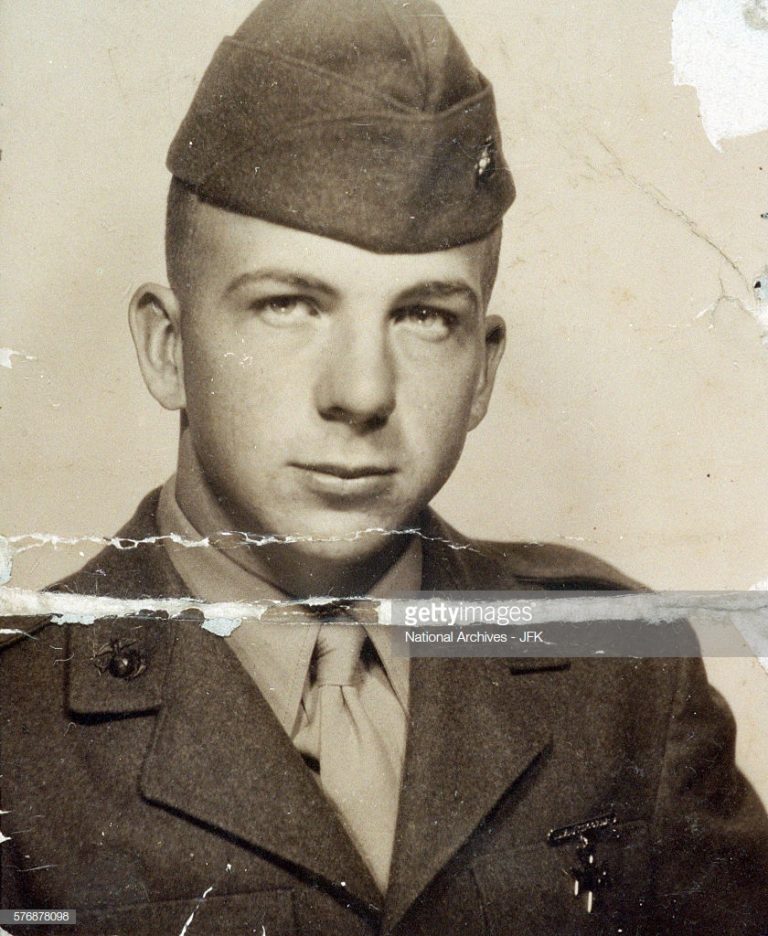 In the case of Lee Oswald, considerable evidence exists that the former Marine (shown at left) was working in covert fashion with U.S. military and intelligence personnel before the assassination, and could not have fired all of the shots recorded during the six relevant seconds shown on businessman Abraham Zapruder’s film. Oswald may not have fired any shots at all, according to the report,

Regarding Sirhan, the evidence shows that RFK was killed from the rear whereas Sirhan was in front of the senator at all times, according to witnesses. Furthermore, Sirhan – who admittedly fired some shots towards the senator – was using a gun with a capacity of just eight bullets.

Evidence exists that 12 to 14 bullets were fired at the death scene in the hotel’s pantry as RFK was exiting a speaking stage after just winning California’s 1968 Democratic presidential primary.

RFK is shown immediately at center below addressing a crowd in the hotel’s ballroom with a victory speech before he departed the room from the rear via a crowded kitchen pantry. (Photo via the JFK Library.) 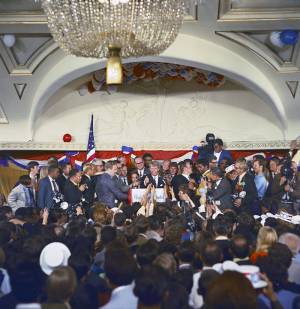 Sirhan’s guilt or innocence regarding firing the fatal shot at RFK is not directly relevant to his current parole proceeding. Sirhan’s defense counsel at his 1969 murder trial never argued for innocence on the basis of ballistics or other evidence. The parole board has never permitted introduction of such evidence in Sirhan’s parole hearings that began when he first became eligible for parole in the early 1980s.

But public perception is always a factor when elected officials must make decisions. And in the case of Sirhan, reader comments to relevant news articles this fall show overwhelming opposition to his release, regardless of the law. Many readers base their view on their belief that Sirhan killed RFK, with many insisting that they saw him do it — when, in fact, no video of the shooting has ever been known to exist and all video and still photos were taken after shooting stopped when Sirhan was being restrained by RFK’s aides.

This editor has served as a consulting attorney for the defense in recent years, working other attorneys. Most notable have been Dr. William F. Pepper of New York, who assumed the main role of defense attorney in 2007, and Angela Berry of California, a specialist in that state’s parole procedures and lead defense counsel for that aspect of the defense.

The current parole proceeding has so far been decided on the basis of evidence of Sirhan’s good conduct in prison, his youth at the time of the offense, his current age, 77, and most importantly an absence of evidence that he would be a threat to the California community if he is released. Sirhan’s brother, Munir Sirhan, has volunteered to house him in the family’s longtime home in Pasadena. As another option, the government of Jordan has offered to accept Sirhan Sirhan (shown in a 2016 photo) if he is deported. Reared in a Christian family, the two Sirhan brothers came to the United States at an early age from Palestine with their now-deceased parents.

• Multiple witnesses confirmed hearing at least 12 shots but their statements were ignored by police. The police also ignored three eyewitnesses who stated they saw a security guard, who was standing right behind Kennedy, pull his gun and one saw him fire it.

• The guard’s gun was never checked by the police or FBI and subsequent revelations show him lying about owning a gun that matched Sirhan’s .22 caliber pistol at the time of the murder.

The Truth & Reconciliation Committee that created the reports is named for a similarly named group in South Africa that sought decades ago to establish facts regarding racial abuses under that nation’s apartheid regime but without using the information for new prosecutions. The U.S.-based committee’s founding signers include two of RFK’s children, former RFK speechwriter Adam Walinksy and RFK friend and associate, Schrade, shown at right in a photo by Interesting Stuff Entertainment. At the time of the shooting, Schrade was a United Auto Workers executive who was shot in the head by Sirhan in the hotel pantry in 1969. Schrade for more than 50 years has sought a new investigation on the grounds that he does not believe Sirhan shot RFK. Other signatories include more than 60 other well-respected public figures versed in law, medicine and other civic affairs.

Those available through the committee for media interviews about the case include Shrade, plus:

• Denise Bohdan, an attorney and consultant to Sirhan’s legal team in the parole hearings. Her father, Fernando Faura, was a newspaper journalist who reported on the shooting and who informed the Los Angeles Police Department at the time about a likely accomplice, whom police ignored. In 2016, Faura  published The Polka Dot File Connection to the Robert F. Kennedy Killing, a book about the extensive evidence that he uncovered just after the shooting that was ignored.

• Dan Storper, Co-Chair of the Truth & Reconciliation Committee- and a prominent New Orleans-based business executive and author of a forthcoming book about the 1960s.

The Justice Integrity Project’s coverage of these cases and their continuing impact on American democracy will resume with excepts from the committee’s reports, beginning with those from the report on JFK’s death.

The conferences and postponed document releases build on millions of pages of previously declassified documents and many hundreds of books through the decades fanning widespread public doubts about official accounts. Those official accounts, most notably the 1964 Warren Commission report, assigned guilt for the president’s death solely to ex-Marine Lee Harvey Oswald. Flaws in the report largely ignored by government, academic and mainstream media foster lingering fears that watchdog institutions fail to probe and prevent civic tragedies and cover-ups, including in current times.

Today’s column surveys this fall’s major developments. These include the records release delay, the three conferences and Oliver Stone’s sequel, JFK Revisited, to his blockbuster film JFK three decades ago. The new documentary launched in the United States on Showtime on Nov. 22, the anniversary of JFK’s death.

This editor has published a book in the field this year, worked closely with leaders in records release advocacy and also spoke at two of the three November conferences.

One was organized by Citizens Against Political Assassinations (CAPA), shown via Zoom with details, on the weekend days of Nov. 20 and 21, with a free all-day session on Friday, Nov. 19 for students. The other was the JFK Assassination Conference, which was seen both via Zoom and in person at the Magnolia Hotel in downtown Dallas, beginning Thursday Nov. 18.

A third conference, organized since 1996 by the JFK Lancer event and publishing company, was its “November in Dallas” annual event, this year via remote viewing from Nov. 19 through 21, with heavily discounted admission for students.

Our project always seeks to promote all three conferences with the view that there is much to discuss, with many valuable perspectives deserving an audience.

An appendix below contains more details on these events, as well as excerpts from a number of news stories and commentaries this fall regarding the records release process and its implications, plus analysis of several recent assassination witness revelations.

This column is also the 57th segment of the Justice Integrity Project’s JFK Assassination Readers Guide, which lists major books, films, archives and interpretative articles, with an index and links in the appendix.

Shown also below is a report on the new issue of Garrison, a 398-page webzine published this month. This edition’s focus is on original commentaries about the 1960s assassinations of John Kennedy (JFK), his brother, Sen. Robert F. Kennedy (RFK), the Rev. Martin Luther King, Jr. (MLK) and Malcolm X.