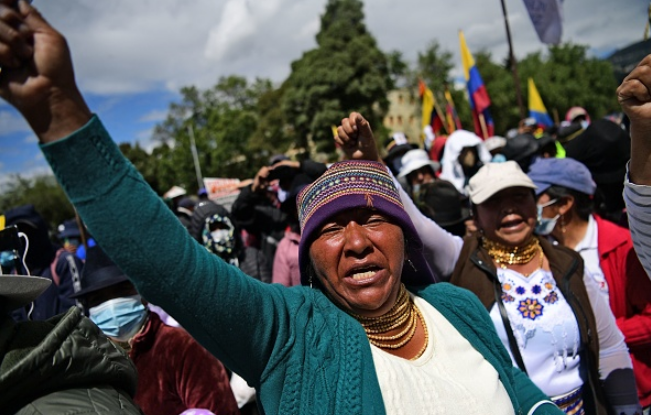 As Colombians celebrate the election of the country’s first ever leftist leader — propelled to power in part by voters galvanized by the country’s massive protests last year — across the continent, Ecuadorian protesters are clashing with their government over the future they want to create.

For years, Ecuador’s Indigenous movement has contended with escalating crises. Not only was the country amongst the hardest hit by the COVID-19 pandemic, but fiscal policies implemented by President Guillermo Lasso — and compelled by an array of international and multinational lenders — have levied a disproportionate burden upon the country’s Indigenous population. Now, amidst widespread repression and clashes with police as protests enter their second week, demonstrators are refusing to back down.

Since demonstrations began on June 13, led primarily by the Confederation of Indigenous Nationalities of Ecuador, or CONAIE, thousands of Indigenous protesters have marched through the capital of Quito and other regions, demanding the government take action to lower fuel prices, address rampant inflation, cease plans to privatize public sectors and provide funding to public education. The protesters have been blocking highways, and in some cases, puncturing the wheels of buses, forcing passengers to walk.

“We had to resort to resistance,” said Leonidas Iza, head of CONAIE, chiding Lasso’s conservative government last Monday for “putting in place more and more policies of death, which don’t allow us to sustain our small economies.”

While Ecuador was gravely affected by the COVID-19 pandemic, its economic recovery package was smaller than most in the region. It’s been hampered in part by massive debts owed to the International Monetary Fund, or IMF, which for years has required the country to abide by strict austerity measures under leftist and conservative leaders alike.

In 2019, the Indigenous movement in Ecuador fought successfully against an economic austerity package, including the removal of fuel subsidies, that former President Lenín Moreno developed to comply with an IMF loan. Demonstrations over the course of 11 days resulted in the deaths of 11 protesters, and more than 1,000 were injured, for which the government was never held accountable.

In recent years, the quality of life for everyday Ecuadorians has deteriorated, and the cost of living has shot through the roof, particularly for the country’s 1.1 million Indigenous people. As of 2020, nearly three in five Indigenous Ecuadorians live in poverty, a level roughly double that of the general population.

Since the pandemic began, inflation has also increased, fuel prices have nearly doubled and over 65 percent of Ecuadorians remain unemployed or underemployed.

In response to the demonstrations, the Ecuadorian government declared a state of emergency in six provinces, allowing Lasso to deploy his armed forces and officers, equipped with anti-riot vehicles, tear gas and water cannons, against protesters. Since then, two protesters, one of whom had been struck in the head by a police tear gas canister, have been killed, and nearly 100 have been injured. Iza himself was also arbitrarily arrested and then released under public pressure.

Indigenous leaders have called for an end to the state of emergency and “demilitarization” as conditions for dialogue. However, Lasso’s government, which has accused CONAIE of attempting to foment a coup, has refused to end the order.

Well-known for its strategy of mobilizing public uprisings in favor of Indigenous land rights, environmental protection and socio-economic justice, CONAIE played an important role in protests leading to the ouster of three Ecuadorian presidents between 1997 and 2005.

“We cannot lift the state of exception because that would leave the capital defenseless,” said Minister Francisco Jimenez in an interview with Teleamazonas channel.

For now, Indigenous protesters and others have continued to defy government curfews and participate in direct action, as rising inflation, political dissatisfaction and growing momentum continue to fuel movements across the region.

“This is our show of strength until the government listens,” protester Manuel Cocha told AFP, as he and dozens of other demonstrators blocked a highway south of Quito last week.