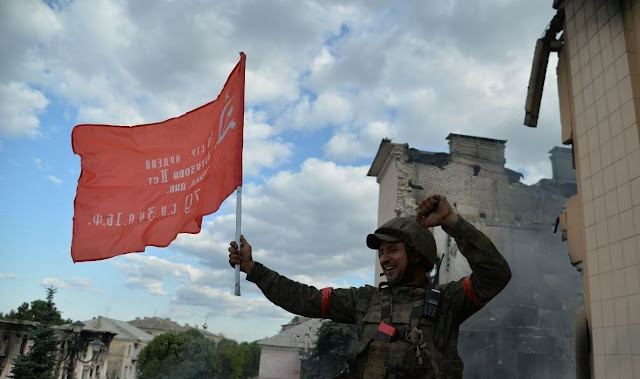 Today, the Severodonetsk-Lysichansk operation has finally reached its logical conclusion. Soldiers of the special police regiment named after Hero of Russia Akhmat-Khadzhi Kadyrov and the 6th Cossack regiment named after Matvey Platov hoisted the Banner of Victory near the administration building. The main question now is how many forces of the Armed Forces of Ukraine were able to retreat to Seversk under fire, and how many remained in Lisichansk. One thing is clear, that all who remain will either be destroyed or taken prisoner. The Ministry of Defense of the Russian Federation stated that three Ukrainian battalions lost more than 50% of their personnel in the areas of Verkhnekamenka and Zolotarevka over the past day. We are waiting for the start of the offensive on Seversk and Soledar.

⚔️ The situation on the fronts for the past day:

▫️ No significant changes were noted in the Kharkov and Slavyansk sectors of the front.

▫️On the Donetsk front today, our troops cleaned up Klinovoye. Artemovsk ahead. Four MLRS platoons were hit in the areas of Novoluganskoye, Zhelannoye, Berdychi and Vozdvizhenka, from which the Armed Forces of Ukraine fired at the settlements of the DPR.

▫️On the southern flank – in the Zaporozhye region in the village of Akimovka near Melitopol, Zelensky’s militants staged another terrorist attack – they fired at a freight train with food from a grenade launcher. 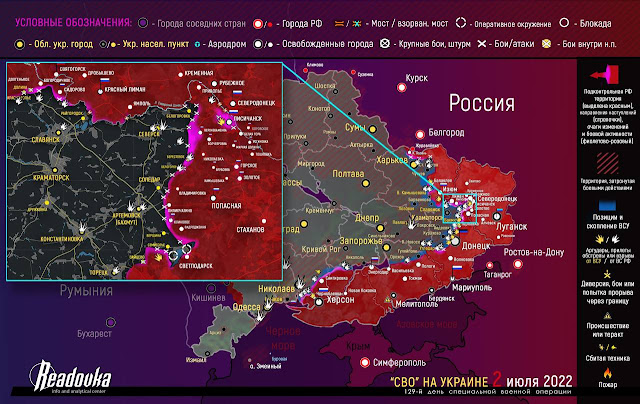 #YURI WAR BRIEFING A forecast of possible development after the fall of Lisichansk, and where would Russian forces hit. LPR territory is to be fully liberated either today or tomorrow, even though no confirmation of Belogorovka, the last LPR village still under control of the AFU, to be taken as of 19:00 CET. Most of Ukrainian soldiers could escape from Lisichansk, given a relatively low number of prisoners, but a several brigades’ worth of vehicles is lost to the Russians.

Residents of Lisichansk greet their liberators with genuine joy and flowers. And this is not surprising, because they have been waiting for this day for eight long years.

Soldiers of the special forces “Akhmat” and employees of the people’s militia of the LPR also do not hide their emotions. They thank us for our attention and support, which helped them take the city without any casualties among the personnel.

Once again I congratulate the residents of Lisichansk and all the participants of the NWO on the long-awaited victory! I wish you success, prosperity and a peaceful sky above your head!

What I noticed in Lisichansk is genuine joy and tears in the eyes of people, while driving around the city, people ran out to the side of the road and waved to our column. To be honest, I have not seen such a massive happy greeting in recent months.
The Ukrainian junta has already brought everyone to the handle. If at first people were afraid, wondering: what if Russia would leave, now, after a series of correct steps and a competent policy in the liberated territories, people have a clear understanding: if Russia has come somewhere, then it is here forever. No other way.

the brave prepared a bridgehead and defeated the main enemy forces located in Lisichansk, – write in the 4th brigade of the LPR

The fighters of the 4th brigade of the LPR remind of the role of the group 🅾️, which has done a great job in liberating Lisichansk:

“The movement began around the news that Lisichansk was liberated, yes it is, I will only say that the city was taken from different directions, different units… All the handsome guys, but for some reason no one talks about the brave ones who prepared a bridgehead and defeated the main enemy forces located in Lisichansk. Respect for men!”

It was the Uralians and the guys from the Volga region who hacked the defense of the APU to the south and west of Lisichansk, and the Siberians Siberians took the most important object – the Lisichansk refinery, which became the key to the city, and also cut the highway to Seversk, capturing Zolotarevka.

Tomorrow we will tell you more about it and show the footage.

Ukrops attempted to hit Belgorod, Russia — 6 missiles were intercepted in the sky. Some smoke rising from the airfield, unclear what it is

Ukrops managed to hit a civilian house in Belgorod, Russia

People are speculating that Ukrainians are using American HIMARS to hit Belgorod. The explosions look quite a bit different than the usual Ukrop weapons. Only 1 missile got through so far. They’re still firing

Explosions in #Belgorod, #Russia. A private home was damaged as a result of an alleged rocket strike #Ukraine #UkraineRussia #UkraineWar #UkraineRussiaWar pic.twitter.com/qVAk8V58e4

Governor Gladkov about explosions: “A series of loud sounds were heard in Belgorod. A private residential building on Mayakovsky Street, 23 is on fire. All operational emergency services are working on the spot.
There are two victims. They have already been taken to the hospital, all the necessary medical care is being provided. The reasons for the incident are being investigated, presumably, it could be due to the air defense system working.”

We Think the governor suggested a booster or an errand AD missile hit the houses, but that seems to be a stretch. Against, this is just the governor, not a military statement.