The situation in the Severodonetsk-Lisychansk direction as of 13.00 July 3, 2022.

Despite the report of the Minister of Defense of the Russian Federation to the Supreme Commander-in-Chief, the operation of cleaning up the Lisichansk Cauldron is far from being over.

Russian units reached the southern outskirts of Belogorovka and actually took control of the administrative borders of the Lugansk region/Luhansk People’s Republic. The main part of the APU units left Belogorovka. A similar departure is also observed from Grigorovka.

The road Belogorovka – Maloryazantsevo – Lisichansky – Lisichansk was taken under control. The battles in Belaya Gora are over. But there are still pockets of resistance both in the city itself and in the fields.

Yes, by the end of next week Lisichansk will be crowded with military correspondents and humanitarian workers. Yes, Lisichansk really fell. But so far the situation has not stabilized enough to repaint this entire territory in our red color. @rybar 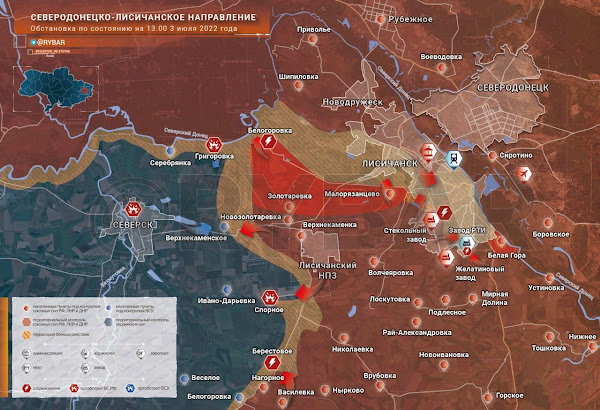 The main statements of the People’s Militia of the LPR in connection with the liberation of the territory of the republic:

- The exit of the LPR troops to the administrative borders does not guarantee the security of the republic because of the forces and means that the Armed Forces of Ukraine have;

- The forces of the LPR should help push the Ukrainian army out of the territory of the DPR;

- The security of the LPR will be ensured if the Ukrainian army is moved away from the borders of the republic at a distance of about 300 km.

The situation in the Lisichansk direction by the end of July, 3 according to @rybar. Joint forces have taken the LPR border under control. In South part of Lisichansk and in the felds near town there continues the process of liqudation of disparate APU groups. 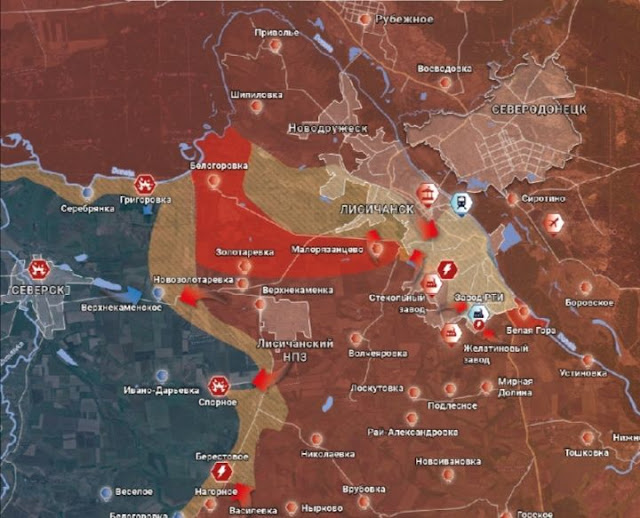 Obviously, in revenge for the loss of Lisichansk, the last stronghold in the Luhansk region, the Armed Forces of Ukraine this early morning brought down “Tochka U” on the peaceful sleeping Belgorod. Our air defense shot down all the missiles, but one of them, having fallen, detonated. As a result, four people died, four people were injured, and a total of more than 65 houses, both private and multi-apartment, were damaged. Among the dead, three are refugees from the Kharkov region. According to some reports, two more people are missing. Those who today committed a real act of terrorism against Belgorod residents traditionally declared with wild cynicism that “Rusnya shelled itself.”

⚔️Let’s move on to the situation on the fronts:

▫️Lugansk Front
So, from now on, July 3 is a historic day for Luhansk citizens. Today, the last settlements that held the APU here were occupied by ours, the last of them is Belogorovka. Defense Minister Shoigu reported to the President on the complete liberation of the Luhansk People’s Republic from Ukrainian armed forces, and a little later, the head of the Republic, Pasechnik, solemnly addressed his fellow citizens with happy news – after eight years of struggle, they are free! We do not yet know whether the region will become part of the Russian Federation as a region or as a republic, but one thing is for sure – the Lugansk region is free, the Lugansk Front is going down in history.

▫️Donetsk Front
There is an attack on Seversk. According to reports, Serebryanka, Grigorovka are already occupied, there is also information about successful battles for Dronovka. The representative of the Ministry of Internal Affairs of the LPR announced the battles for Seversk itself. The battle for the Seversk-Soledar-Artemovsk line begins . 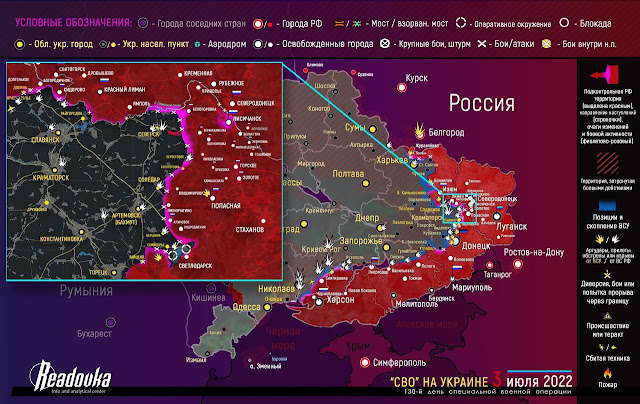 We are advancing on Seversk.

According to some reports, Serebryanka, Grigorovka are already occupied, there is also information about successful battles for Dronovka.

The representative of the Ministry of Internal Affairs of the LPR reported the iniciation of the battles for Seversk. The battle for the Seversk-Soledar-Artemovsk line begins.

Seversk is the most important key location right now where the receded AFU have gathered preparing to counter attack.

More from Lisichansk. Includes crossing of the Seversky Donetsk river.