‘Mitch is a loser’: Trump hits back at McConnell over Ye, Fuentes dinner 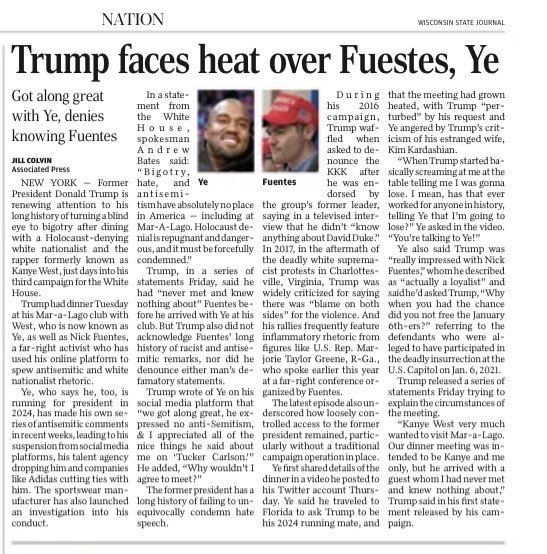 The story in AP, written by the untalented and very unreliable Jill Colvin, who I unfortunately got to know at the White House, is Fake News. We have very strong security, especially with the extremely talented Secret Service Agents on premises, but when I know someone, as I did Ye, we’re not going to have my guests strip searched, thrown against walls, and otherwise physically beaten. The anonymous sources don’t exist. Stories to the contrary are FAKE NEWS!

Despite producing tens of thousands of JOBS and such important and lasting structures in New York City, it is said that I will never be able to get a fair trial there. Well, we will soon see, because this case against two companies is a disgrace that should never have been brought, and has been totally DISPROVEN. Even prosecutors quit the D.A.s Office because they thought it was so unfair. Such a case has never even been brought! before. Justice in America!!!

Mother’s and families of victims of Violent Crime, which is breaking all Records in NYC, are furious that the criminals who killed their loved ones haven’t been given a trial in many years, while millions of dollars, & years of work, has been spent on a ridiculous Fringe Benefits Case, the likes of which has never been prosecuted before in our County’s history. It is a continuation of the greatest Witch Hunt of all time. The D.A.s Office should focus on Murders & Violent Crime, not “Bullshit!”

The Manhattan D.A.’s Office has not tried a Murder Case since 2015, despite the fact that Violent Crime in NYC is at an all time high. That’s 6 years ago and yet, after years of investigation, millions of dollars spent, and the costly and laborious inspection of almost 10,000,000 pages of documents, we are in the second week of a “Fringe Benefits” Case over an Executive’s use of a company car, a company apartment, and his grandchildren’s education. No such case has ever been tried before. Sad!

RINO Karl Rove is a Fox News loser, a pompous fool with bad political instincts. In other words, he loses a lot. Only good at taking peoples money, and wasting it. I was 12 and 0 against him in Senate Endorsements, not something I’m proud of, but something people, especially candidates, should know!….Also 12-0 in Senate Endorsements against the Broken Old Crow, Mitch McConnell, who has, by the way, a 6 % Approval Rating – Not exactly great news for the Republican Party!

At a press briefing, Gov. Ron DeSantis (R-FL) bemoaned the absence of a national “red wave” after being asked about former President Trump.