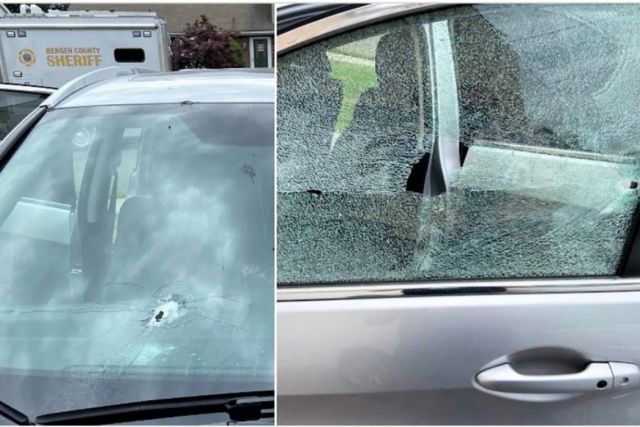 Someone fired several shots into two vehicles in Saddle Brook early Saturday, said police who sought the public’s help finding whomever was responsible.

Residents on Hutter Street thought they’d heard fireworks when three holes were fired into one vehicle and two into another, Police Chief Robert Kugler said.

Anyone who may have witnessed the shootings or has home surveillance video or other information that can help identify those responsible is asked to contact Saddle Brook police: (201) 843-7000.

This perfectly fits the pattern of the “Law Enforcement Sensitive – For Official Use Only” information revealed on the Hal Turner Show last week, which warned that ANTIFA and Black Lives Matter were grabbing up truckloads of professional Grade fireworks and setting them off in WHITE neighborhoods, to acclimate residents to sounds that mimic gunfire.  That original Intelligence warning was revealed a week ago on this web site while no other media outlet reported it (HERE)

The Law Enforcement Intelligence bulletin then warned that these groups are planning to launch actual GUN ATTACKS in middle class, (White) neighborhoods on the 3rd and Fourth of July, to kill people under cover of what sounds like fireworks.

Clearly, that effort is well on its way to reality.

Saddle Brook, New Jersey is a middle class, mostly white, suburb.  This shooting seems to prove the ANTIFA and BLM attack plans are coming to fruition.

Americans are URGED to be extremely vigilant this Fourth of July holiday.  Be aware of your surroundings and what is ACTUALLY taking place.  Be prepared to defend yourself, your family, and your property, in the event they come under armed attack by these Communist insurgents.