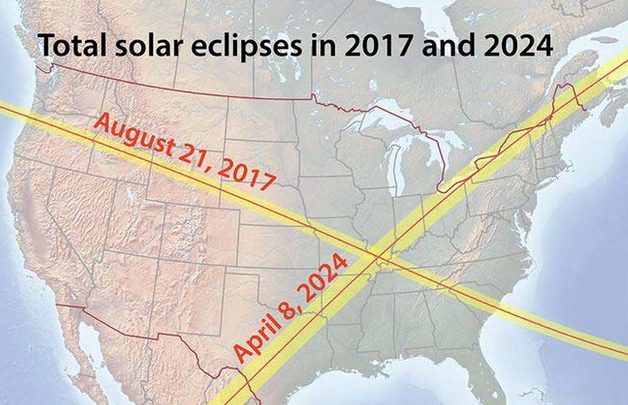 23 How is the hammer of the whole earth cut asunder and broken! how is Babylon become a desolation among the nations!

24I have laid a snare for thee, and thou art also taken, O Babylon, and thou wast not aware: thou art found, and also caught, because thou hast striven against the Lord.

25 The Lord hath opened his armoury, and hath brought forth the weapons of his indignation: for this is the work of the Lord God of hosts in the land of the Chaldeans.

The SNARE was laid some time ago, and when the time comes, America will fall, first inward, then the outside attacks will come. It appears that Babylon falls in ONE HOUR in the Book of Revelation, and in Revelation the term ONE HOUR appears to be 3.5 Years. Look it up for yourselves if you do not believe it. Thus, the FALL of Babylon America will most likely take 3.5 years – which is interesting when compared with the solar eclipse that occurred on August 21, 2017 and another will occur on April 8, 2024. Please note that 8-4-2024 adds up to 20 which in the Bible means REDEMPTION. It also appears to be pointing to the date 4-11 as well.

The days between the two eclipses that appears to terminate America-Babylon are 2421 excluding both start date and end date or 2423 days inclusive. The mid-point is 1211 days which falls on December 14th, 2020. The date was a momentous date for a number of reasons, and points to bad omens for the latter 1211 days, as we shall see.

This upcoming one added to the last one, paints an X over America, which appears to mean TERMINATION. It is more than interesting that these two eclipses are 7 years apart, pointing to Daniel’s 70th week, a period of intense trouble coming upon the world.

The Lord uses many different SIGNS to WARN of impending events, not wanting ANY to perish, but that ALL come to a Biblical REPENTANCE.  So what happened at the EXACT MID-POINT of these eclipses on December 14th, 2020? Steve Fletcher gave us a list that proves 12-14-2020 was a very important MARKER DATE. It also has an embedded 4-11!!

12-14-2020 also has a 4-11 embedded within it and it adds up to 12, a number that means governmental perfection. It is obvious that what Steve Fletcher pointed out is of vital importance to the Church. If we watch, the number 4-11 is appearing to many people.

“Each time it is mentioned (only FOUR times), the thought of slavery is revealed. In the Old Testament the people are enslaved by their own UNBELIEF; by their KING and by a NATION. In the New Testament we find a man ENSLAVED BY DISEASE.”

Notice it says by THEIR OWN KING and their OWN NATION. America appears to be under Martial Law already, and will soon see MILITARY RULE and the suspension of all constitutional rights brought about by Trump and Biden along with the U.S. Military.

People are enslaved by their OWN UNBELIEF, and by FEAR.  America is a nation that rejected God, His Son and refuses to believe the Bible. Even God’s OWN PEOPLE are full of unbelief. Is CV-19 a disease? Of course, it is. Because of FEAR and PANIC Americans and the WORLD are being enslaved. Instead of standing upon the WORD OF GOD and refusing to bow down to the world of antichrist leaders of Psalm Two, they go under the harsh yoke of tyranny.

December 14th is also A SEVEN DAY WARNING to December 21st, the Winter Solstice. On the 21st of December, the Winter Solstice, was the GREAT CONJUNCTION of Jupiter and Saturn, representing the last and final battle between Christ and Satan for Earth’s rulership. We are now moving rapidly into the final 3.5 years of trouble in America. Are you awake yet? None of this coincidental, and all of it is a direct warning from the Lord.

January 20th, 2021 IS MOST LIKELY A SNARE, A TRAP and it may well be the start of the fall of America/Babylon. Many have high hopes that Trump will somehow pull a rabbit out of the hat, and he well might. But even if he does, it is a TRAP, a sucker punch, a deception, a delusion, for the timeline of the Lord, given to us in the HEAVENS shows us America is going down in ONE HOUR OF TIME.

I find it more than coincidental that from 12-14-2020, a day full of ominous signs if one knows how to read them, to January 20th, 2021 is 38 days and 38 means SLAVERY. I believe we are being shown that Babylon is FALLEN, and her Constitution and Bill of Rights are OVER on January 20th, and America-Babylon begins her final judgments because there is no REPENTANCE IN THE LAND and Americans end up in total slavery.

Not only is there no repentance in the land, the Church is SO APOSTATE they do not even know what the word means so it is UNABLE to repent a Biblical repentance!

And remember that 44 is Obama’s number or 4×11 = 44. Why is that? Are we being told something? Trump was a wild card, number 45. The number 45 means preservation! Trump gave the Church a four-year delay to see if they would repent. They did not, in fact not a hint of repentance.  The number 4 means WORLD, and the number 5 means GRACE. At the LAST TRUMP? Is all of this code for a global event called SUDDEN DESTRUCTION?  Does that mean Obama will be revealed for who he really is on or around those dates? Perhaps he is revealed on 4-4-2021 and this is the 7-day warning for the Church?

Remember that the Lord told us that as it was in the days of Noah, so shall it be? Noah was given a SEVEN DAY WARNING and then was LIFTED UP and OVER the chaos of destruction below.  The Lord told us to watch the SIGNS. The date 4-11 could mean the Church will be lifted up and removed just before the flood of Antichrist comes with a vengeance. Are we watching or mocking?

What is so important about 4-11? That is the very date that the Lord gave the world a momentous SIGN in the heavens when TWO COMETS crossed over the HEAD OF SATAN, once in 1996 and then again in 1997 forming a CROSS IN THE HEAVENS pointing to the FINISHED WORK OF CHRIST and crushing the head of Satan. It was not coincidental; it was a HUGE SIGN FOR THE CHURCH.

Is 4-11-2021 the day that THE CHURCH AGE IS OVER? That GRACE is closed, and that the STRAIT GATE and NARROW WAY to heaven is closed FOREVER, and that from that date onward BEHEADING OF CHRISTIANS is the only way TO HEAVEN?

America/Babylon has been giving the finger to the Lord for years and years, has murdered untold millions of babies, is responsible for CV-19 (don’t let them fool you), that leads directly to the MARK OF THE BEAST and according to the Bible is responsible for havoc all over the world via the CIA and NSA. It is the MERCHANTS OF BABYLON that cast a magic spell over the WHOLE EARTH, and that spell is pharmaceutical in nature. CV-19 with its testing, masking, social distancing, tracking and vaccinations are leading to a PHARMACEUTICAL TYRANNY with the end result the destruction of humanity?

Is it also coincidental that from 1-20-2021 to 4-8-2021 is 77 days exclusive of the beginning and the end date, with the number SEVEN meaning COMPLETE? A fellow long ago said the Lord kept showing him 7-11 over and over again but he did not know why. Perhaps we do now. BEWARE, you are about to go under a tyranny unlike anything ever seen on Earth.

So, there you have it, like a Ripley’s Believe It Or Not. Buckle Up, the road ahead is going to be very bumpy. If you have not left the Matrix yet, if you have not entered the STRAIT GATE or walked the NARROW WAY, please do for the AGE OF GRACE may be closing sooner than you think!!