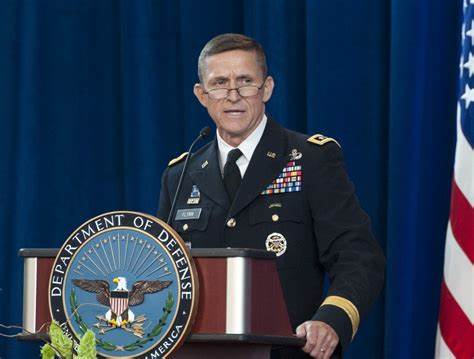 Michael Thomas Flynn is a retired United States Army lieutenant general and conspiracy theorist who was the 25th United States National Security Advisor for the first 22 days of the Trump administration until his resignation.

Flynn’s military career included a key role in shaping U.S. counterterrorism strategy and dismantling insurgent networks in the Afghanistan and Iraq Wars, and he was given numerous combat arms, conventional, and special operations senior intelligence assignments. He became the 18th Director of the Defense Intelligence Agency in July 2012 until his forced retirement from the military in August 2014.

During his tenure he gave a lecture on leadership at the Moscow headquarters of the Russian military intelligence directorate GRU, the first American official to be admitted entry to the headquarters. Wikipedia