The battle for Planet Earth is reaching an inflection point.  We can report from high-level sources the Khazarian Mafia has reached out and is trying to negotiate a transfer of power (see further down for details).

However, sources ranging from the CIA, MI6, Asian secret societies, the FSB, the Pentagon, etc. all agree it is time to stop reacting and start acting.  We need to keep up the attack on all fronts until we actually see a surrender followed by a multi-trillion-dollar campaign to fix the planet.

We have heard this surrender talk before and it always turns out to be a way to buy time until some horrible new incident takes place.  For example, the Cabal has been repeatedly threatening recently to blow up the Three Gorges Dam in China.  This would devastate the 350 million people living downstream. https://www.quora.com/What-would-the-effects-be-if-the-Three-Gorges-Dam-were-to-collapse

It would also result in retaliation in the form of blowing up the Island of La Palma and hitting the U.S. East Coast with a 600 mile per hour 100-meter tsunami, wiping out Florida etc. https://websites.pmc.ucsc.edu/~ward/papers/La_Palma_grl.pdf 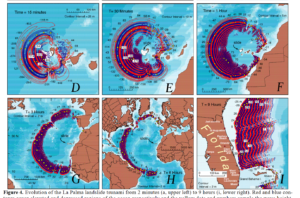 That is why reaching a win-win solution is a much better option than mutually assured destruction would be.

Nonetheless, we know the Khazarian Mafia plans events decades, if not longer, in advance.  This means now that their plandemic fear campaign is losing steam, they have something else planned.

On this front, we took note of the Turkish TV broadcast about why the Evergreen ship Ever Given blocked the Suez Canal at the same time as an Evergreen truck blocked China’s main highway.  They claim it was to stop a major and long-planned “global warming,” environmental disaster event.  This rings true and we hope the TV broadcast is right and the planned disaster has been stopped.  https://www.dailymotion.com/video/x80l09q

There is also more and more evidence of UFOs and aliens being put out on the corporate propaganda media.https://www.veteranstoday.com/2021/04/18/stunning-pentagon-releases-slam-dunk-ufo-video-admits-withholding-far-more-compelling-images/

This may well mean their “invasion by little green men,” campaign, which they have been working on at least since the 1930’s, may soon be brought to a “news” screen near you.  Keep an eye in the sky for holograms too.

The rollout of these campaigns is actually a sign of Khazarian Mafia desperation.  Remember how the Romanian dictator Ceausescu kept ramping up oppression until he ended up before a firing squad?  The same thing appears to be happening in Canada now.  When Ontario Premier Doug Ford called last week for a totalitarian lockdown, using the fake pandemic as an excuse, 39 out of 45 Ontario police stations refused to go along. https://thepostmillennial.com/ontario-government-backpedals-on-extraordinary-police-powers-that-would-have-allowed-police-to-randomly-stop-and-question-people-for-being-outdoors

It should not be long now before the fratricidal Manchurian candidate Justin Castro and his Khazarian Mafia lackeys face their own equivalent of a firing squad.

In the U.S., meanwhile, the coup d’etat that removed democratically elected President Donald Trump is imploding.  Our CIA sources confirm that Joint Chiefs of Staff Mark Milley has been overthrown and Marine Corps Gen. David Berger has assumed command of the Joint Chiefs of Staff.  The new command needs to coordinate with their Canadian counterparts to liberate North America.  The shared principles of Democracy, rule of law, division of powers, and meritocracy should be the glue that unites the soon-to-be-born United States of North America.  https://realrawnews.com/2021/04/biden-denied-entry-to-pentagon/

We are also now finding out the coup in the U.S. was carried out by members of the same team that helped collapse the Soviet Union and they used similar methods: combining bribery and murder, the CIA sources say.  In particular, the Rockefeller crime family and their Fortune 500 lackeys offered $12 trillion in bribes to…