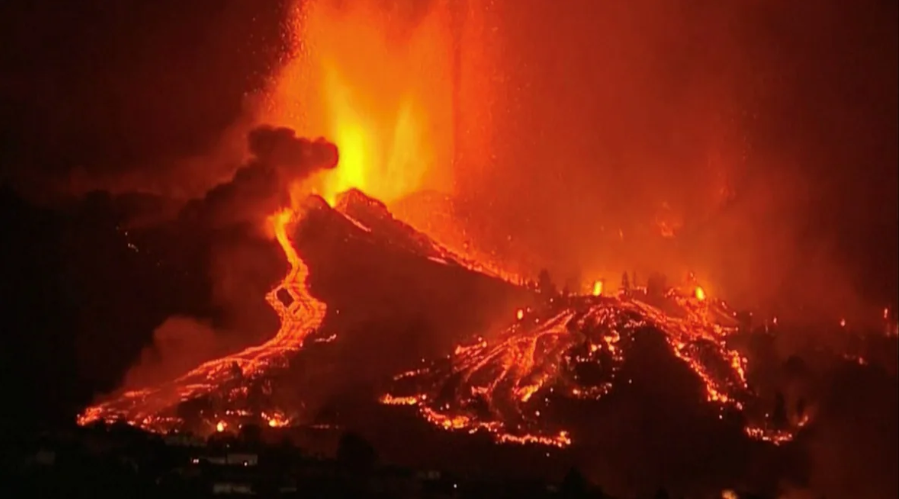 IS THE LA PALMA VOLCANO JUST WARMING UP FOR THE BIG ONE?

An eruption of the volcano that could trigger a massive land slide and resulting tsunami has now erupted but it is not large at this time. Pictures coming in show a small eruption but a large rift in the area of importance is developing in the danger zone.

La Palma is NOW erupting! The eruption began minutes ago.

So far it appears to be a minor eruption but could well be precursor to a much larger event. What has me wondering about all of this is the many visions of a massive tsunami hitting the USA coastal regions and the numbers/dates involved seem to indicate this is just the beginning.

It is very possible that this entire episode, which began on 9-11 and the twin towers take-down was an inside job, engineered by the global deep state to start the process of setting up a police state, laying the groundwork with Homeland Security, the NDAA laws, FEMA Camps and all the rest in preparation for the final MARK OF THE BEAST, via our treasonous medical establishment.

Reports are coming in claiming “Eruption in Progress” on the Island of LaPalma.

And all those people who thought they were smarter than everyone else or that nothing would happen, are ALL trying to flee . . . at the same time.   WHAM. Traffic jam.  Now none of them can get out.

From Geologists and Volcanologists:

The geometry of this fault system and the timing of its formation in relation to episodes of vent opening during the eruption indicate that it is not the surface expression of a dyke. Instead, it is interpreted as being the first surface rupture along a developing zone of deformation and seaward movement within the western flank of the Cumbre Vieja: the volcano is therefore considered to be at an incipient stage of flank instability. Climatic factors or strain weakening along the Cumbre Nueva collapse structure may account for the recent development of this instability.

Some news agencies have reported that today’s eruption took many, including scientists, “off guard” as they were NOT expecting an eruption this early – after only a week of swarm activity, but subscribers to this Earthquake Alert e-list knew to be watching. I repeatedly warned that an eruption was imminent, and now it has begun. “Begun” is the correct term to use because we haven’t yet seen the full scale dynamics of this eruption.

What we know so far is that the eruption began a little over four and a half hours ago when a vent opened up on the west flank of the volcano and a fissure sent a column of black smoke and volcanic ash skyward. This is precisely where I said to be watching for a fissure to open up.

So far, a total of four vents have opened up. (NOW 7) The ash plume has reached approximately 5,000 ft. in height and is moving to the southwest at 15 knots. Multiple lava fountains are occurring at these vents. Volcanic cones are quickly forming around these lava fountains.

Wildfires have broken out, devouring forest and croplands. Lava flows are moving toward the west (toward the coast) and have now completely destroyed several buildings and homes along the way. Some roads are now blocked by lava flows and impassible. Mandatory evacuations are on-going on the island.

Seismic activity continues to increase. While the initial eruption has been so far been relatively small, this does not negate the possibility of a large blow-out eruption. That is still a very real possibility, so I continue to monitor the situation.

See video footage of the eruption.

Overall I’d say that, so far, this eruption reminds me a lot of the Kilauea, Hawaii eruption of 2018 (which I also predicted with precision accuracy).

This eruption may go on for days, weeks, or months with times of surging lava flows followed by lulls in activity or resurgence. Time will tell. You can monitor updates on this and other volcanoes through Volcano Discovery.

Latest report is that there are now 7 fissures that are now ejecting lava as the intensity increases. BEWARE IT COULD BLOW IN A HUGE ERUPTION ANYTIME.

This eruption appears to be intensifying as time goes by, and the magma outflow now increasing rapidly but as yet no major slide offs or terrific explosions.

From September 11 (a warning sign) to the actual eruption was 9 days inclusive and 7 days in between. Both of those number mean COMPLETENESS. I would not be surprised as we move into the next few days – with the 22nd being the equinox. The 21st might be day to watch as it will be the last full day of summer with a full HARVEST MOON during Israel’s celebration of their year 5782 which means TO AWAKEN. This is a shmita year, and that usually brings with it major changes is many areas of life.

Jesus makes an interesting comment concerning the equinox as it is the only time when there are exactly 12 hours in a day and 12 hours of darkness in John 11:9-15 – notice the 9-11 remark:

9 Jesus answered, “Are there not twelve hours in the day? If any man walk in the day he stumbleth not, because he seeth the light of this world.

10 But if a man walk in the night, he stumbleth because there is no light in him.”

11 These things said He, and after that He said unto them, “Our friend Lazarus sleepeth; but I go, that I may awaken him out of sleep.” (Shimta Year 5782 in Strong’s means TO AWAKEN)

12 Then said His disciples, “Lord, if he sleep he shall do well.”

13 However Jesus spoke of his death, but they thought that He had spoken of the taking of rest in sleep.

14 Then Jesus said unto them plainly, “Lazarus is dead.

15 And I am glad for your sakes that I was not there, to the intent that ye may believe. Nevertheless let us go unto him.”

Is Jesus telling us that the resurrection will occur in an equinox? We are coming up on something interesting as many claim the Lord is using the Lord’s calendar which they claim is the ENOCH calendar, If so TODAY is the beginning of the FEAST OF TRUMPETS, and the 20th would be the DAY OF THE LAST TRUMP!! So who knows, but it is interesting. It is a STAY AWAKE TIME as we are so close to entering the Hour of Trial that is to TRY THEM THAT DWELL UPON THE WHOLE EARTH.

Are you ready to escape this “hour of temptation”?

At fourscore+ years of age his force does not seem to have abated one bit, still producing prolifically with his team at the LightGate ministry in Wisconsin. He was a professional aviator for many years, flying the latest corporate jets as Captain, and he also served in the military.