In the Book of Genesis we are told that the real timing of God’s APPOINTED FEASTS IS regulated by the Sun, Moon and Stars:

14 And God said, Let there be lights in the firmament of the heaven to divide the day from the night; and let them be for signs, and for seasons, and for days, and years:

God tells us that the SUN, MOON and STARS are for SIGNS. The world for SIGNS:

This would be connected to eclipses, blood moons, tetrads, ring of fire eclipses, etc. They are A SIGNAL, an OMEN, and also EVIDENCE.

Now the word SEASON is interesting:

From H3259; properly an appointment, that is, a fixed time or season; specifically a festival; conventionally a year; by implication, an assembly (as convened for a definite purpose); technically the congregation; by extension, the place of meeting; also a signal (as appointed beforehand): – appointed (sign, time), (place of, solemn) assembly, congregation, (set, solemn) feast, (appointed, due) season, solemn (-ity), synagogue, (set) time (appointed).

The Lord is plainly telling us that it is THE COSMIC CLOCK that He is using for His APPOINTED FEAST DAYS!! That means that any calendar on Earth MAY or MAY NOT be synchronized to the COSMIC CALENDAR.  That means that the Hebrew, Enoch and other calendars often presented may not be accurate at all, and the Book of Enoch says we are OFF on our dating systems, especially on the APPOINTED FEAST DAYS OF THE LORD.

We know, for example, that Israel pays little attention to any of this and does not follow even the simplest of rules on their civic calendar, and simply says that, for example, the FEAST OF TRUMPETS is this date. What if the moon is not sighted on their appointed date? It matters not, Feast of Trumpets is when WE say it is, the moon sighting matters not. Once you begin to DRIFT from the Lord’s Word, you get further and further from the actual appointments of the Lord and this then frustrates all attempts to find any “rapture” date if one connects them, for example, to the Feast of Trumpets.

“We are not in Cheshvan (month of the FLOOD)

Trumpets could not have occurred in September because on the full moon of September 20, the Sun was still in the Northern hemisphere. The turn had not yet taken place.

The next full moon was October 20. By October 20, the Sun had turned from the Northern hemisphere to the Southern Hemisphere. And we will celebrate Trumpets around Nov 4 at the sighting of the New Moon. We celebrate Tabernacles 15 days later.

The last day of Tabernacles is around Nov. 25, the day we celebrate Thanksgiving.

We are not yet in the second month. We haven’t even started the first month.

Determining the correct Calendar is easy, if one follows scripture.

The problem of course is that scripture is often not heeded.

Exodus 34:22 clearly tells us to celebrate the feast of ingathering at the turn of the year.“

—And thou shalt observe the feast of weeks, of the first-fruits of wheat-harvest, and the feast of ingathering at the turn of the year.

Thou shalt keep the feast of weeks with the firstfruits of the corn of thy wheat harvest, and the feast when the time of the year returneth that all things are laid in.

“Keep the Harvest Festival when you begin to harvest the first crop of your wheat, and keep the Festival of Shelters in the autumn when you gather your fruit.

And you yourself will observe the Feast of Weeks—the firstfruits of the wheat harvest—and the Feast of Harvest Gathering at the turn of the year.

“What is the feast of ingathering?

The Bible refers to ḥag ha-asif (“Feast of the Ingathering,” Exodus 23:16), when grains and fruits were gathered at the harvest’s end, and to ḥag ha-sukkot (“Feast of Booths,” Leviticus 23:34)”

What are the three major feasts of Israel

The Three Pilgrimage Festivals, in Hebrew Shalosh Regalim (שלוש רגלים), are three major festivals in Judaism—Pesach (Passover), Shavuot (Weeks or Pentecost), and Sukkot (Tabernacles, Tents or Booths)—when the ancient Israelites living in the Kingdom of Judah would make a pilgrimage to the Temple in Jerusalem

“What exactly is the turn of the year? 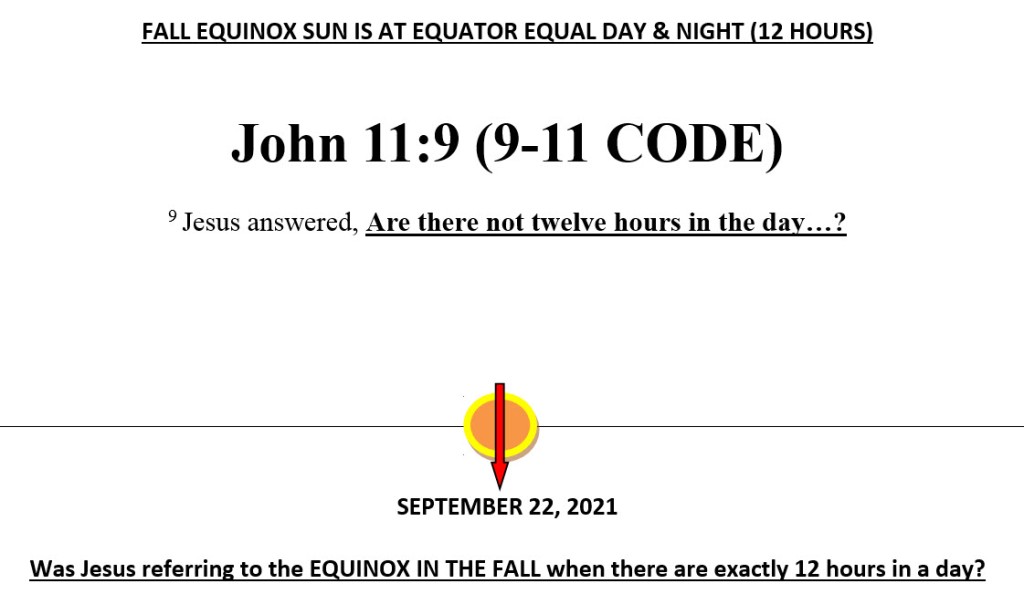 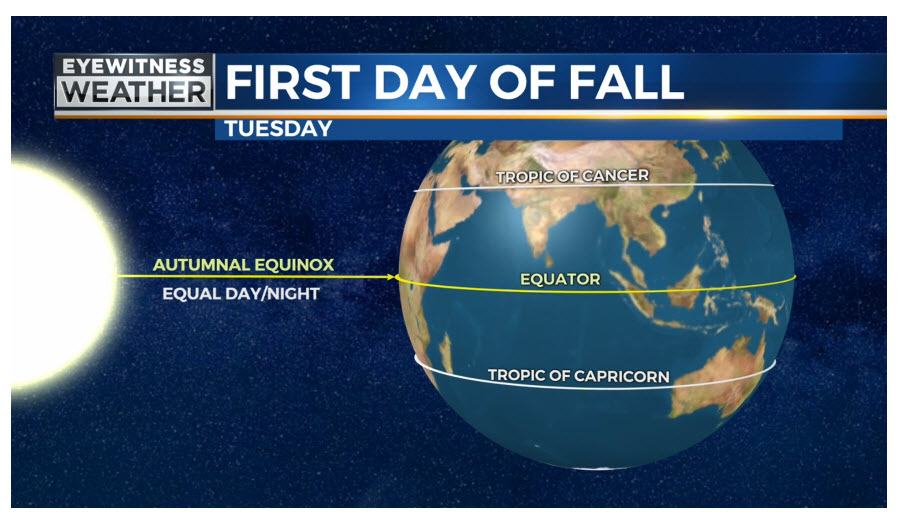 This would mean, for an American example, Thanksgiving to Thanksgiving, as it is based upon THE HARVEST IS IN. The harvest is about the HARVEST OF SOULS as in Revelation:

14 And I looked, and behold a white cloud, and upon the cloud one sat like unto the Son of man, having on his head a golden crown, and in his hand a sharp sickle.

15 And another angel came out of the temple, crying with a loud voice to him that sat on the cloud, Thrust in thy sickle, and reap: for the time is come for thee to reap; for the harvest of the earth is ripe.

16 And he that sat on the cloud thrust in his sickle on the earth; and the earth was reaped.

Maybe we will appear before the Lord this year on Tabernacles.

I personally am baffled as to why people seem to disregard Exodus 34:22. It is not difficult to determine when the sun crosses or turns from one hemisphere to the other hemisphere.

Determining the correct calendar is easy if one follows Scripture. We don’t follow the Enoch calendar, the Torah calendar, the Hebrew calendar or any other calendar. We follow Scripture. Scripture tells us to celebrate Ingathering at the turn of the year.

The 7th month will not start until the new moon on November 4. Tabernacles won’t occur until 15 days later.”

REMEMBER THE NEW MOON IS NO MOON AT ALL, ZERO LIGHT, DARK NIGHT, A NIGHT A THIEF WOULD STRIKE. NOTICE THIS NEW MOON IS ON 11-4 OR A 4-11 IN REVERSE. Now here is something interesting indeed as it relates to the 4-11 mystery number or possible date.

FROM SEPTEMBER 22 EQUINOX to NOVEMBER 4TH is 44 days inclusive another 4-11!! Coincidence? 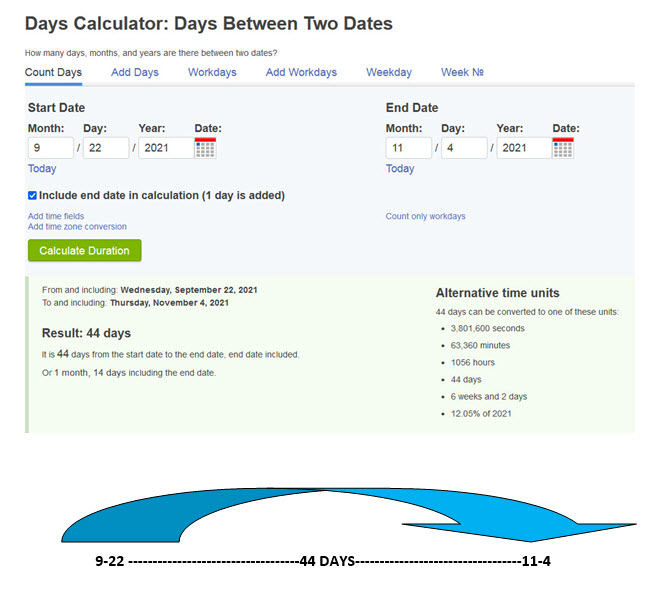 Remember what 411 means in Strong’s?

I find it odd that Genesis 1:14 (4-11) points to the heavens as the Lord’s clock and then verified by the two huge and beautiful comets that passed over Satan’s Head in the heavens with the first one in1996 on 4-11-1996 and then the second one in 1997 on 4-11 exactly a year apart. Why was that, one might ask? Could the Lord be pointing back to Genesis 1:14 to remind us of what we are all seeing right now? 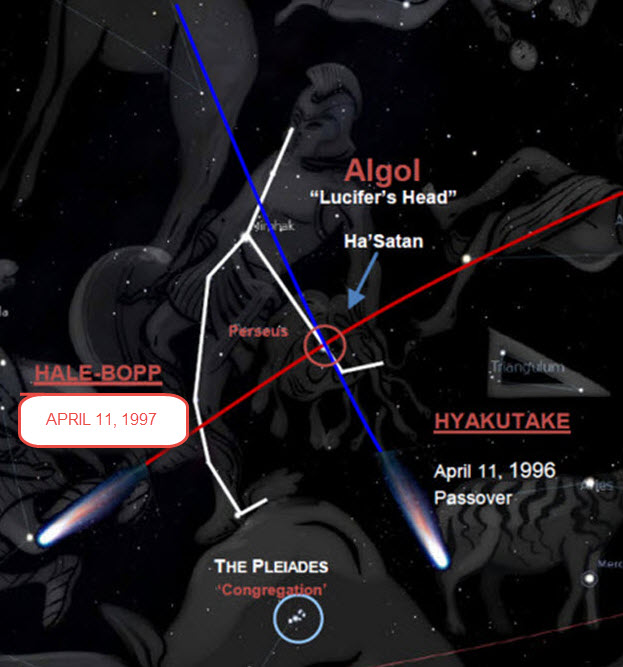 Does not God use a fishhook to catch men? The truly saved are to be “fishers of men”, and remember Peter went “fishing” to escape being identified with Jesus! FISHING FOR MEN to bring them to true salvation is what this is all about. And when one enters the STRAIT GATE and WALKS THE NARROW UNTO “LIFE” who is JESUS CHRIST, then 411 or 4×11 is an indescribable  event for the there are no human words to describe Jesus Christ and His DIVINE AGAPE LOVE!! That is why they made up the name “agape” for God’s LOVE TYPE, as found in Vine’s Dictionary!!

12 And at that time shall Michael stand up, the great prince which standeth for the children of thy people: and there shall be a time of trouble, such as never was since there was a nation even to that same time: and at that time thy people shall be delivered, every one that shall be found written in the book.

2 And many of them that sleep in the dust of the earth shall awake, some to everlasting life, and some to shame and everlasting contempt.

3 And they that be wise shall shine as the brightness of the firmament; and they that turn many to righteousness as the stars for ever and ever.

10 And I saw another mighty angel come down from heaven, clothed with a cloud: and a rainbow was upon his head, and his face was as it were the sun, and his feet as pillars of fire:

2 And he had in his hand a little book open: and he set his right foot upon the sea, and his left foot on the earth,

3 And cried with a loud voice, as when a lion roareth: and when he had cried, seven thunders uttered their voices.

5 And the angel which I saw stand upon the sea and upon the earth lifted up his hand to heaven,

7 But in the days of the voice of the seventh angel, when he shall begin to sound, the mystery of God should be finished, as he hath declared to his servants the prophets.

So here we have two references of the END OF DAYS and Daniel’s 70th week beginning. When Michael stands up, it says there SHALL BE (future tense) a TIME OF TROUBLE as never seen before. In Revelation it says when HE STANDS UP, there shall be DELAY NO LONGER and the mystery of God shall be FINISHED. The Church is a MYSTERY. The Rapture of the Church is a MYSTERY. Salvation is a MYSTERY. I believe that the little book in Michael’s hand IS THE CHURCH and the MYSTERY OF THE CHURCH AGE will close.

Someone pointed out that the LAVA FLOWS on La Palma appear to be the FOOTPRINTS OF MICHAEL as one in the SEA and the other on THE LAND. Spiritual eyes have no problem seeing this as yet ANOTHER PROOF of MICHAEL’S CONNECTION TO LA PALMA.

La Palma is one of SEVEN ISLANDS that make up the Canary Islands. Actually there are 8 islands, but one is very small and is often not counted. The activity on La Palma is severe and increasing. The ROAR sounds like the ROAR of this volcano sounds like Michael’s ROAR!!

Is it not also interesting that our warning phrase for miners is “the canary in the coal mine?”

“Canary in the coal mine. Meaning. Someone/something that is an early warning of danger.”

Where does the expression a canary in a coal mine come from?

An allusion to caged canaries (birds) that miners would carry down into the mine tunnels with them. If dangerous gases such as carbon monoxide collected in the mine, the gases would kill the canary before killing the miners, thus providing a warning to exit the tunnels immediately. (To escape)

You might want to ponder why Michael STANDING UP with one foot on the SEA and the other on THE LAND is a CANARY WARNING OF TROUBLE COMING, and the use of the term “Canary in the coal mine” also means WARNING OF DANGER. Or are you a mocker? Are YOU READY OR NOT?

Why is the arrow 11.4 missing on this cover of this 2015 Illuminati missing? Do they know something we do not? 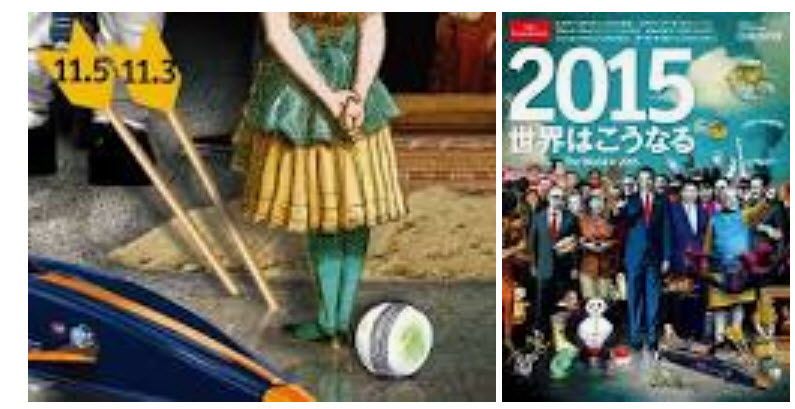