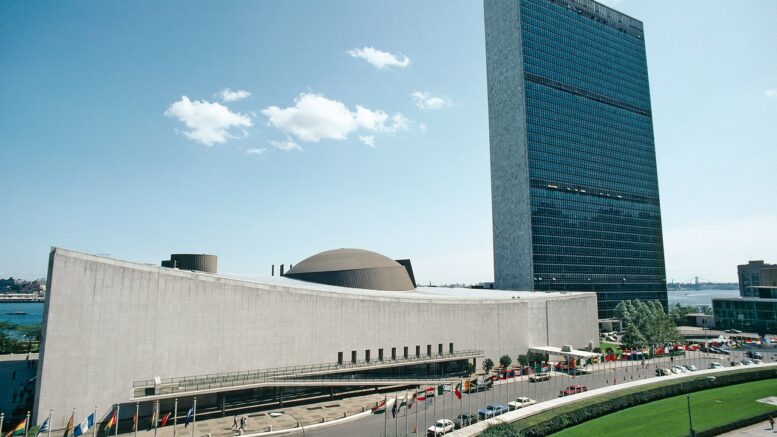 POSTED BY: THE PLANETARY ASSOCIATION FOR CLEAN ENERGY, INC.SEPTEMBER 21, 2020

An official UN-Affiliated NGO has definitively walloped the United Nations over mandated vaccine policies that are sweeping the world, exposing massive UN hypocrisy in following its own regulations, policies and guidelines. This report is posted on the UN’s own website!

Why would the UN violate its own policies? Because it is chock full of Technocrats who are dedicated to the total control of all people on planet earth. TN has already discussed the utter lack of ethics and morality in this Technocrat mindset, where the ends justify the means. ⁃ TN Editor 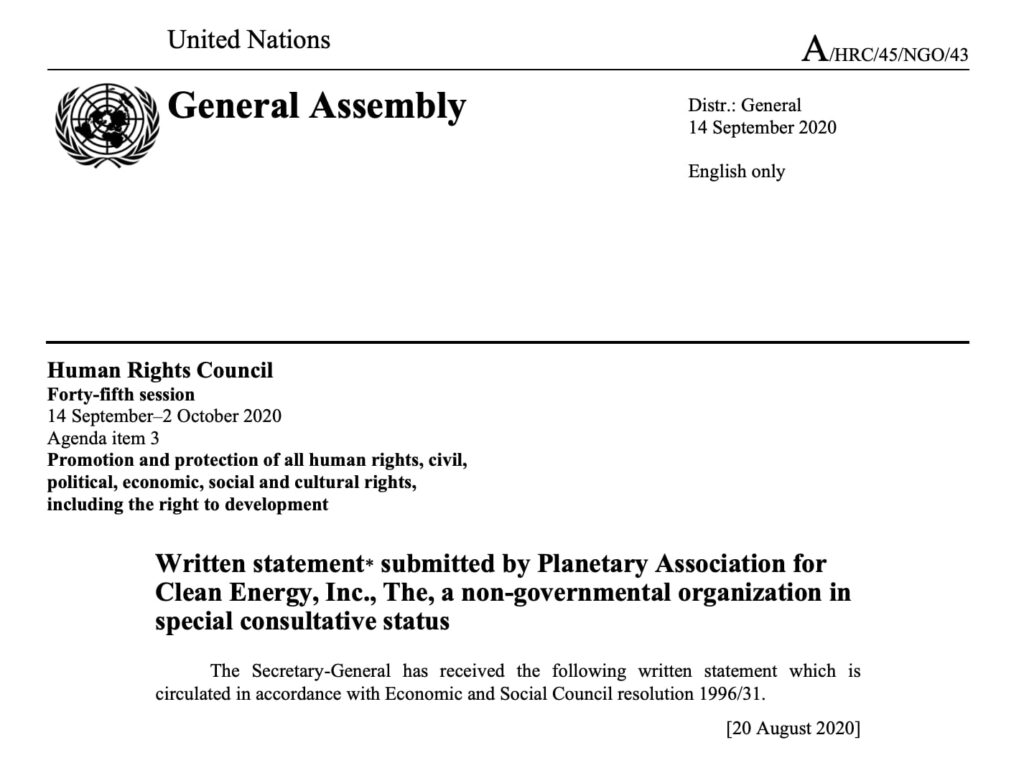 However, compulsory vaccination violates the right to informed consent, one of the most fundamental ethics in medicine and a human right recognized under international law, including the United Nations International Covenant on Civil and Political Rights of 1966, the Universal Declaration on Bioethics and Human Rights of 2005, the Convention on the Rights of Persons with Disabilities and its Optional Protocol of 2006 and under internationally recognized agreements such as the Council for International Organizations of Medical Sciences International Ethical Guidelines for Biomedical Research Involving Human Subjects of 2002, and the World Medical Association Declaration Of Helsinki of 1964, revised in 2013.

The United Nations (UN) and WHO are legally obligated to uphold the right to informed consent yet have instead been complicit in violating it.

For example, the United Nations Children’s Fund (UNICEF) praised the Maldives government for passing a law in November 2019 that effectively outlawed the exercise of the right to informed consent by threatening parents with prosecution for non-compliance with public vaccine policy.

In January 2020, two articles in The BMJ (formerly British Medical Journal) revealed that the WHO had been sponsoring a malaria vaccine trial that included 720,000 children in three African countries without having ensured that the prior informed consent of the parents had been obtained. Most egregiously, parents had not been informed that earlier trials had found the vaccine to be associated with an increased risk of childhood mortality, particularly among girls.

WHO also promotes the diphtheria, tetanus, and whole-cell pertussis (DTP) vaccine in global vaccination campaigns, despite the best available scientific evidence showing it to be associated with an increased rate of childhood mortality. While the vaccine may protect against the target diseases, it appears to detrimentally affect the immune system in a way that makes children more vulnerable to other diseases. This “non-specific effect” has been found to be true for non-live vaccine generally

Additionally, the members of the WHO committee tasked with reviewing the evidence had conflicts of interest, including three having ties to GlaxoSmithKline (GSK), one of the manufacturers of DTP vaccines and the manufacturer of the experimental malaria vaccine.

The public is repeatedly assured by public health officials and the media that “vaccines are safe and effective”, but in the absence of randomized placebo-controlled trials comparing long-term health outcomes, including mortality, between vaccinated and unvaccinated individuals, that statement is not justifiable.Vaccines do not undergo such trials before licensing. Nor are whole vaccine schedules studied for safety. With respect to the routine childhood vaccine schedule recommended by the United States of America (US) Centers for Disease Control and Prevention (CDC), the Institute of Medicine in 2013 observed that “studies designed to examine the long-term effects of the cumulative number of vaccines or other aspects of the immunization schedule have not been conducted.”

There are many legitimate concerns about vaccines in addition to their non-specific effects. Policymakers do not consider the opportunity costs of vaccination, such as the superiority of immunity acquired naturally compared to that conferred by vaccination.

For example, studies have found that having a flu shot annually could increase the risk of infection with novel influenza strains, as well as with non-influenza viruses, in part due to the lost opportunity to acquire the cross-protective, cell-mediated immunity conferred by infection.

A complementary hypothesis is the phenomenon of “original antigenic sin”, whereby the first experience of the immune system with an antigen determines future responses. Priming the immune system with antigen components of the influenza vaccine could potentially cause a mismatched antibody response to strains that the vaccine is not designed to protect against, thereby increasing the risk of infection as compared to an immune response in which naive T and B cells are instructed to fight off the infecting virus.

This phenomenon might help explain an increased risk of serious dengue infection among Filipino children who received the dengue vaccine and who had not already experienced a prior infection. This finding led the Philippines to the withdrawal of the vaccine, which the government had implemented into its childhood schedule upon the recommendation of WHO, despite earlier data having indicated that the vaccine might cause precisely that outcome.

A related hypothesis is that of “antibody dependent enhancement” (ADE), whereby vaccine-induced antibodies, instead of protecting the individual from subsequent infection, enhance the infection and thereby increase the risk of severe disease.

Attempts to develop a vaccine for severe acute respiratory syndrome coronavirus (SARS) were impeded by this phenomenon, whereby vaccinated animals were found to be at increased risk of viral infection. This past experience has raised concerns about the potential for ADE with vaccines under development for SARS-CoV-2.

As another example of opportunity cost, surviving measles is associated with a reduced rate of all-cause mortality in children, and this survival benefit appears to more than offset measles deaths in populations with a low mortality rate from acute measles infection.

Additionally, measles infection has been observed to cause regression of cancer in children and has been associated with a decreased risk of numerous diseases later in life, including degenerative bone disease, certain tumours, Parkinson’s disease, allergic disease, chronic lymphoid leukaemia, both non-Hodgkin lymphoma and Hodgkin lymphoma, and cardiovascular disease.

Other infections have also been associated with health benefits, such as a reduced risk of leukaemia among children who experience Haemophilus influenzae type b infection during early childhood.

There is also the potential for mass vaccination to put evolutionary pressure on pathogens, as has been seen with the diphtheria, tetanus and acellular pertussis (DTaP) vaccine, and the emergence of pertussis strains lacking pertactin, a key antigen component de of the vaccine. According to CDC, such strains “may have a selective advantage in infecting DTaPvaccinated persons.”

Population effects of vaccination must be considered in addition to their effects on individuals. Data suggest that the varicella (chicken pox) vaccine has not been cost-effective but has rather increased health care costs due to the inferiority of vaccine-conferred immunity. This is because mass vaccination appears to have shifted the risk burden away from children, in whom it is generally a benign illness, and onto adolescents and adults, who are at greater risk of complications. Due to the loss of immunologic boosting from repeated exposures, elderly people who had chicken pox as children are at greater risk of shingles. But rather than reconsider existing recommendations, policymakers respond to this problem by recommending a shingles vaccine for the elderly

In the US, many parents are concerned that manufacturers of vaccines recommended by CDC for routine use in childhood enjoy legal immunity from injury lawsuits because this represents a disincentive to pharmaceutical companies in terms of developing safer and more effective means of disease prevention. The Vaccine Injury Compensation Program (VICP) of the US government effectively shifts the financial burden for vaccine injuries away from the industry and onto taxpaying consumers.

For example, children with a mitochondrial disorder may be at increased risk of vaccine injury. In one case adjudicated under the VICP, the US government acknowledged that vaccinations can cause brain damage manifesting as symptoms of autism.

In a 2018 interview, the director of the CDC Immunization Safety Office acknowledged the possibility that vaccines could cause autism in genetically susceptible children but stated that it was “hard to predict who those children might be.”

Legislators do not have the specialized knowledge required to conduct the necessary riskbenefit analysis of the individual. Only the individual, or in the case of a child, the parents, possess that knowledge.

All vaccines carry risks. Compulsory vaccination constitutes a gross violation of the right to informed consent. Governments urgently need to orient health policies towards protecting rather than violating this human right.