Earth’s breathable atmosphere is key for life, and a new study suggests that the first burst of oxygen was added by a spate of volcanic eruptions brought about by tectonics.

The evolution of life as depicted in a mural at NASA Ames Research Center in Mountain View, California. The rise of oxygen from a trace element to a primary atmospheric component was an important evolutionary development. 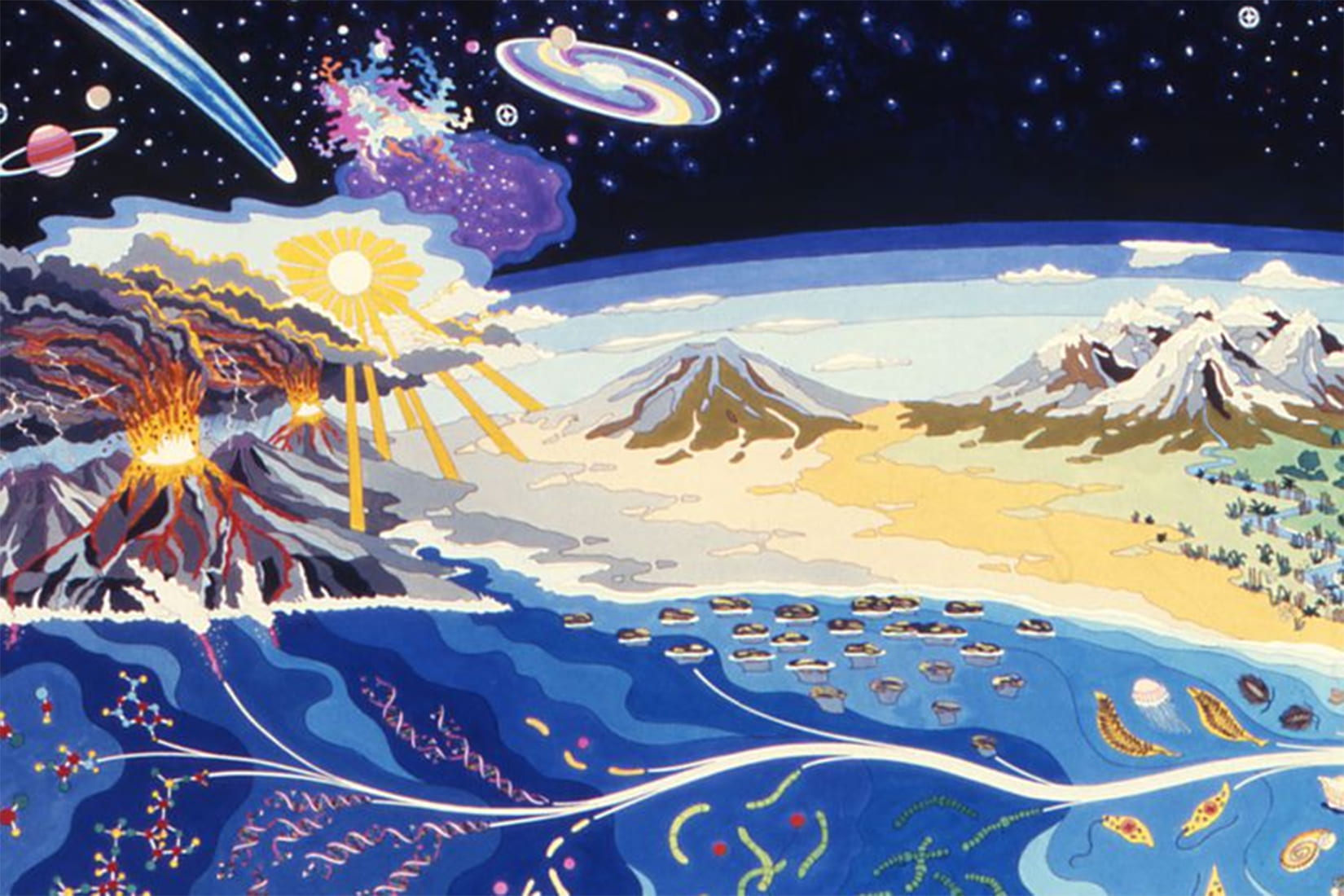 The study by geoscientists at Rice University offers a new theory to help explain the appearance of significant concentrations of oxygen in Earth’s atmosphere about 2.5 billion years ago, something scientists call the Great Oxidation Event (GOE). The research appears this week in Nature Geoscience.

“What makes this unique is that it’s not just trying to explain the rise of oxygen,” said study lead author James Eguchi, a NASA postdoctoral fellow at the University of California, Riverside who conducted the work for his Ph.D. dissertation at Rice. “It’s also trying to explain some closely associated surface geochemistry, a change in the composition of carbon isotopes, that is observed in the carbonate rock record a relatively short time after the oxidation event. We’re trying explain each of those with a single mechanism that involves the deep Earth interior, tectonics and enhanced degassing of carbon dioxide from volcanoes.”

Eguchi’s co-authors are Rajdeep Dasgupta, an experimental and theoretical geochemist and professor in Rice’s Department of Earth, Environmental and Planetary Sciences, and Johnny Seales, a Rice graduate student who helped with the model calculations that validated the new theory.

Scientists have long pointed to photosynthesis — a process that produces waste oxygen — as a likely source for increased oxygen during the GOE. Dasgupta said the new theory doesn’t discount the role that the first photosynthetic organisms, cyanobacteria, played in the GOE.

Geoscientists (from left) James Eguchi, Johnny Seales and Rajdeep Dasgupta published a new theory that attempts to explain the first appearance of significant concentrations of oxygen in Earth’s atmosphere about 2.5 billion years ago as well as a puzzling shift in the ratio of carbon isotopes in carbonate minerals that followed. 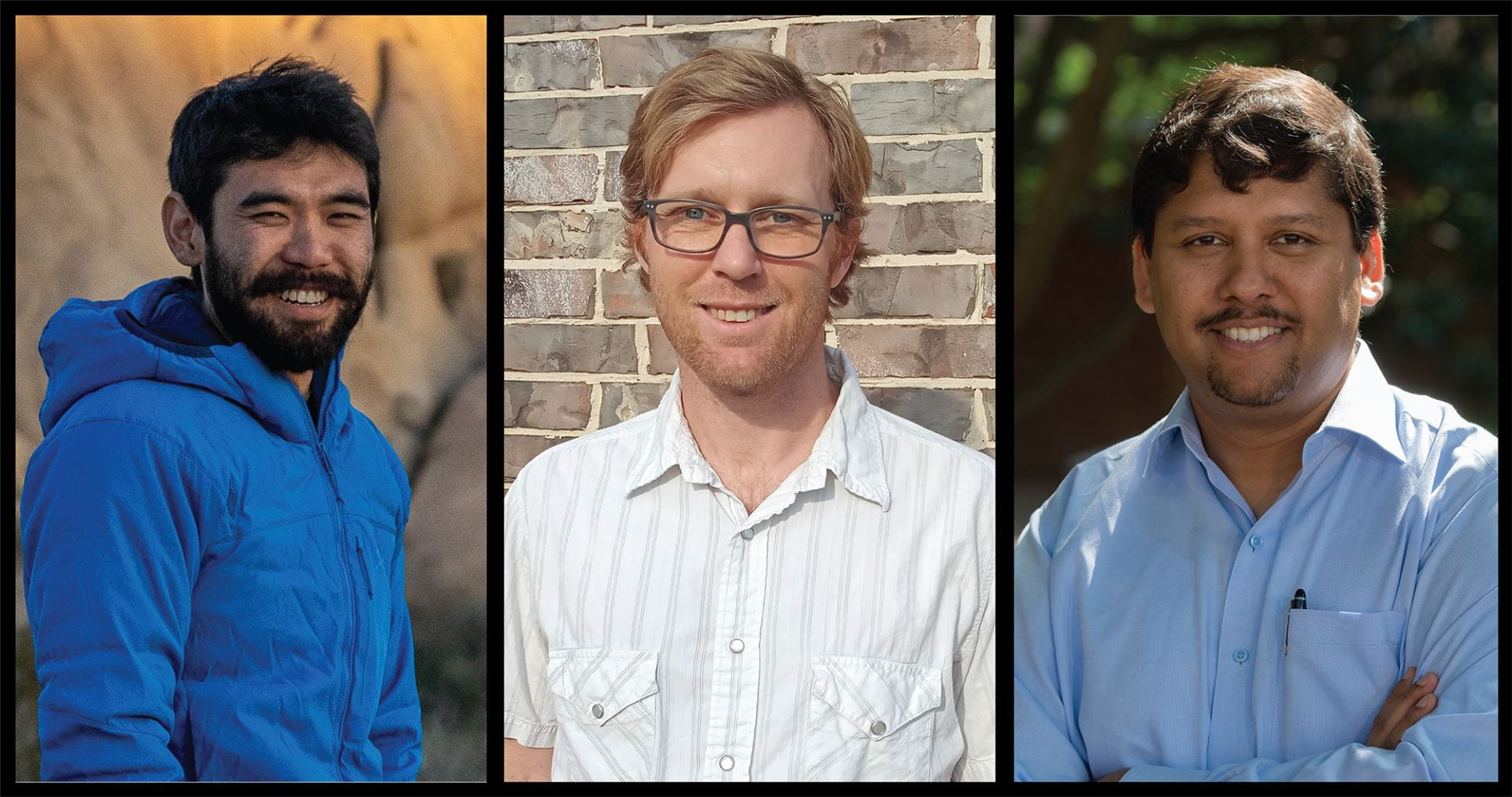 “Most people think the rise of oxygen was linked to cyanobacteria, and they are not wrong,” he said. “The emergence of photosynthetic organisms could release oxygen. But the most important question is whether the timing of that emergence lines up with the timing of the Great Oxidation Event. As it turns out, they do not.”

Cyanobacteria were alive on Earth as much as 500 million years before the GOE. While a number of theories have been offered to explain why it might have taken that long for oxygen to show up in the atmosphere, Dasgupta said he’s not aware of any that have simultaneously tried to explain a marked change in the ratio of carbon isotopes in carbonate minerals that began about 100 million years after the GOE. Geologists refer to this as the Lomagundi Event, and it lasted several hundred million years.

One in a hundred carbon atoms are the isotope carbon-13, and the other 99 are carbon-12. This 1-to-99 ratio is well documented in carbonates that formed before and after Lomagundi, but those formed during the event have about 10% more carbon-13.

Eguchi said the explosion in cyanobacteria associated with the GOE has long been viewed as playing a role in Lomagundi.

“Cyanobacteria prefer to take carbon-12 relative to carbon-13,” he said. “So when you start producing more organic carbon, or cyanobacteria, then the reservoir from which the carbonates are being produced is depleted in carbon-12.”

Eguchi said people tried using this to explain Lomagundi, but timing was again a problem.

This figure illustrates how inorganic carbon cycles through the mantle more quickly than organic carbon, which contains very little of the isotope carbon-13. Both inorganic and organic carbon are drawn into Earth’s mantle at subduction zones (top left). Due to different chemical behaviors, inorganic carbon tends to return through eruptions at arc volcanoes above the subduction zone (center). Organic carbon follows a longer route, as it is drawn deep into the mantle (bottom) and returns through ocean island volcanos (right). The differences in recycling times, in combination with increased volcanism, can explain isotopic carbon signatures from rocks that are associated with both the Great Oxidation Event, about 2.4 billion years ago, and the Lomagundi Event that followed. 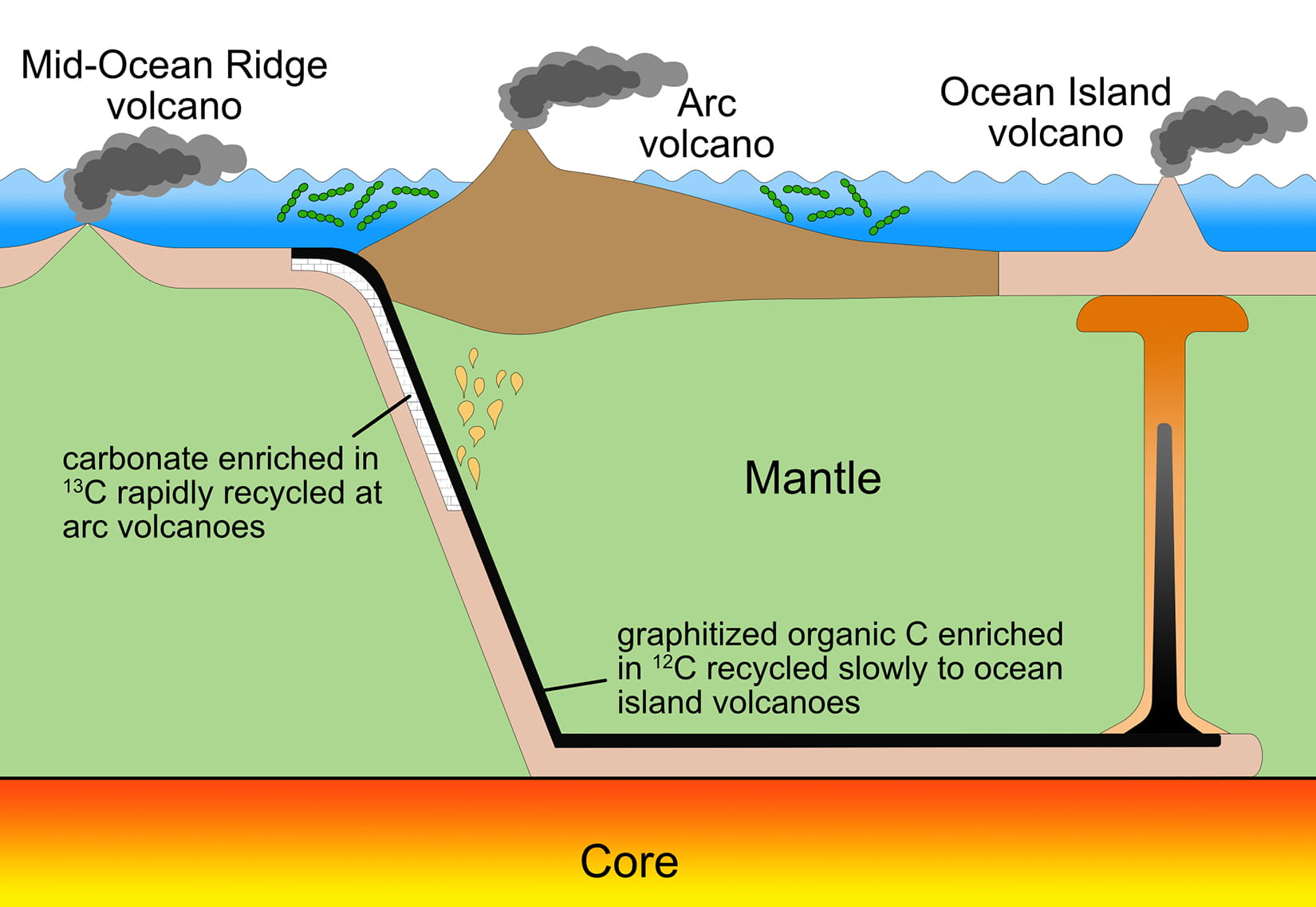 “When you actually look at the geologic record, the increase in the carbon-13-to-carbon-12 ratio actually occurs up to 10s of millions of years after oxygen rose,” he said. “So then it becomes difficult to explain these two events through a change in the ratio of organic carbon to carbonate.”

The scenario Eguchi, Dasgupta and Seales arrived at to explain all of these factors is:

“It’s kind of a big cyclic process,” Eguchi said. “We do think the amount of cyanobacteria increased around 2.4 billion years ago. So that would drive our oxygen increase. But the increase of cyanobacteria is balanced by the increase of carbonates. So that carbon-12-to-carbon-13 ratio doesn’t change until both the carbonates and organic carbon, from cyanobacteria, get subducted deep into the Earth. When they do, geochemistry comes into play, causing these two forms of carbon to reside in the mantle for different periods of time. Carbonates are much more easily released in magmas and are released back to the surface at a very short period. Lomagundi starts when the first carbon-13-enriched carbon from carbonates returns to the surface, and it ends when the carbon-12-enriched organic carbon returns much later, rebalancing the ratio.”

Eguchi said the study emphasizes the importance of the role that deep Earth processes can play in the evolution of life at the surface.

Earth’s atmosphere as seen from the International Space Station July 20, 2006. 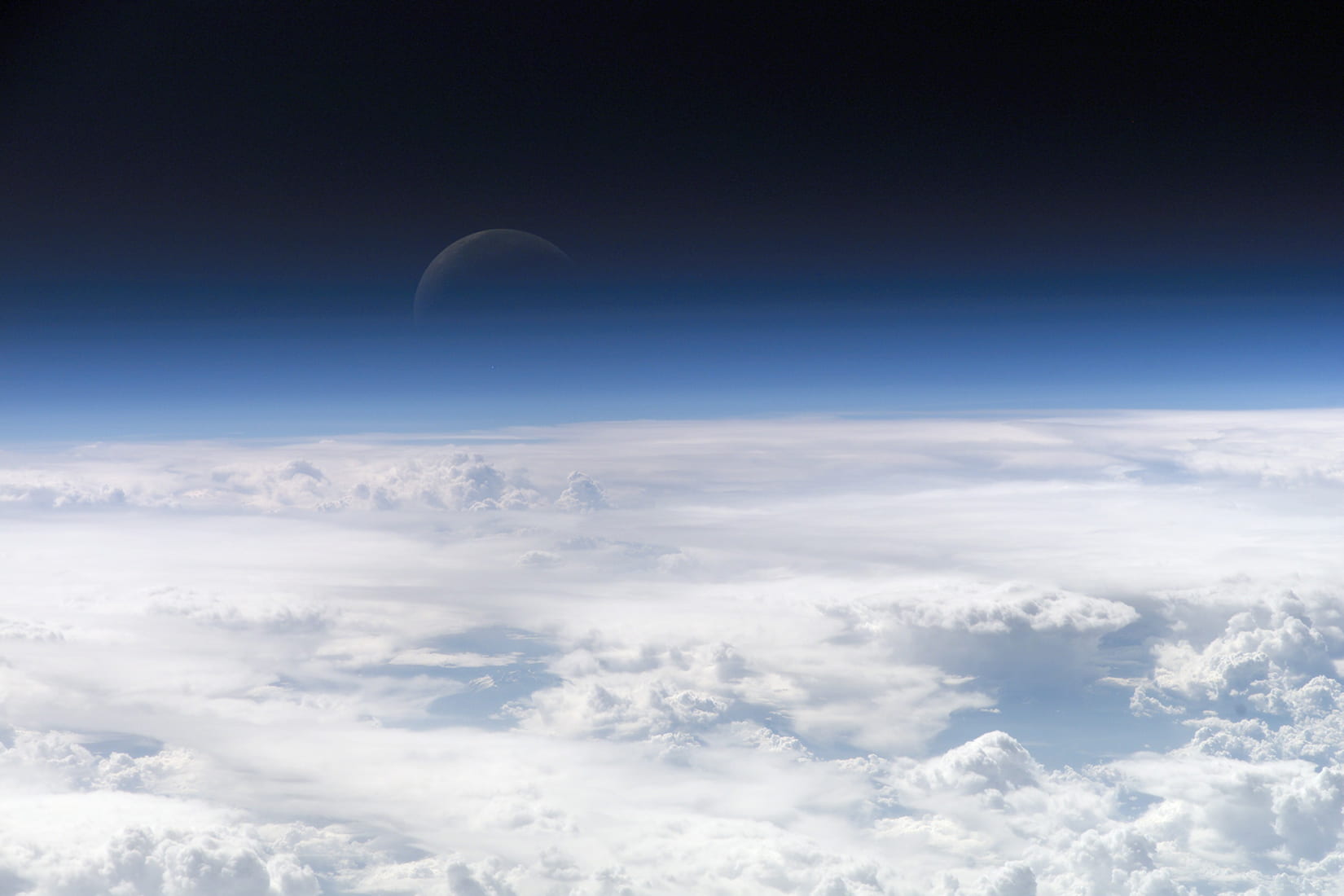 “We’re proposing that carbon dioxide emissions were very important to this proliferation of life,” he said. “It’s really trying to tie in how these deeper processes have affected surface life on our planet in the past.”

Dasgupta is also the principal investigator on a NASA-funded effort called CLEVER Planets that is exploring how life-essential elements might come together on distant exoplanets. He said better understanding how Earth became habitable is important for studying habitability and its evolution on distant worlds.

“It looks like Earth’s history is calling for tectonics to play a big role in habitability, but that doesn’t necessarily mean that tectonics is absolutely necessary for oxygen build up,” he said. “There might be other ways of building and sustaining oxygen, and exploring those is one of the things we’re trying to do in CLEVER Planets.”

The research was supported by the National Science Foundation, NASA and the Deep Carbon Observatory.

Source: http://www.ineffableisland.com/2019/12/breathing-thank-volcanoes-tectonics-and.html
BeforeItsNews Announcements
Step 1: Get the Telegram App & Get Stories Direct to Your Phone or Computer Without Censorship! Get the Telegram App in the App Store or at
https://telegram.org/

Top Global
Warehouse full of aid supplies for Hurricane Maria survivors just discovered in Puerto Rico
Volcano erupts on southwestern Japan island
New Mexico Becomes the Latest 2nd Amendment Confiscation State! Great Dave Hodges Video!
We Will Drive The Whole World Into So Much Chaos, They Will Beg Us For Relief, Enter The New World Order
Mystery Chinese Virus Has Likely Infected Over 1,700 As It Sweeps Across China And Japan
The World Economic System Must Change From Quantity To Quality
Special Urgent Message To Donald Trump & Kim Jong Un, Team Capitalist & Team Communist
The Global Currency Reset Event Is Happening In 2020
Extremely Important Info From Senator Amanda Chase (R-VA) and VCDL Regarding 1/20/20 Virginia Rally
Megxit: Harry and Meghan Give Up Royal Titles
Loading...
Top Alternative
The scandal hiding in plain sight is our intelligence establishment’s misuse of its authority to muck around in the 2016 election.
Scenes From Virginia’s Capitol: Militarized Police Arrive In Richmond
Scientists Share Facts About Vaccines At World Health Organization Conference For Vaccine Safety
Red Alert! Virginia Will Be Used To Frame President Trump! - Great Video
X22Report: We Have a Witness, Durham Following Strong Paper Trail, but the Best Is Yet to Come! (Video)
Virginia : FAA Declares "National Defense Airspace" Over Richmond, Live Streams on DLive! - Great Video
TERRIFYING VIDEO! IF I WERE THE DEVIL - Future Proves Past Again! Do NOT Miss This SHORT But POWERFUL Video!
Photos of a UFO Buzzing a Commercial Jet Over the United Kingdom
Salmon Patties (aka Salmon Cakes or Croquettes)
Lucifer Decoded - Revised Documentary Series- Mystery Babylon Exposed