Scientists have long opposed the idea that dinosaurs lived in aquatic habitats. Now, an international team of researchers, supported by the National Geographic Society, has discovered unambiguous evidence that Spinosaurus aegyptiacus, the longest predatory dinosaur known to science, was aquatic and used tail-propelled swimming locomotion to hunt for prey in a massive river system. It is the first time that such an adaptation has been reported in a dinosaur.

The findings, published today in the journal Nature and featured on Nationalgeographic.com, are based on a multidisciplinary investigation of the world’s only existing Spinosaurus skeleton, found in the Kem Kem region of the Moroccan Sahara. The skeleton is now also the most complete one to date for a Cretaceous predatory dinosaur from mainland Africa.
Two Spinosaurus hunt Onchopristis, a prehistoric sawfish, in the waters of the Kem Kem river system in what is now Morocco. 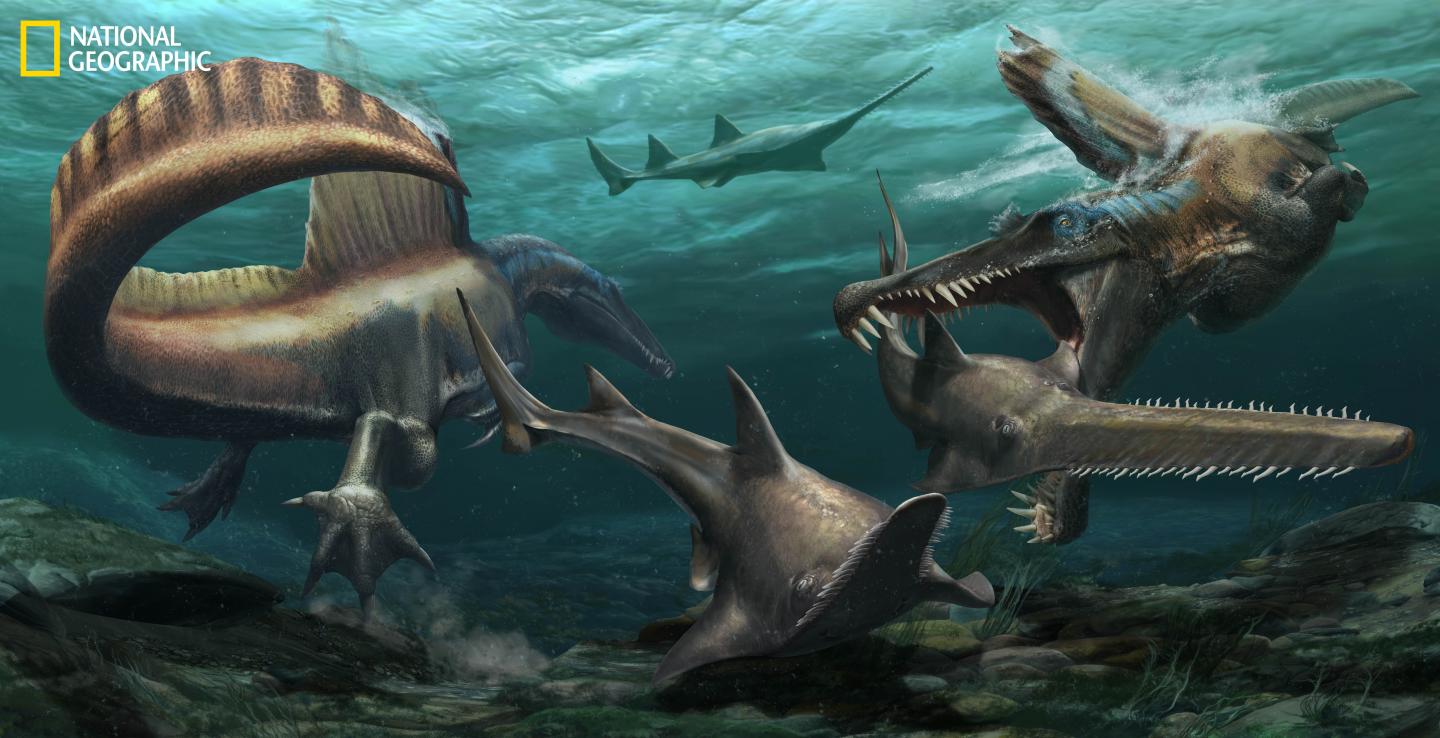 Led by National Geographic Explorer and University of Detroit Mercy paleontologist Dr. Nizar Ibrahim, the team returned to the site where parts of a Spinosaurus skeleton had first been uncovered in 2008. In a previous study, Spinosaurus had been identified as a fish-eating dinosaur with adaptations for an amphibious lifestyle, supported by its relatively short hindlimbs, wide feet, dense bones and elongated jaws studded with conical teeth. However, suggestions that it may have been a truly water-dwelling dinosaur were met with considerable opposition, in large part because the partial skeleton provided little to no evidence of the propulsive structure needed to move such a giant dinosaur through water.

Between 2015 and 2019, Ibrahim’s team recovered many more fossils of the skeleton, including a remarkably complete, fin-like tail capable of extensive lateral movement and characterized by extremely long spines.

After preparing all of the fossils, the team used photogrammetry to digitally capture the anatomy of the tail.

To quantitatively assess the performance of the tail, a team of Harvard researchers made a flexible model and attached it to a robotic system that mimics swimming movements. They then compared the swimming performance of the model Spinosaurus tail to model tails from other animals, including crocodiles, newts and other dinosaurs. The results were fully consistent with the idea of a truly water-dwelling, tail-propelled, “river monster.”

“This discovery is the nail in the coffin for the idea that non-avian dinosaurs never invaded the aquatic realm,” said Ibrahim. “This dinosaur was actively pursuing prey in the water column, not just standing in shallow waters waiting for fish to swim by. It probably spent most of its life in the water.” The discovery also points to the possibility of a persistent and widespread invasion of aquatic habitats by relatives of Spinosaurus.

“This new discovery changes our current understanding of dinosaurs and reflects Dr. Ibrahim’s boundless curiosity and dedication to uncovering the secrets of the Sahara’s dinosaurs,” said Alex Moen, vice president of explorer programs at the National Geographic Society. “His work is at the nexus of science and exploration, and embodies the unique role National Geographic has in illuminating the wonder of our world.”

Today, all of the original bones found throughout the project are housed at the University of Casablanca in Morocco. For Professor Samir Zouhri, capacity and infrastructure building in North Africa was a major goal of this research project.

“In the past, Moroccan fossils like this one would inevitably end up in collections in Europe, Asia or the United States,” he stated. “Now we have the best collection of Kem Kem fossils right here in Morocco, including the most complete predatory dinosaur from the Cretaceous of mainland Africa. This is a game changer.”

About the Research Team

About the National Geographic Society

The National Geographic Society is a global nonprofit organization that uses the power of science, exploration, education and storytelling to illuminate and protect the wonder of our world. Since 1888, National Geographic has pushed the boundaries of exploration, investing in bold people and transformative ideas, providing more than 14,000 grants for work across all seven continents, reaching 3 million students each year through education offerings, and engaging audiences around the globe through signature experiences, stories and content. To learn more, visit http://www.nationalgeographic.org

Source: http://www.ineffableisland.com/2020/04/swimming-dinosaut-new-fossils-rewrite.html
BeforeItsNews Announcements
Step 1: Get the Telegram App & Get Stories Direct to Your Phone or Computer Without Censorship! Get the Telegram App in the App Store or at
https://telegram.org/