The origin of our teeth goes back more than 400 million years back in time, to the period when strange armored fish first developed jaws and began to catch live prey. We are the descendants of these fish, as are all the other 60,000 living species of jawed vertebrates. An international team of scientists led by Uppsala University, in collaboration with the ESRF, has digitally ‘dissected’, for the first time, the most primitive jawed fish fossils with teeth found near Prague more than 100 years ago. The results, published in Science, show that their teeth have surprisingly modern features and give a new insight into the origin of our teeth.

A tropical reef in the Czech Republic, 409 million years ago: Radotina, one of the most primitive jawed vertebrates with teeth, emerges from its hiding place in the empty shell of a giant nautiloid to hunt for food. 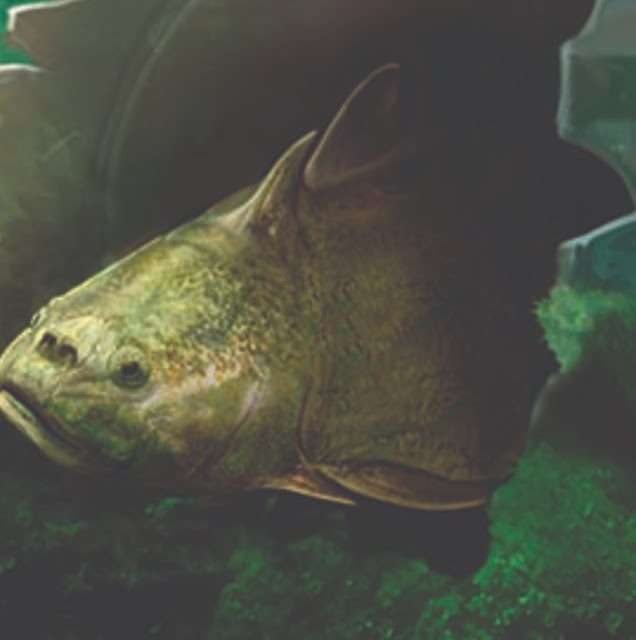 Teeth in current jawed vertebrates reveal some consistent patterns: for example, new teeth usually develop on the inner side of the old ones and then move outwards to replace them (in humans this pattern has been modified so that new teeth develop below the old ones, deep inside the jawbone). There are, however, several differences between bony fish (and their descendants the land animals) and sharks; for example the fact that sharks have no bones at all, their skeleton is made of cartilage, and neither the dentine scales nor the true teeth in the mouth attach to it; they simply sit in the skin. In bony fish and land animals, the teeth are always attached to jaw bones. In addition, whilst sharks shed their worn-out teeth entire, simply by detaching them from the skin, bony fish and land animals shed theirs by dissolving away the tooth bases.

This diversity raises many questions about the origin of teeth. Until now, researchers have focused on fossils of a group of ancient fish that lived about 430 to 360 million years ago, called the arthrodires, which were the only stem jawed vertebrates in which teeth were known. However, they struggled to understand how they could have evolved into the teeth of modern vertebrates, as arthrodire teeth are so different in position and mode of tooth addition in comparison to bony fish and sharks.
Scanning the most primitive jawed fishes

A team from Uppsala University, Charles University (Czech Republic), Natural History Museum in London (UK), National Museum in Prague (Czech Republic) and the ESRF set out to determine whether this peculiar type of dentition was really ancestral to ours, or just a specialised offshoot off the lineage leading towards modern jawed vertebrates.

With this aim, they turned to the acanthothoracids, another early fish group that are believed to be more primitive than the arthrodires and closely related to the very first jawed vertebrates. The problem with acanthothoracids is that their fossils are rare and always incomplete. The very finest of them come from the Prague Basin in the Czech Republic, from rocks that are just over 400 million years old, and were collected at the turn of the last century. They have proved difficult to study by conventional techniques because the bones cannot be freed from the enclosing rock, and have therefore never been investigated in detail.

Members of the research team mounting a specimen in the experimental hutch of ID19 beamline. The researchers used synchrotron microtomography at the ESRF’s ID19 beamline, which allowed them to visualise the internal structure of the fossils in 3D without damaging them.

“The results were truly remarkable, including well-preserved dentitions that nobody expected to be there” says Valéria Vaškaninová, lead author of the study and scientist from Uppsala University. Follow-up scans at higher resolution allowed the researchers to visualize the growth pattern and even the perfectly preserved cell spaces inside the dentine of these ancient teeth.

Like arthrodires, the acanthothoracid dentitions are attached to bones. This indicates that bony fish and land animals retain the ancestral condition in this regard, whereas sharks are specialized in having teeth that are only attached to the skin – in contrast to the common perception that sharks are primitive living vertebrates. Again, like arthrodires, the teeth of acanthothoracids were not shed.
More different from arthrodires than expected “To our surprise, the teeth perfectly matched our expectations of a common ancestral dentition for cartilaginous and bony vertebrates.” explains Vaškaninová.

“These findings change our whole understanding of the origin of teeth” says co-author Per Ahlberg, professor at Uppsala University. And he adds: “Even though acanthothoracids are among the most primitive of all jawed vertebrates, their teeth are in some ways far more like modern ones than arthrodire dentitions. Their jawbones resemble those of bony fish and seem to be directly ancestral to our own. When you grin at the bathroom mirror in the morning, the teeth that grin back at you can trace their origins right back to the first jawed vertebrates.”