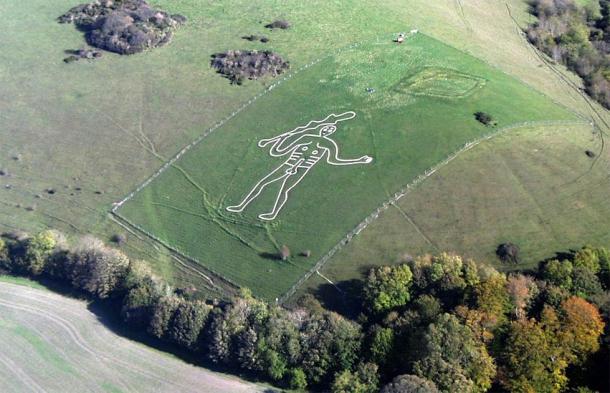 In Britain, researchers believe that they are finally able to date the mysterious gigantic chalk figure at Cerne Abbas . The Cerne Abbas Giant has intrigued people for at least a century as its origins became uncertain and lost through time. Now based on an examination of snail shells at the site, experts believe that the giant is not as ancient as once thought and indeed may be an example of 17 th century political propaganda.

The Cerne Abbas Giant is 150-feet-tall (50 meter) chalk figure that was cut into an English chalk hill. It can be seen on a hillside overlooking the village of Cerne Abbas, in Dorset. This figure is of a naked man, wielding a club and it was widely believed to date back to the Roman or Celtic period , at least 2000 years ago. In 2019, the gigantic figure was restored by a team of volunteers who hammered tons of new chalk into the giant’s outline. The land where the Cerne Abbas Giant lies was given to the National Trust , an organization dedicated to preserving British heritage sites, a century ago, by the Pitts-Rivers family. 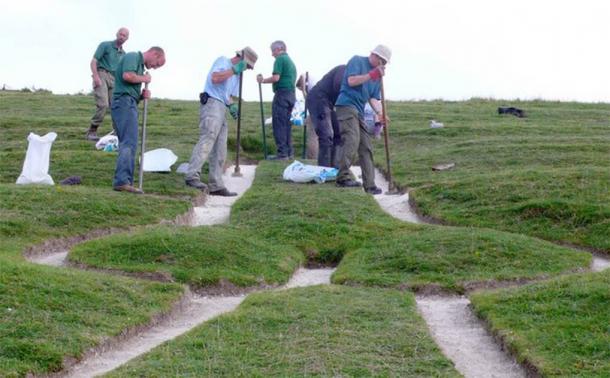 Dating the Cerne Abbas Giant With Soil Samples and Snails

To mark the centenary of the transfer of the Cerne Abbas Giant to the management of the National Trust, authorities decided to date the figure. In March 2020 a series of tests were carried out to determine ‘‘a ‘date-range’ for when the landmark was created’’ reports the BBC. Similar tests on another famous gigantic chalk figure, known as the Uffington White Horse , in Oxfordshire, revealed it to be 3000 years old. 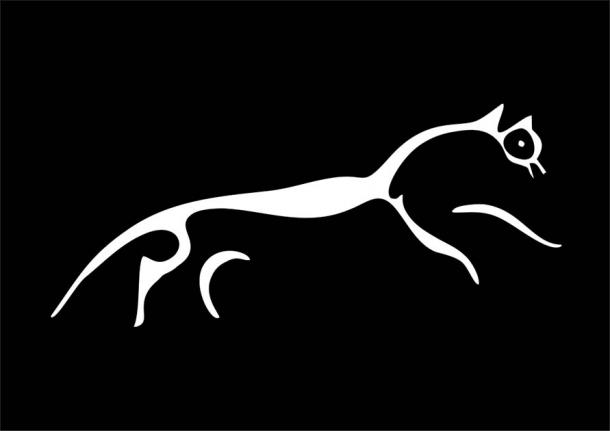 Uffington White Horse after William Plenderleath (1831 – 1906) from his book The white horses of the west of England (William Plenderleath / Public domain )
A number of soil samples were taken from the giant’s outline and they are being subjected to a series of different tests. The soil testing process has been delayed because of the current COVID-19 pandemic, however, one set of results have come back which related to dead snails found in the chalk lines. The findings were explosive. The snail test results revealed that the Cerne Abbas Giant was far younger than commonly thought.

Medieval Snails Suggest Cerne Abbas Giant is Not That Old!

The Daily Mail quotes Michael Allen, an environmental archaeologist, as stating that the ‘snails including the tiny vineyard snail or ‘Cernuella virgata’ that were found in the soil samples taken from the giant did not reach England until the late medieval period. This means that the figure could not date to ancient times. Dr Allen is quoted by the BBC as saying that ‘They arrived here accidentally, probably in straw and hay used as packing for goods from the continent’ in the Middle Ages. This most likely occurred in the 12 th or the 13 th century AD.

This finding contradicts previous theories and local folklore. Some experts believe that the giant figure was a Celtic deity because the ‘giant is stylistically similar to a god found on a skillet handle in nearby Hod Hill that has been dated back to around 10–51 AD’ reports The Daily Mail . The fact that the figure is naked with an erect penis prompted many to believe that the giant was related to a fertility cult .

Another theory was proposed by a local clergyman, William Stukeley, in the 18 th century AD.  He believed the giant chalk figure was a depiction of Hercules, one of the most popular gods in the Graeco-Roman world. He argued that the giant was carved into the hill by local Romano-British people in the first century AD.

The discovery of snails that did not arrive in Britain until the Middle Ages means these theories are no longer valid. It seems likely that the giant was carved into the hillside sometime in the post-medieval period . One theory claims the giant was created during the English Civil War to mock or satirize Oliver Cromwell , who made himself de-facto ruler of Britain in the 17 th century AD.


Source: https://www.ancient-origins.net/news-history-archaeology/chalk-figure-0013954
Before It’s News® is a community of individuals who report on what’s going on around them, from all around the world.

Loading...
"Not by might, nor by power, but by my spirit, saith the Lord of hosts." Zechariah 4:6
BEFORE IT'S NEWS ON TELEGRAM
GET THE TELEGRAM APP - https://telegram.org/ JOIN OUR CHANNEL - https://t.me/BeforeitsNews
Read it..
BEFORE IT'S NEWS
SIGN UP FOR OUR NEWSLETTER
Today's Top Stories
X22Report: Good Guys Are In Control Of The Fed, Transition Being Prepped, Silver Is The Key! - Bix Weir Video
X22Report: Do You See How it’s All Coming Together, Drip, Crimes Against Humanity, Drip, Treason! - Must Video
The Cult of Q: Who Is Q and Who Is Q Anon? The Riddle Has Been Solved - Great Video by Shaking My Head and Decode
Human Sacrifice & The Myths of Molech – Baal Worship
Hold Your Horses: Silver Crash Imminent!
New Fabric Could Help Keep You Cool In The Summer, Even Without A/C
Wrong Idea for Centuries: How Human Sperm Really Swims
Totally New: “Drawn-on-Skin Electronics" with an Ink Pen Can Monitor Physiological Information
NASA Sun Data Helps New Model Predict Disruptive X-Class Solar Flares
California's Sinking Coastal Hotspots Measured with Millimeter Accuracy by Satellite
Loading...
Featured
10 Things That Happen When the Economy Collapses (Video)
Breaking!! Dollar Collapse! 30 Million Americans on the Verge of Hunger!! - Great Video
Big Pharma, Big Tech and Big Media Are Waging an All-Out War Against Humanity
Dr. Dave Janda from “Operation Freedom” Interviewed by Mike Adams, on Threats to America & How We Achieve Victory! - Video
Marxist Co-founder of Black Lives Matter Patrisse Cullors Demands Democratic Party Pass Legislation to Defund the Police, Abolish ICE and DEA
Deep State-Big Pharma Conspiracy Blown Wide Open, Hydroxychloroquine Truth Explodes Across the Internet - HCQgate
The Coronavirus Response Is Pure State Terrorism Based on Propaganda
“The Virus Is Over, Stupid” in 3 Graphs
Are “gain-of-function” experiments the source of the COVID-19 pandemic?
Sarah Westall: US Mint Losing Trust, JP Morgan Cornered Silver & Crushing Competitors
Loading...
Top Global
You Will Likely Require a Sick Bag on Hand to View This Effort by the BBC.
The Coronavirus Response Is Pure State Terrorism Based on Propaganda
“The Virus Is Over, Stupid” in 3 Graphs
President Trump will ban Chinese-Owned TikTok as soon as tomorrow
The Proof: Millions Forced by Law to Wear Masks That Are Completely Useless
It’s Our Bloody Country – and We Want it Back
Major Jordan Wrote Down All The Explosive Deep State Secrets In His Diaries - He Was Instrumental As A Witness To The Communist Theft And Acts Of Treason Of America Transferring American Arms And Technology To The USSR During WWII. One Of The Best Whistleblower Videos Ever.
5G Whistleblower: Coronavirus Test Spreading Virus! You Cannot Catch the Coronavirus / Covid-19 Unless You Take the Covid-19 Test or the Covid-19 Vaccines! Exposing the Covid-19 Lie! Great Videos.
Bat Soup Virus: And Now Dr. Birx Is Recommending Face Shields
COVID-19: How to Cure Thee? Let Me Count the Ways.
Loading...
Top Alternative
Edgar Cayce: There Were Humans in America 10 Million Years Ago
Portland’s Wall of Mom’s Accused of “Anti-Blackness”
Cleopatra's Needle
Progressive Authoritarianism and its Discontents
The Villains of America
Exclusive Coverage, BLM March for Black WomXn
They Don’t Call Them the Dog Days for Nothing
‘The lockdown has caused a humanitarian tragedy’
Twitter Goes On The Attack ~ Ep. 1307 ~ The Dan Bongino Show®
Totally New: “Drawn-on-Skin Electronics" with an Ink Pen Can Monitor Physiological Information