A new genetic and morphological study of South Asia’s hillstream loach (Balitoridae) family is shedding new light on the fishes’ unusual land-walking capabilities, including that of the family’s strangest relative — Cryptotora thamicola — a rare, blind cavefish from Thailand with an uncanny ability to walk on land and climb waterfalls using four limbs that move in salamander-like fashion. 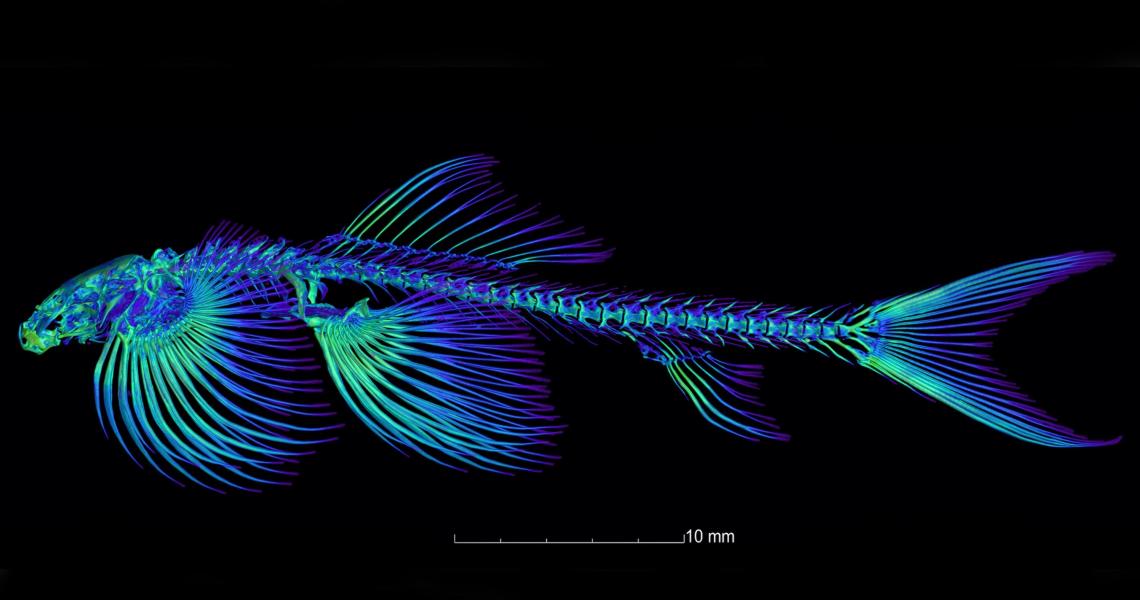 Credit: Zach Randall, Florida Museum of Natural History
In a study published in the Journal of Morphology, a team of researchers from New Jersey Institute of Technology (NJIT), Florida Museum of Natural History, Louisiana State University and Thailand’s Maejo University have successfully pieced together the ancestral relationships that make up the family tree of hillstream loaches (Balitoridae), detailing for the first time a range of unusual pelvic adaptations across the family that have given some of its members an ability to crawl, or even walk as salamanders do, to navigate terrestrial surfaces.

The team’s DNA-based comparative analysis of the fish family, known to currently encompass more than 100 species native to South and Southeast Asia, is the first of its kind to include Cryptotora thamicola — the only living species of fish known to walk on land in a step pattern similar to tetrapods, or four-limbed vertebrates such as reptiles and amphibians.

The results have revealed three dominant variations of pelvic anatomy in the family, notably including key variations of a robust pelvic girdle and elongated sacral rib among many loaches, which researchers expect are central in explaining the different degrees of land-walking behavior exhibited by the fishes. The team says that the family’s modified pelvic features enabling terrestrial locomotion, which were found most pronounced in Cryptotora thamicola, may have been adapted to enhance their odds of survival in rivers and other fast-moving water environments that many Balitoridae inhabit today.

“The modified morphology of these Balitoridae, particularly the enlarged sacral rib connecting the pelvic plate to the vertebral column, is a big part of why studying this family is so exciting,” said Callie Crawford, the study’s corresponding author and Ph.D. candidate at NJIT’s Department of Biological Sciences. “These loaches have converged on a structural requirement to support terrestrial walking not seen in other fishes. What we’ve discovered is three anatomical groupings that have major implications for the biomechanics of terrestrial locomotion of these loaches, and the relationships among these fishes suggest that the ability to adapt to fast-flowing rivers may be what was passed on genetically, more than the specific morphology itself.”

“Now that we have revealed a spectrum of pelvic morphologies among these fishes, we can compare the extent of skeletal support with the walking performance in a species,” said Brooke Flammang, the study’s lead principal investigator and assistant professor of biology at NJIT. “This will allow us to measure the mechanical contribution of robust hips to terrestrial locomotion.”

Unlike most living fishes that feature pelvic fins located more anteriorly and attached to the pectoral girdle, balitorids typically boast a skeletal connection between the pelvic plate (basipterygium) and the vertebral column via a modified sacral rib and its distal ligament. These modifications are understood to help generate force against the ground useful for navigating land. The most extreme example emerged in 2016 with the discovery of Cryptotora thamicola in the fast-flowing aquatic conditions of the Tham Maelana and Tham Susa karst cave systems in northern Thailand. NJIT researchers then first identified that the rare species used a robust pelvic girdle attached to its vertebral column to walk and climb waterfalls with a salamander-like gait. 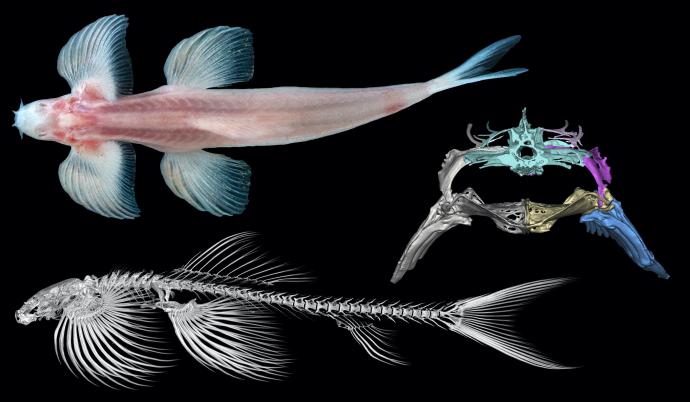 “This trait is likely key to helping these fishes avoid being washed away in the fast-flowing environment that they live in,” said Zach Randall, co-author of the paper and biological scientist at Florida Museum of Natural History. “What’s really cool about this paper is that it shows with high detail that robust pelvic girdles are more common than we thought in the hillstream loach family.”

“The sacral ribs allow forces from the fins pressing against the ground to be transferred to the body so that every time the fin pushes down during a step, the body is pushed up and forward,” explained Flammang. “The increased surface area of the more modified sacral ribs also offers more room for muscle attachment, so fishes such as Cryptotora thamicola can rotate their hips during walking, producing a salamander-like gait.”

To better understand the evolution of the family, the team conducted a broad sampling of μCT-scan data taken from 29 representative specimens, analyzing and comparing skeletal structures, muscle morphology as well as sacral rib shape across 14 of the 16 balitorid genera. The team also sampled genomic datasets of 72 loaches across seven families to reconstruct the evolutionary relationships in the Ballitoridae tree of life. “We were able to use a large survey of museum specimens and CT scanning to incorporate data even from specimens that didn’t have tissue or genetic data intact,” noted Randall.

The results showed that the loaches fall into three distinct morphotypes, which are expected to correlate to how well they are able to maneuver on land: species with a long, narrow rib that meets the pelvic plate; species with a thicker, slightly curved rib meeting the pelvic plate; and species with a robust crested rib interlocking with the pelvic plate. Of the species sampled, eleven fell into the third category with advanced land-walking abilities, such as Cryptotora thamicola, displaying the most robust sacral rib connection between the basipterygium and vertebral column. 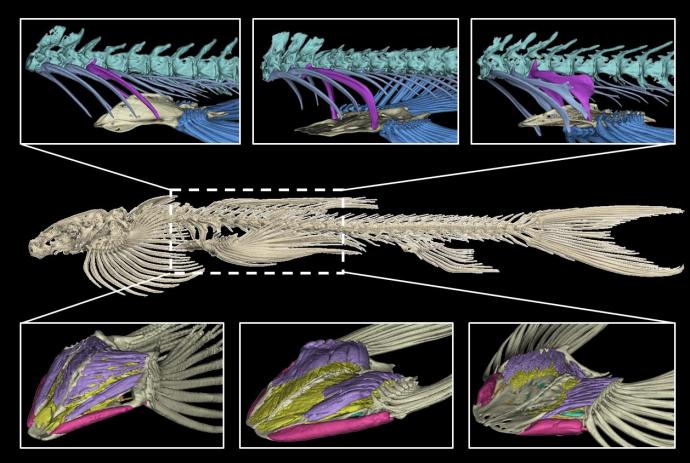 “Our analysis showed that the morphotypes are not grouped by closely related taxa, but instead appear spread out across the phylogeny. That indicates to us that the extent of the modification of these features is less reflecting shared ancestry and more likely a product of adaptation to the flow regimes of their environments,” explained Crawford. “To better understand how and why these distinct morphotypes developed, we need more knowledge of the habitat of each species, including water flow rates, substrate types and how the rivers and streams change between rainy and dry seasons.”

Crawford and colleagues now aim to further investigate the stability physics and muscular forces at play that allow certain species to push their bodies off their ground as they walk. The team, including a recent Rutgers University graduate, Amani Webber-Schultz, recently completed fieldwork in Thailand earlier this year to collect more balitorid specimens, which they are studying using high-speed videos of the fishes walking.

“This will allow us to study details of their walking kinematics and gain even more insight into how walking performance might change between species with different pelvic morphologies,” said Crawford.

The study was supported by the National Science Foundation’s Understanding the Rules of Life Grant # 1839915 to BE Flammang, P Chakrabarty, and LM Page.