Coastal elevation in California. Coastal zones, which are defined to be those with elevations less than 10 m, are shown in red. Segments of the coast with elevations higher than 10 m are colored by a yellow gradient. 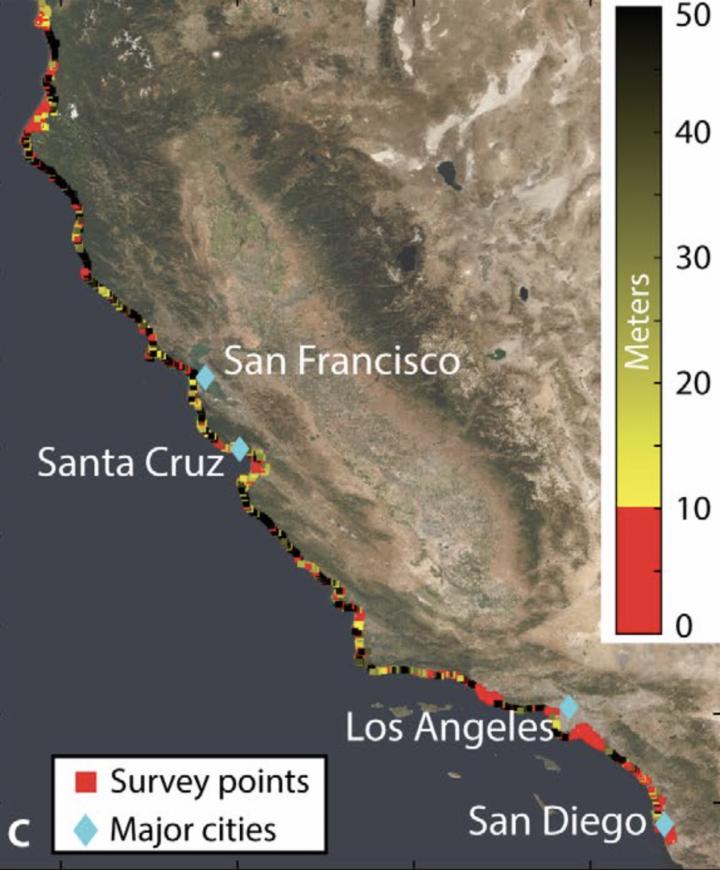 A majority of the world population lives on low lying lands near the sea, some of which are predicted to submerge by the end of the 21st century due to rising sea levels.

They’ve identified local hotspots of the sinking coast, in the cities of San Diego, Los Angeles, Santa Cruz and San Francisco, with a combined population of 4 to 8 million people exposed to rapid land subsidence, who will be at a higher flooding risk during the decades ahead of projected sea-level rise.

“We have ushered in a new era of coastal mapping at greater than 1,000 fold higher detail and resolution than ever before,” said Manoochehr Shirzaei, who is the principal investigator of the NASA-funded project. “The unprecedented detail and submillimeter accuracy resolved in our vertical land motion dataset can transform the understanding of natural and anthropogenic changes in relative sea-level and associated hazards.”

The results were published in this week’s issue of Science Advances (DOI link here).

The research team included graduate student and lead author Em Blackwell, and faculty Manoochehr Shirzaei, Chandrakanta Ojha and Susanna Werth, all from the ASU School of Earth and Space Exploration (Werth has a dual appointment in the School of Geography and Urban Planning).

Em Blackwell had a keen interest in geology, and as Blackwell began graduate school, the applications of InSAR drew them to pursue this project. InSAR uses radar to measure the change in distance between the satellite and ground surface, producing highly accurate deformation maps of the Earth’s surface at 10s m resolution over 100s km spatial extent.

Land subsidence can occur due to natural and anthropogenic processes or a combination of them. The natural processes comprise tectonics, glacial isostatic adjustment, sediment loading, and soil compaction. The anthropogenic causes include groundwater extraction and oil and gas production.

As of 2005, approximately 40 million people were exposed to a 1 in 100-year coastal flooding hazard, and by 2070 this number will grow more than threefold. The value of property exposed to flooding will increase to about 9% of the projected global Gross Domestic Product, with the U.S., Japan, and the Netherlands being the countries with the most exposure. These exposure estimates often rely only on projections of global average sea level rise and do not account for vertical land motion.

The study measured the entire 1350-kilometer long coast of California from 2007-2018, compiling 1000s of satellite images over time, used for making a vertical land motion map with 35-million-pixel at ~80 m resolution, comprising a wide range of coastal uplift and subsidence rates. Coastal communities’ policymakers and the general public can freely download the data (link in supplemental data).

“The vast majority of the San Francisco Bay perimeter is undergoing subsidence with rates reaching 5.9 mm/year,” said Blackwell. “Notably, the San Francisco International Airport is subsiding with rates faster than 2.0 mm/year. The Monterey Bay Area, including the city of Santa Cruz, is rapidly sinking without any zones of uplift. Rates of subsidence for this area reach 8.7 mm/year. The Los Angeles area shows subsidence along small coastal zones, but most of the subsidence is occurring inland.”

Going forward in the decades ahead, the coastal population is expected to grow to over 1 billion people by 2050, due to coastward migration. The future flood risk that these communities will face is mainly controlled by the rate of relative sea-level rise, namely, the combination of sea-level rise and vertical land motion. It is vital to include land subsidence into regional projections that are used to identify areas of potential flooding for the urbanized coast.

Beyond the study, the ASU research team is hopeful that others in the scientific community can build on their results to measure and identify coastal hazards more broadly in the U.S. and around the world.