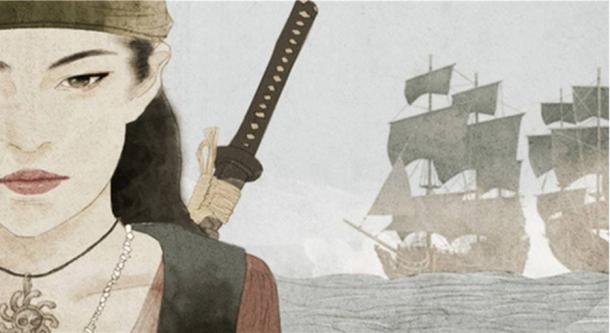 Ching Shih (or Zheng Shi) was a Chinese prostitute who became a powerful female pirate, controlling the infamous Red Flag Fleet. The fleet grew under her command, with expanding reserves of loot, and an organized system of business. Eventually, Ching Shih sought amnesty when offered by the Chinese government, but not without first negotiating to maintain the riches and power she earned as a pirate lord.

Little is known about Ching Shih’s early life. However it is known that she was born in the Guangdong province of China in 1775, and her birth name was ShiI Xiang Gu. She became a prostitute who worked in a floating brothel in Canton.

In 1801, Pirate Zhèng Yi, who commanded a fleet of ships called the “Red Flag Fleet,” noticed Ching Shih’s beauty, and wished to be with her. There are varying accounts of how they actually came to be together. According to some, Zhèng Yi sent a raid and ordered them to plunder the brothel. He asked that they bring him Ching Shih, his favorite prostitute. The men did as they were ordered, and Zhèng Yi and Ching Shih were married.

By other accounts, Zhèng Yi simply asked Ching Shih to marry him. She agreed to his proposal so long as she would have some power within his organization, and would receive an equal share of his plunder. While the accounts vary as to how they actually came to be together, Ching Shih and Zhèng Yi began to run the Red Flag Fleet together.