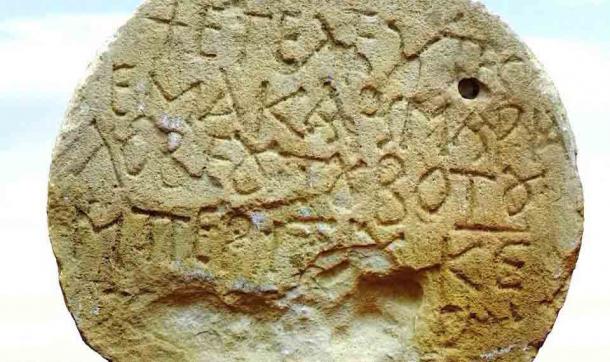 An ancient, inscribed Byzantine Greek stone has been discovered in Israel’s Negev desert with a rare Greek dedication to Maria, the Mother of God. The Byzantine Greek stone was found in Israel’s Nitzana National Park, located close to the Egyptian border. The Nitzana area is an important archaeological resource detailing the transitionary period from the Byzantine to the early Islamic period. It was on a hill topped by the towering remains of the ancient Nabatean city of Nitzana, that flourished during the Roman period, that archaeologists discovered the ancient Greek tombstone and the inscription reading, “Blessed Maria, who lived an immaculate life.”

According to a report in Haaretz the stone dates to the sixth or early seventh century AD. Tali Erickson-Gini is an archaeologist with the Israel Antiquities Authority (IAA) and in a statement he told the press that the settlement was first founded in the third century BC on a major Nabataean trade route. The Nabateans originally lived in the territory between Syria and Arabia and caravanned trade goods between Arabia and the Mediterranean. However, during the fifth and sixth centuries AD Nitzana served as a population center for all the villages and settlements in the vicinity.