A symbiotic culture of specialized yeast and bacteria can generate tough materials able to perform a variety of functions.

Engineers have developed a new way to generate tough, functional materials using a mix of bacteria and yeast similar to the “kombucha mother” used to ferment tea. 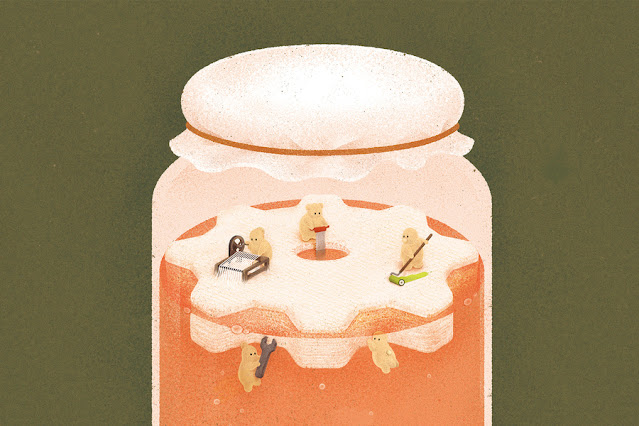 Using this mixture, also called a SCOBY (symbiotic culture of bacteria and yeast), the researchers were able to produce cellulose embedded with enzymes that can perform a variety of functions, such as sensing environmental pollutants. They also showed that they could incorporate yeast directly into the material, creating “living materials” that could be used to purify water or to make “smart” packaging materials that can detect damage.

“We foresee a future where diverse materials could be grown at home or in local production facilities, using biology rather than resource-intensive centralized manufacturing,” says Timothy Lu, an MIT associate professor of electrical engineering and computer science and of biological engineering.

Lu and Tom Ellis, a professor of bioengineering at Imperial College London, are the senior authors of the paper, which appears today in Nature Materials. The paper’s lead authors are MIT graduate student Tzu-Chieh Tang and Cambridge University postdoc Charlie Gilbert.

Several years ago, Lu’s lab developed a way to use E. coli to generate biofilms embedded with materials such as gold nanowires. However, those films are very small and thin, making them difficult to use in most large-scale applications. In the new study, the researchers set out to find a way to use microbes to generate larger quantities of more substantial materials.

They thought of creating a microbe population similar to a kombucha mother, which is a mixture of certain types of bacteria and yeast. These fermentation factories, which usually contain one species of bacteria and one or more yeast species, produce ethanol, cellulose, and acetic acid, which gives kombucha tea its distinctive flavor.

Using bacteria and yeast similar to those found in kombucha, MIT engineers can create “living materials.”

Most of the wild yeast strains used for fermentation are difficult to genetically modify, so the researchers replaced them with a strain of laboratory yeast called Saccharomyces cerevisiae. They combined the yeast with a type of bacteria called Komagataeibacter rhaeticus, which their collaborators at Imperial College London had previously isolated from a kombucha mother. This species can produce large quantities of cellulose.

Because the researchers used a laboratory strain of yeast, they could engineer the cells to do any of the things that lab yeast can do — for example, producing enzymes that glow in the dark, or sensing pollutants in the environment. The yeast can also be programmed so that they can break down pollutants after detecting them.

Researchers lift a sheet of their material, a tough cellulose that can be embedded with enzymes or living cells.

Meanwhile, the bacteria in the culture produce large-scale quantities of tough cellulose to serve as a scaffold. The researchers designed their system so that they can control whether the yeast themselves, or just the enzymes that they produce, are incorporated into the cellulose structure. It takes only a few days to grow the material, and if left long enough, it can thicken to occupy a space as large as a bathtub.

“We think this is a good system that is very cheap and very easy to make in very large quantities,” Tang says. “It’s at least a thousand times more material than the E.coli system.”

To demonstrate the potential of their microbe culture, which they call “Syn-SCOBY,” the researchers created a material incorporating yeast that senses estradiol, which is sometimes found as an environmental pollutant. In another version, they used a strain of yeast that produces a glowing protein called luciferase when exposed to blue light. These yeasts could be swapped out for other strains that detect other pollutants, metals, or pathogens.

The culture can be grown in normal yeast culture medium, which the researchers used for most of their studies, but they have also shown that it can grow in tea with sugar. The researchers envision that the cultures could be customized for people to use at home for growing water filters or other useful materials.

“Pretty much everyone can do this in their kitchen or at home,” Tang says. “You don’t have to be an expert. You just need sugar, you need tea to provide the nutrients, and you need a piece of Syn-SCOBY mother.”

The research was funded, in part, by the U.S. Army Research Office, the MIT Institute for Soldier Nanotechnologies, and the MIT-MISTI MIT-Imperial College London Seed Fund. Tang was supported by the MIT J-WAFS Fellowship.