Something lurks beneath the Arctic Ocean. While it’s not a monster, it has largely remained a mystery.

According to 25 international researchers who collaborated on a first-of-its-kind study, frozen land beneath rising sea levels currently traps 60 billion tons of methane and 560 billion tons of organic carbon. Little is known about the frozen sediment and soil — called submarine permafrost — even as it slowly thaws and releases methane and carbon that could have significant impacts on climate.

This artistic diagram of the subsea and coastal permafrost ecosystems emphasizes greenhouse gas production and release. Sandia National Laboratories geosciences engineer Jennifer Frederick is one of the authors in a recent study regarding the release of such gases from submarine permafrost. 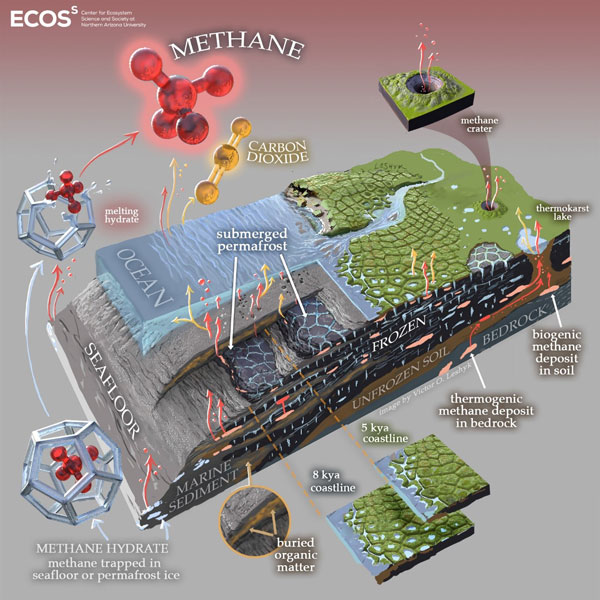 To put into perspective the amount of greenhouse gases in submarine permafrost, humans have released about 500 billion tons of carbon into the atmosphere since the Industrial Revolution, said Sandia National Laboratories geosciences engineer Jennifer Frederick, one of the authors on the study published in IOP Publishing journal Environmental Research Letters.

While researchers predict that submarine permafrost is not a ticking time bomb and could take hundreds of years to emit its greenhouse gases, Frederick said submarine permafrost carbon stock represents a potential giant ecosystem feedback to climate change not yet included in climate projections and agreements.

“It’s expected to be released over a long period of time, but it’s still a significant amount,” she said. “This expert assessment is bringing to light that we can’t just ignore it because it’s underwater, and we can’t see it. It’s lurking there, and it’s a potentially large source of carbon, particularly methane.”

The team of researchers led by Brigham Young University graduate student Sara Sayedi and senior researcher Ben Abbott compiled available articles and reports on the subject to create a base analysis of submarine permafrost’s potential to affect climate change. The study was coordinated through the Permafrost Carbon Network, which has more than 400 members from 130 research institutions in 21 countries.

The participating experts answered questions using their scientific skills, which could include modeling, data analysis or literature synthesis. Frederick, one of the original advocates of the study, has been modeling submarine permafrost for almost 10 years and answered the questions through the lens of her research, which is primarily in numerical modeling. She said she uses published material for model inputs or works directly with researchers who visit the Arctic and provide datasets.

Her work on the study was funded by the Laboratory Directed Research and Development program that enables Sandia scientists and engineers to explore innovative solutions to national security issues.

Frederick’s work aligned with Sandia’s Arctic Science and Security Initiative. For more than 20 years, the Labs have had a presence in northern Alaska, said Sandia atmospheric sciences manager Lori Parrott.

Working for the Department of Energy Office of Biological and Environmental Research, Sandia manages the Atmospheric Radiation Measurement user facility that collects atmospheric data continuously. Researchers measure and predict the speed of de-icing at the North Slope to help federal leaders make decisions on climate change and national security. In addition, Sandia creates accurate models for both sea and land ice and develops technologies for greenhouse gas monitoring. With more than 20 years of data, researchers can begin to decipher trends, Parrott said.

Permafrost study a reason to unite

Figure A shows the extent and carbon dynamics of the subsea permafrost domain versus the Last Glacial Maximum. Drawings B-D depict the thermal, physical and biogeochemical changes initiated in the subsea permafrost domain by deglaciation and sea level rise. Sandia National Laboratories geosciences engineer Jennifer Frederick is one of the authors in a recent study on submarine permafrost. 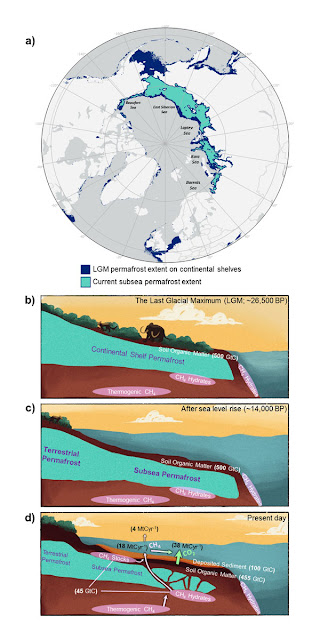 Artwork by Anna Wright, Brigham Young University
“I hope this study begins to unite the research community in submarine permafrost,” said Frederick. “Historically, it’s not only been a challenging location to do field work and make observations, but language barriers and other obstacles in accessibility to the existing observations and literature has challenged international scientific progress in this area.”

The team estimates that submarine permafrost has been thawing since the end of the last glacial period 14,000 years ago, and currently releases about 140 million tons of carbon dioxide and 5.3 million tons of methane into the atmosphere each year. This represents a small fraction of total human-caused greenhouse gas emissions per year, about the same yearly footprint as Spain, Sayedi said.

However, modern greenhouse gas releases are predominantly a result of the natural response to deglaciation, according to the study. Expert estimates from this study suggest human-caused global warming may accelerate greenhouse gas release, but due to lack of research and uncertainties in this area, determining causes and rates of the release will remain unknown until better empirical and modeling estimates are available.

“I’m optimistic that this study will shed light on the fact that submarine permafrost exists, and that people are studying its role in climate,” Frederick said. “The size of the research community doesn’t necessarily reflect its importance in the climate system.”

Almost every expert involved in the study mentioned the permafrost knowledge gap, which makes it harder for scientists to anticipate changes and reduces the reliability of estimates of carbon pools and fluxes, as well as the thermal and hydrological conditions of permafrost. Frederick said that while there is a wealth of ongoing research on terrestrial permafrost, submarine permafrost hasn’t been taken on like this before, and hasn’t been the subject of nearly as much international collaboration.

The amount of carbon sequestered or associated with submarine permafrost is relevant when compared to the numbers of carbon in terrestrial permafrost and what’s in the atmosphere today, Frederick said.

“This is an example of a very large source of carbon that hasn’t been considered in climate predictions or agreements,” she said. “While it’s not a ticking time bomb, what is certain is that submarine permafrost carbon stocks cannot continue to be ignored, and we need to know more about how they will affect the Earth’s future.”