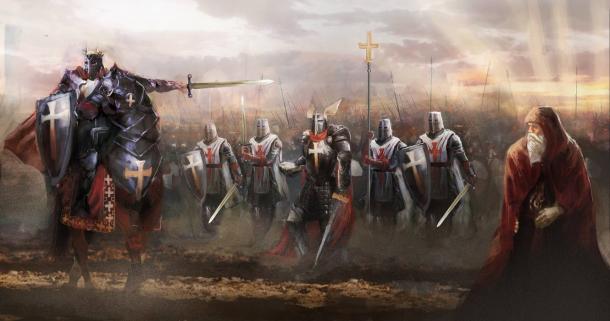 The Knights Templar initially arrived in the Holy Land on a mission to reclaim some treasure that they believed was rightfully theirs. According to the modern Templar historians, Tim Wallace-Murphy and Christopher Knight, the knights who banded together as the Knights Templar were part of a wave of European royalty descended from Jewish Elders that had fled the Holy Land around 70 AD, when it was invaded by the Romans.

Before leaving their homeland, these Elders had hidden their temple treasures and priceless Essene and Kabbalistic scrolls in strategic regions of the Holy Land so that the Roman invader Titus could not plunder them as the spoils of war. The Jewish Elders then immigrated to Europe. There, many of them married into the continent’s noble families. Of these Elders, twenty-four would become the patriarchs of a group of European families known by the sobriquet of the “Rex Deus” or “Star” families.

For hundreds of years the secret locations of the Jewish treasure filtered down through the families of the Elders – until the First Crusade, when knighted members of the Rex Deus joined the procession of holy warriors traveling east with the dual goal of defeating the Moslems and recovering their family treasure.