Over the course of Earth’s history, several mass extinction events have destroyed ecosystems, including one that famously wiped out the dinosaurs. But none were as devastating as “The Great Dying,” which took place 252 million years ago during the end of the Permian period. By characterizing how ancient life responded to environmental stressors, researchers gain insights into how modern species might fare.
The plant-eating pareiasaurs were preyed upon by sabre-toothed gorgonopsians. Both groups went extinct during The Great Dying. 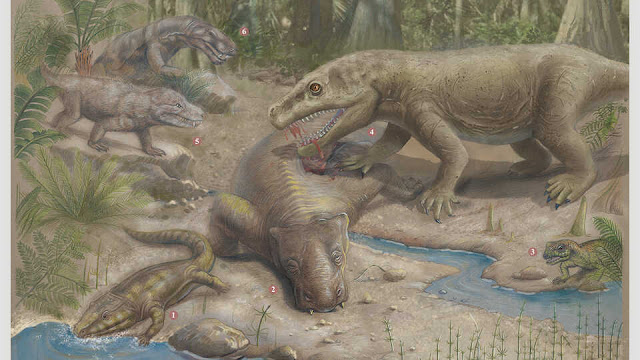 A new study, published today in Proceedings of the Royal Society B, shows in detail how life recovered in comparison to two smaller extinction events. The international study team—composed of researchers from the China University of Geosciences, the California Academy of Sciences, the University of Bristol, Missouri University of Science and Technology, and the Chinese Academy of Sciences—showed for the first time that the end-Permian mass extinction was harsher than other events due to a major collapse in diversity.

To better characterize “The Great Dying,” the team sought to understand why communities didn’t recover as quickly as other mass extinctions. The main reason was that the end-Permian crisis was much more severe than any other mass extinction, wiping out 19 out of every 20 species. With survival of only 5% of species, ecosystems had been destroyed, and this meant that ecological communities had to reassemble from scratch.

After The Great Dying, the ecosystem changed drastically, and included many Lystrosaurus. 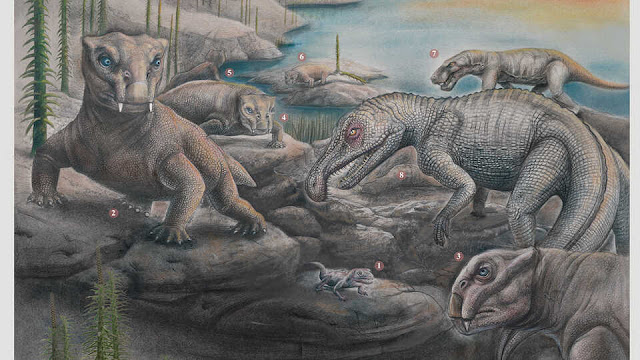 To investigate, lead author and Academy researcher Yuangeng Huang, now at the China University of Geosciences, Wuhan, reconstructed food webs for a series of 14 life assemblages spanning the Permian and Triassic periods. These assemblages, sampled from north China, offered a snapshot of how a single region on Earth responded to the crises. “By studying the fossils and evidence from their teeth, stomach contents, and excrement, I was able to identify who ate whom,” says Huang. “It’s important to build an accurate food web if we want to understand these ancient ecosystems.”

The food webs are made up of plants, molluscs, and insects living in ponds and rivers, as well as the fishes, amphibians, and reptiles that eat them. The reptiles range in size from that of modern lizards to half-ton herbivores with tiny heads, massive barrel-like bodies, and a protective covering of thick bony scales. Sabre-toothed gorgonopsians also roamed, some as large and powerful as lions and with long canine teeth for piercing thick skins. When these animals died out during the end-Permian mass extinction, nothing took their place, leaving unbalanced ecosystems for ten million years. Then, the first dinosaurs and mammals began to evolve in the Triassic. The first dinosaurs were small—bipedal insect-eaters about one meter long—but they soon became larger and diversified as flesh- and plant-eaters.

“Yuangeng Huang spent a year in my lab,” says Peter Roopnarine, Academy Curator of Geology. “He applied ecological modelling methods that allow us to look at ancient food webs and determine how stable or unstable they are. Essentially, the model disrupts the food web, knocking out species and testing for overall stability.”

By the end of the Permian, pareiasaurs had become large and armored for self-protection. This complex ecosystem collapsed during The Great Dying. 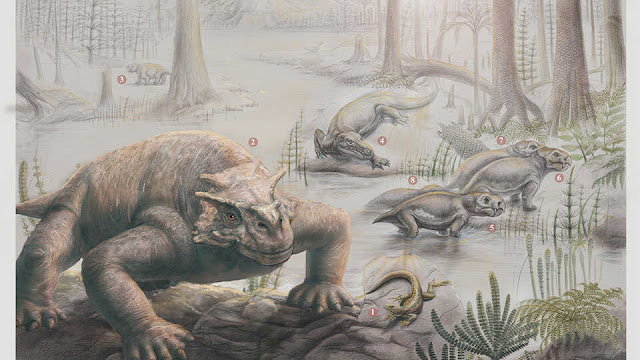 “We found that the end-Permian event was exceptional in two ways,” says Professor Mike Benton from the University of Bristol. “First, the collapse in diversity was much more severe, whereas in the other two mass extinctions there had been low-stability ecosystems before the final collapse. And second, it took a very long time for ecosystems to recover, maybe 10 million years or more, whereas recovery was rapid after the other two crises.”

Ultimately, characterizing communities—especially those that recovered successfully—provides valuable insights into how modern species might fare as humans push the planet to the brink.

“This is an amazing new result,” says Professor Zhong-Qiang Chen of the China University of Geosciences, Wuhan. “Until now, we could describe the food webs, but we couldn’t test their stability. The combination of great new data from long rock sections in north China with cutting-edge computational methods allows us to get inside these ancient examples in the same way we can study food webs in the modern world.”