A long-lost ice core provides direct evidence that giant ice sheet melted off within the last million years and is highly vulnerable to a warming climate, PNAS study shows

Most of Greenland is covered with ice today. But a new study shows that within the last million years it melted off and became covered with green tundra, perhaps like this view of eastern Greenland, near the ocean. The research provides strong evidence that Greenland is more sensitive to climate change than previously understood—and at risk of irreversibly melting. 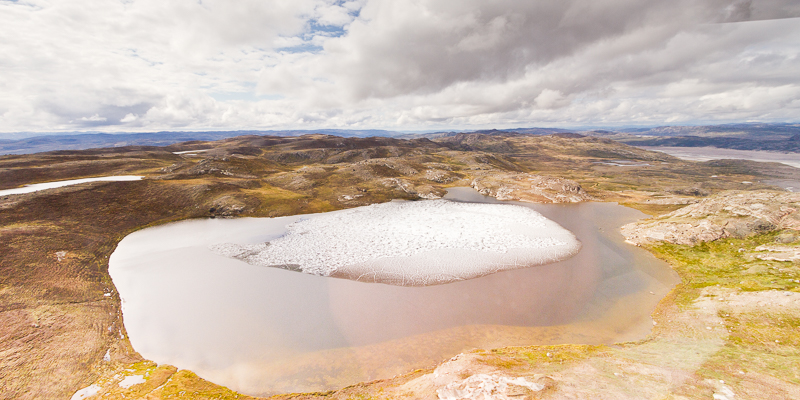 In 1966, US Army scientists drilled down through nearly a mile of ice in northwestern Greenland—and pulled up a fifteen-foot-long tube of dirt from the bottom. Then this frozen sediment was lost in a freezer for decades. It was accidentally rediscovered in 2017.

In 2019, University of Vermont scientist Andrew Christ looked at it through his microscope—and couldn’t believe what he was seeing: twigs and leaves instead of just sand and rock. That suggested that the ice was gone in the recent geologic past—and that a vegetated landscape, perhaps a boreal forest, stood where a mile-deep ice sheet as big as Alaska stands today.

Over the last year, Christ and an international team of scientists—led by Paul Bierman at UVM, Joerg Schaefer at Columbia University and Dorthe Dahl-Jensen at the University of Copenhagen—have studied these one-of-a-kind fossil plants and sediment from the bottom of Greenland. Their results show that most, or all, of Greenland must have been ice-free within the last million years, perhaps even the last few hundred-thousand years.

“Ice sheets typically pulverize and destroy everything in their path,” says Christ, “but what we discovered was delicate plant structures—perfectly preserved. They’re fossils, but they look like they died yesterday. It’s a time capsule of what used to live on Greenland that we wouldn’t be able to find anywhere else.”

The discovery helps confirm a new and troubling understanding that the Greenland ice has melted off entirely during recent warm periods in Earth’s history—periods like the one we are now creating with human-caused climate change.

In this video, Paul Bierman explains the urgent significance of this new study:
Credit: University of Vermont

Understanding the Greenland Ice Sheet in the past is critical for predicting how it will respond to climate warming in the future and how quickly it will melt. Since some twenty feet of sea-level rise is tied up in Greenland’s ice, every coastal city in the world is at risk. The new study provides the strongest evidence yet that Greenland is more fragile and sensitive to climate change than previously understood—and at grave risk of irreversibly melting off.

“This is not a twenty-generation problem,” says Paul Bierman, a geoscientist at UVM in the College of Arts & Sciences, Rubenstein School of Environment & Natural Resources, and fellow in the Gund Institute for Environment. “This is an urgent problem for the next 50 years.”

The new research was published March 15 in the Proceedings of the National Academy of Sciences.

The material for the new PNAS study came from Camp Century, a Cold War military base dug inside the ice sheet far above the Arctic Circle in the 1960s. The real purpose of the camp was a super-secret effort, called Project Iceworm, to hide 600 nuclear missiles under the ice close to the Soviet Union. As cover, the Army presented the camp as a polar science station.
The military mission failed, but the science team did complete important research, including drilling a 4560-foot-deep ice core. The Camp Century scientists were focused on the ice itself—part of the burgeoning effort at the time to understand the deep history of Earth’s ice ages. They, apparently, took less interest in a bit of dirt gathered from beneath the ice core. Then, in a truly cinematic set of strange plot twists, the ice core was moved from an Army freezer to the University of Buffalo in the 1970s, to another freezer in Copenhagen, Denmark, in the 1990s, where it languished for decades—until it surfaced when the cores were being moved to a new freezer. 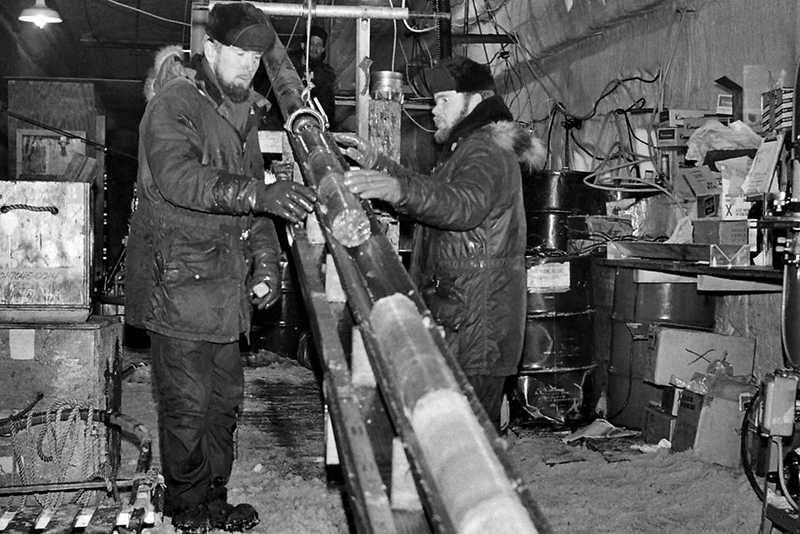 More about how the core was lost, rediscovered in some cookie jars, and then studied by an international team gathered at the University of Vermont in 2019 can be read here: Secrets Under the Ice.

For much of the Pleistocene—the icy period covering the last 2.6 million years—portions of the ice on Greenland persisted even during warmer spells called “interglacials.” But most of this general story has been pieced together from indirect evidence in mud and rock that washed off the island and was gathered by offshore ocean drilling. The extent of Greenland’s ice sheet and what kinds of ecosystems existed there before the last interglacial warm period—that ended about 120,000 years ago—have been hotly debated and poorly understood.

The new study makes clear that the deep ice at Camp Century—some 75 miles inland from the coast and only 800 miles from the North Pole—entirely melted at least once within the last million years and was covered with vegetation, including moss and perhaps trees. The new research, supported by the National Science Foundation, lines up with data from two other ice cores from the center of Greenland, collected in 1990s. Sediment from the bottom of these cores also indicate that the ice sheet was gone for some time in the recent geologic past. The combination of these cores from the center of Greenland with the new insight from Camp Century in the far northwest give researchers an unprecedented view of the shifting fate of the entire Greenland ice sheet.

The team of scientists used a series of advanced analytical techniques—none of which were available to researchers fifty years ago—to probe the sediment, fossils, and the waxy coating of leaves found at the bottom of the Camp Century ice core. For example, they measured ratios of rare forms—isotopes—of both aluminum and the element beryllium that form in quartz only when the ground is exposed to the sky and can be hit by cosmic rays. These ratios gave the scientists a window onto how long rocks at the surface were exposed vs. buried under layers of ice. This analysis gives the scientists a kind of clock for measuring what was happening on Greenland in the past. Another test used rare forms of oxygen, found in the ice within the sediment, to reveal that precipitation must have fallen at much lower elevations than the height of the current ice sheet, “demonstrating ice sheet absence,” the team writes. Combining these techniques with studies of luminescence that estimate the amount of time since sediment was exposed to light, radiocarbon-dating of bits of wood in the ice, and analysis of how layers of ice and debris were arranged—allowed the team to be clear that most, if not all, of Greenland melted at least once during the past million years—making Greenland green with moss and lichen, and perhaps with spruce and fir trees.

And the new study shows that ecosystems of the past were not scoured into oblivion by ages of glaciers and ice sheets bulldozing overtop. Instead, the story of these living landscapes remains captured under the relatively young ice that formed on top of the ground, frozen in place, and holds them still.

In a 1960’s movie about Camp Century created by the Army, the narrator notes that “more than ninety percent of Greenland is permanently frozen under a polar ice cap.” This new study makes clear that it’s not as permanent as we once thought. “Our study shows that Greenland is much more sensitive to natural climate warming than we used to think—and we already know that humanity’s out-of-control warming of the planet hugely exceeds the natural rate,” says Christ, a postdoctoral researcher in the College of Arts & Sciences and Gund Institute.

“Greenland may seem far away,” says UVM’s Paul Bierman, “but it can quickly melt, pouring enough into the oceans that New York, Miami, Dhaka—pick your city—will go underwater.”