Produced in a sustainable way, synthetic fuels contribute to switching mobility to renewable energy and to achieving the climate goals in road traffic. In Empa’s mobility demonstrator, move, researchers are investigating the production of synthetic methane from an energy, technical and economic perspective – a project with global potential.

By 2030, the retailer Lidl Switzerland will switch from fossil natural gas to liquefied renewable gas to operate its trucks. 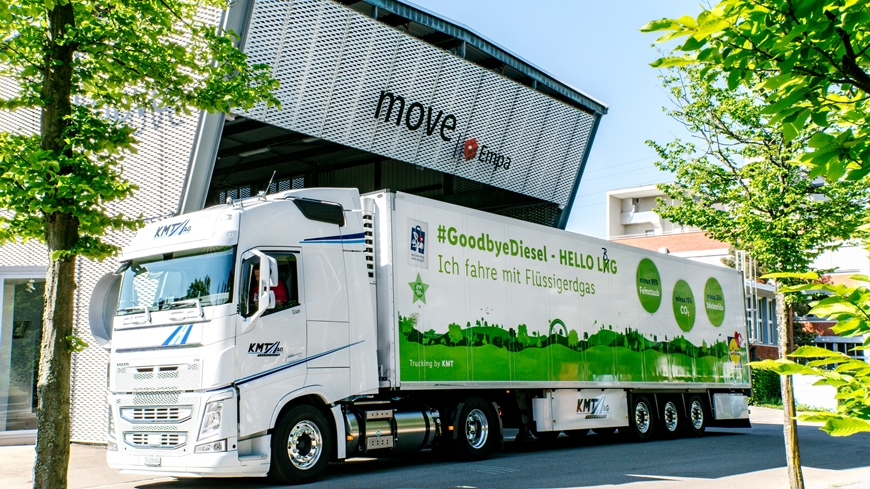 Mobility analyses show: Only a small proportion of all vehicles are responsible for the majority of the kilometers driven. We are talking above all about long-distance trucks that transport goods all over Europe. If these continue to be fueled with fossil energy, it will hardly be possible to sufficiently reduce CO2 emissions in road traffic. Synthetic fuels can make a significant contribution to such applications.

With electric mobility, hydrogen mobility and synthetic fuels, Empa’s future mobility demonstrator, “move”, is investigating three paths for CO2 reduction in road traffic against the background of a rapidly changing energy system. “All these concepts have advantages and drawbacks in terms of energy, operation and economics. In order to use them in a smart way, we need a deeper understanding of the overall system,” says Christian Bach, Head of Empa’s Automotive Powertrain Technologies lab. “Together with our ‘move’ partners, we are working to develop knowledge that can be put into practice.”

The latest project focuses on the production of synthetic methane from hydrogen and CO2 – the so-called methanization. Such fuels, produced synthetically with renewable energy – thus called synfuel or syngas –, can be transported via conventional routes and made available through the existing infrastructure. This is of interest for Switzerland as well as globally, because it opens up an enormous potential for renewable energy. A methanization process developed at Empa

The basic chemical process of methanization has been known for over 100 years as the Sabatier reaction. In “move”, another process developed further at Empa will be used: the so-called sorption-enhanced methanization. Empa researchers hope that this novel process engineering concept will lead to simpler process control, higher efficiency and better suitability for dynamic operation.

Methanization works as follows: Methane (CH4) and water (H2O) are produced by catalytic conversion from carbon dioxide (CO2) and hydrogen (H2). The water is causing problems with conventional processes, however: To remove it, serial methanization stages are typically required – with condensation areas in between. Due to the high reaction temperatures, a proportion of the water is converted back into hydrogen by the so-called water-gas shift reaction. The gaseous product of the methanization reaction thus contains a few percent hydrogen, which prevents direct feeding into the gas grid; the hydrogen must first be removed.

Carbon dioxide and water from the air

CO2 for the methanization as well as water for hydrogen production is taken directly from the atmosphere with a CO2 collector from the ETH spin-off Climeworks. The system sucks in ambient air and CO2 molecules remain attached to the filter. Using heat – around 100°C – the CO2 molecules can be released from the filter. Empa researchers see further potential for optimization in the heat required for this CO2 desorption. “Both hydrogen production and methanization continuously generate waste heat,” says Bach. “By means of a clever heat management, we want to cover the heat requirements of the CO2 collector as much as possible with this waste heat”. In addition to CO2, the Climeworks plant also extracts water from ambient air, which is used for hydrogen production in the electrolysis device. This means that such plants are also conceivable in regions without water supply, for example in deserts (see box).

In addition to new knowledge about technical and energetic aspects, insights about the economic efficiency of synthetic methane are one of the project’s prime goals. “In order to ensure this holistic perspective, the project consortium consists of partners who cover the entire value chain – from Empa researchers to energy suppliers, filling station and fleet operators and industrial partners in the technology and plant sectors,” says Brigitte Buchmann, member of Empa’s Board of Directors and strategic head of “move”. The project is supported by the Canton of Zurich, the ETH Board, Avenergy Suisse, Migros, Lidl Switzerland, Glattwerk, Armasuisse and Swisspower.

Currently, Christian Bach’s team is concentrating on the investigation of water adsorption on porous materials and the process control of the catalytic reaction. Construction of the plant is planned for mid-2021. “About a year later, we want to refuel the first vehicle,” says Buchmann. “With methane from solar energy.”

Synthetic fuels from the desert?
When converting our energy system to renewable sources, there is a major challenge: Renewable sources such as sun or wind are not always available everywhere. In winter we have too little renewable energy, in summer there is too much – in the northern hemisphere. In the southern hemisphere it is the other way round. But there are also areas with almost continuous sunshine – the so-called sun belt, in which the large deserts of the Earth are located. “From a global perspective, we do not have too little renewable energy worldwide, but “merely” an energy transport problem,” says Christian Bach. Synthetic energy carriers could help solve this problem.

Smaller plants in Switzerland can make a valuable contribution to the national energy system by harnessing surplus summer electricity and connecting different energy sectors. However, large plants could exploit their full potential above all in the Earth’s sunbelt. This is illustrated by a simple calculation: In order to cover Switzerland’s energy needs during winter not covered by hydropower as well as all long-distance domestic traffic exclusively with (imported) synthetic energy sources, a solar power plant would be required in a desert with an area of approximately 700 km2; that is 27 x 27 km or, in other words, 0.008% of the area of the Sahara. The water and CO2 needed for production could be extracted locally from the atmosphere. “Existing trade mechanisms, transport infrastructures, standards and expertise could simply be used further,” says Bach. So could the plant in “move” soon be a model for a gigawatt plant in the desert?