Honor desperately wants to step out from the lingering shadow of its former parent, Huawei. In its effort to demonstrate it is indeed its own company, Honor is summoning all of its comparatively meager resources and swinging for the fences. The Honor Magic Vs is its second foldable phone but the first that will see a global launch and after spending a few hours with it, I have to admit, it looks pretty good. 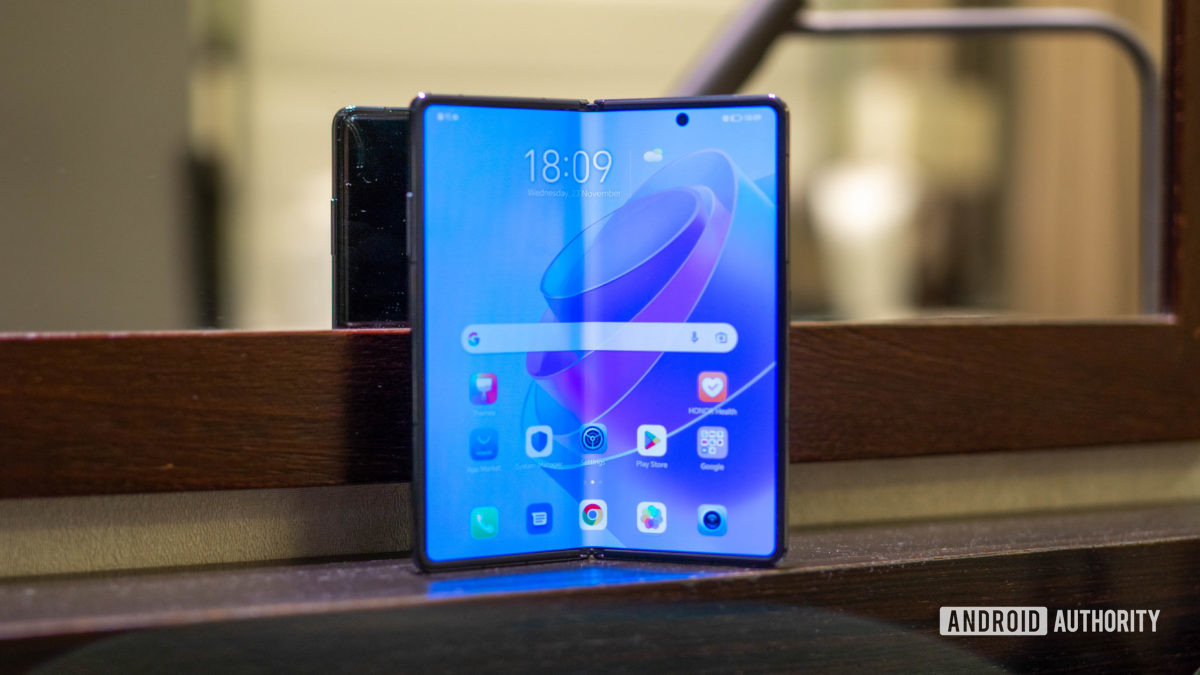 At first glance, it’s tempting to think of the Mate Vs as the Honor version of 2021’s Huawei Mate X2. But it’s more like an Honor version of what could be a Mate X3. That’s because the Magic Vs adds further polish to the formula — it’s thinner and lighter than the Huawei Mate X2 but still comes with a ~10% bigger battery.

Unlike Huawei, Honor’s foldable has ready access to the Google Play Store and Google Mobile Services.

Huawei has, of course, since come out with the Mate Xs 2 which is even more svelte than even the Magic Vs, but it too comes with a smaller battery and features the Xs line’s controversial outward-folding design. On paper, Honor has bested both of Hauwei’s formidable current foldables and it has something Huawei phones can only dream of in 2022: ready access to all the apps on the Google Play Store and support for Google Mobile Services.

Comparing the Magic Vs to the even more recent Galaxy Z Fold 4 for a moment, Honor leads on paper here too. The Magic Vs is marginally lighter, significantly thinner, and has a much larger battery than Samsung’s flagship foldable.

Given Samsung’s economies of scale, it’s hard to say if Honor will be able to undercut Samsung on price but when the Galaxy Z Fold 4 retails for $1,799 and the Chinese price conversion puts the Magic Vs at just over $1,000, you never know. Whatever Honor prices it at, the Magic Vs looks like it could be a viable Samsung foldable alternative that you can actually buy outside of Asia — that’s something we’ve been needing for a while. 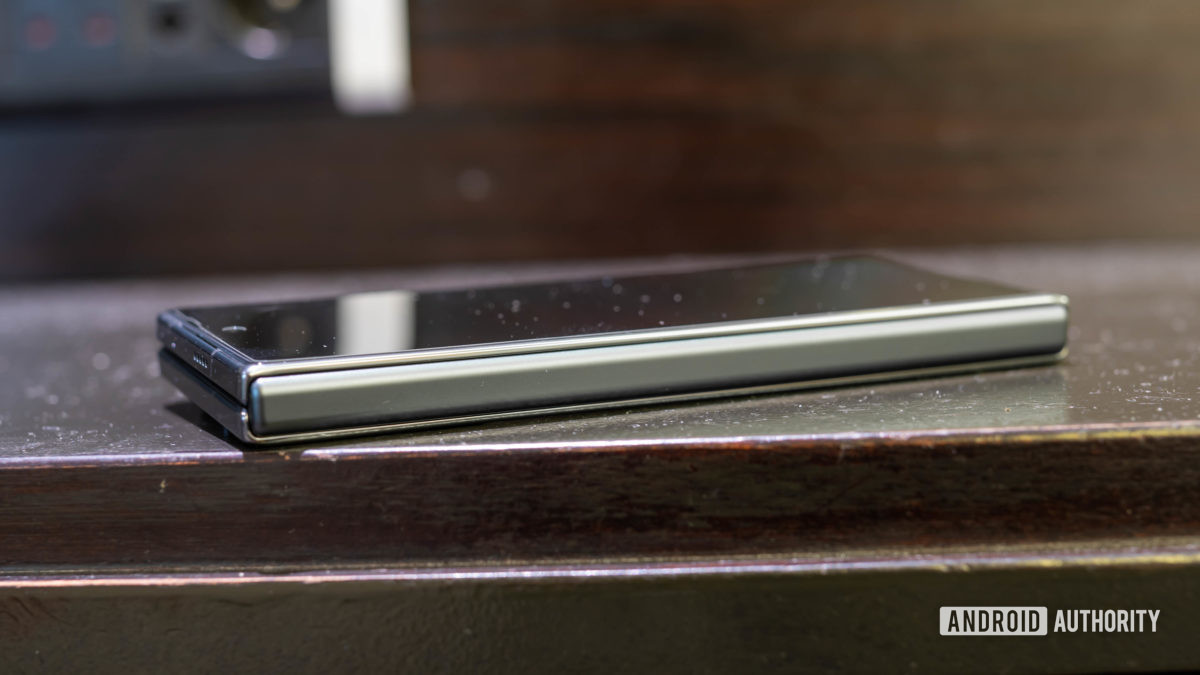 Let’s talk about the phone itself. Its design is very reminiscent of the original Magic V which was itself reminiscent of most Huawei phones. You’ve got the same fold-flat design with a hinge that retreats into the housing of the chassis when opened. A side-mounted fingerprint scanner doubles as the power button. The internal display also supports the Honor Magic Pen stylus but it is not included, nor is there anywhere to dock in on the device itself.

The first thing you notice when you pick the Honor Magic Vs up is just how light it is.

The first thing you notice when you pick it up is just how light it is. The more you use it the more you notice the lack of overall bulk usually associated with foldables. Honor wants this to be the first “everyday” foldable, usable throughout the day rather than as a secondary phone. Apparently, more than half the people Honor surveyed with a foldable phone also carry another normal phone.

Perhaps Honor’s biggest innovation here is the hinge. The Magic Vs has a “gearless hinge” which was described to us as functioning similarly to how a door hinge works. From the 92-component hinge in the original Magic V, the Magic Vs features just four hinge elements while retaining the same rigidity and durability. It not only allows the phone to be lighter but also means there’s more internal space for cameras and the battery.

Honor says the new hinge is rated for 400,000 opens or 10+ years’ worth of 100 opens per day. That figure is for the hinge itself and shouldn’t be confused with the display rating (which Honor isn’t sharing for now). For reference, Samsung rates its Galaxy Z Fold 4 display for 200,000 opens. So while the Magic Vs hinge may last you ten years you’re not likely to get that much use out of the original display without a replacement somewhere along the line. Speaking of the display, the Honor Magic Vs packs a variable 120Hz 6.45-inch OLED on the outside in a 21:9 aspect ratio and a square-ish variable 90Hz 7.9-inch OLED on the inside. It’s a bit of a shame that the interior screen doesn’t match the outside’s 120Hz refresh rate like the Galaxy Z Fold 4.

All panels feature 1920Hz pulse width modulation (PWM) dimming to reduce screen flickering and Honor’s Circadian Night Display for limiting blue light. Dynamic dimming promises to adjust the brightness to minimize eye strain throughout the day. If you need additional outdoor brightness, however, the Magic Vs can reach up to 1,200 nits of peak brightness.

There’s a punch-hole camera on the right-hand side of the internal screen for video calls, or you can make use of the main cameras for selfies using the external display as a viewfinder — something that remains one of my favorite use cases for foldable phones.

On the back, the main camera array is pretty impressive looking on paper. There’s a main 54MP Sony IMX800 sensor for regular 1x shooting at f/1.9 aperture. There’s also a 50MP ultrawide at f/2.0 with a macro mode, and an 8MP 3x optical zoom lens. On the front, there’s a second 16MP camera for taking selfies when the phone is folded. All cameras feature the AI-enabled Honor Image Engine. We’re looking forward to testing the cameras out against the competition. A beefy 5,000mAh battery powers the show with 66W fast wired charging. Honor says it only takes 46 minutes to hit 100% charge. There’s no wireless charging here unfortunately but, personally, I’d always take fast wired charging over a slow wireless option. For reference, the Galaxy Z Fold 4 charges with a cable at 25W and wirelessly at 15W.

With 66W wired charing it only takes 46 minutes to charge the Magic Vs’ 5,000mAh battery to full.

As for software, the Magic Vs runs Magic OS 7.0, which is based on Android 12. I can’t tell you anything more than that unfortunately as the unit I was given access to was hardware-only, meaning the global software on it is not yet finished. As such, it’d be unfair to comment on it without getting our hands on a model with retail software.

The Magic Vs is powered by the Qualcomm Snapdragon 8 Plus Gen 1 mobile platform and comes in several memory configurations. There’s a base model with 8GB of RAM and 256GB of storage and a 12GB/256GB or 12GB/512GB version. Colors for the standard models include Cyan, Black, and Orange. There’ll also be a Magic Vs Ultimate edition with Black and Gold color options and 16GB/512GB if you really want to max everything out. There’s currently no global pricing but the Chinese price looks promising so far, especially considering Honor has seriously undercut the Chinese pricing for the first Magic V (which started at 8,999 yuan). Chinese availability begins November 23, 2022, starting at 7,499 yuan (~$1,049) for the base model and up to 10,888 yuan (~$1,523) for the special edition.

I doubt the Magic Vs will only be a thousand-dollar phone when it hits Western markets (albeit not the US) considering the Magic 4 Pro retailed at €1,099. We’ll just have to wait and see how aggressive Honor can afford to be.

Honor has confirmed the Magic Vs will get a global launch in Q1 2023, but I wouldn’t be surprised to see an announcement made in January with availability a few weeks later. In this economy, no one can afford to wait too long to hit shelves and Huawei will likely have its Mate X3 coming at MWC 2023. After spending a little time with the Magic Vs (and having briefly used the Magic V before it) I can confidently say that if you’ve been missing Huawei on the global stage you should probably shift your attention to Honor.

On the surface, Honor appears to have retained all the best parts of its time under Huawei (great build quality, excellent engineers) but now finds itself free from the worst parts. Releasing a foldable in global markets early next year will be a huge step for the brand.