NASA has big plans for returning astronauts to the Moon in 2024, a stepping stone on the path to sending humans to Mars. But where should the first people on the Red Planet land?

A new paper published in Geophysical Research Letters will help by providing a map of water ice believed to be as little as an inch (2.5 centimeters) below the surface.

Water ice will be a key consideration for any potential landing site. With little room to spare aboard a spacecraft, any human missions to Mars will have to harvest what’s already available for drinking water and making rocket fuel.The annotated area of Mars in this illustration holds near-surface water ice that would be easily accessible for astronauts to dig up. The water ice was identified as part of a map using data from NASA orbiters.

NASA calls this concept “in situ resource utilization,” and it’s an important factor in selecting human landing sites on Mars. Satellites orbiting Mars are essential in helping scientists determine the best places for building the first Martian research station. The authors of the new paper make use of data from two of those spacecraft, NASA’s Mars Reconnaissance Orbiter (MRO) and Mars Odyssey orbiter, to locate water ice that could potentially be within reach of astronauts on the Red Planet.

“You wouldn’t need a backhoe to dig up this ice. You could use a shovel,” said the paper’s lead author, Sylvain Piqueux of NASA’s Jet Propulsion Laboratory in Pasadena, California. “We’re continuing to collect data on buried ice on Mars, zeroing in on the best places for astronauts to land.”

Liquid water can’t last in the thin air of Mars; with so little air pressure, it evaporates from a solid to a gas when exposed to the atmosphere.

Martian water ice is locked away underground throughout the planet’s mid-latitudes. These regions near the poles have been studied by NASA’s Phoenix lander, which scraped up ice, and MRO, which has taken many images from space of meteor impacts that have excavated this ice. To find ice that astronauts could easily dig up, the study’s authors relied on two heat-sensitive instruments: MRO’s Mars Climate Sounder and the Thermal Emission Imaging System (THEMIS) camera on Mars Odyssey. 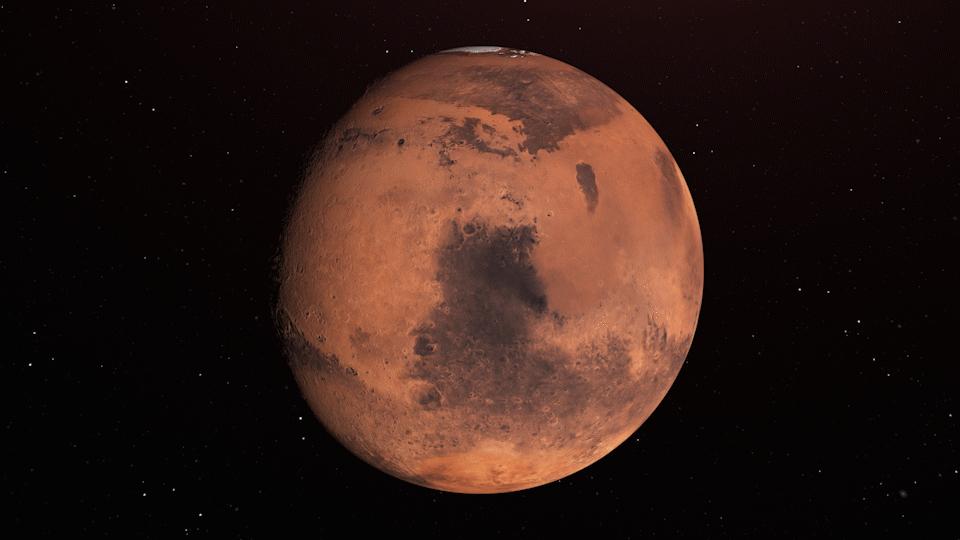 Why use heat-sensitive instruments when looking for ice? Buried water ice changes the temperature of the Martian surface. The study’s authors cross-referenced temperatures suggestive of ice with other data, such as reservoirs of ice detected by radar or seen after meteor impacts. Data from Odyssey’s Gamma Ray Spectrometer, which is tailor-made for mapping water ice deposits, were also useful.

As expected, all these data suggest a trove of water ice throughout the Martian poles and mid-latitudes. But the map reveals particularly shallow deposits that future mission planners may want to study further.

While there are lots of places on Mars scientists would like to visit, few would make practical landing sites for astronauts. Most scientists have homed in on the northern and southern mid-latitudes, which have more plentiful sunlight and warmer temperatures than the poles. But there’s a heavy preference for landing in the northern hemisphere, which is generally lower in elevation and provides more atmosphere to slow a landing spacecraft.

This rainbow-colored map shows underground water ice on Mars. Cool colors are closer to the surface than warm colors; black zones indicate areas where a spacecraft would sink into fine dust; the outlined box represents the ideal region to send astronauts for them to dig up water ice.

A large portion of a region called Arcadia Planitia is the most tempting target in the northern hemisphere. The map shows lots of blue and purple in this region, representing water ice less than one foot (30 centimeters) below the surface; warm colors are over two feet (60 centimeters) deep. Sprawling black zones on the map represent areas where a landing spacecraft would sink into fine dust.

Piqueux is planning a comprehensive campaign to continue studying buried ice across different seasons, watching how the abundance of this resource changes over time.

The more we look for near-surface ice, the more we find,” said MRO Deputy Project Scientist Leslie Tamppari of JPL. “Observing Mars with multiple spacecraft over the course of years continues to provide us with new ways of discovering this ice.”