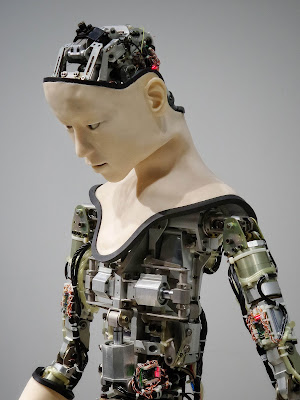 I’ve discussed the idea that any aliens we meet someday may be machine-based artificial intelligence (AI). Paul Davies was one of the first astrophysicists to suggest the concept, although science fiction has been mining the idea for many decades. The reasoning is simple: machine-based intelligence is a lot more durable than a biological being, and easier to repair and reproduce. Humans are currently moving towards machine assisted living. Heart pumps and cochlear implants are just two basic examples. Computer interfaces with the brain are being tested. Davies points out that the development of machine assisted human biology is likely to continue. Eventually, we will reach a point where the human body is more machine than biological.
Philosophy professor Susan Schneider takes that idea a step further. In a presentation to a NASA conference, she suggested that aliens would likely be a highly developed form of artificial intelligence: a superintelligence. This is how Nick Bostrom with the University of Oxford defines it: “By a “superintelligence” we mean an intellect that is much smarter than the best human brains in practically every field, including scientific creativity, general wisdom and social skills. This definition leaves open how the superintelligence is implemented: it could be a digital computer, an ensemble of networked computers, cultured cortical tissue or what have you. It also leaves open whether the superintelligence is conscious and has subjective experiences.”
It may sound like an esoteric point to discuss superintelligence when any alien artificial intelligence would likely be much more intelligent than humans, just by existing. However, Schneider examines the difference between human thought and the workings of a superintelligence to tackle some important issues in the consideration of extraterrestrial First Contact.
One primary point in her paper is the issue of consciousness. Could a superintelligence be conscious? Consider the ramifications- the further an alien intelligence is from our biological state, the wider the gulf between us in terms of understanding, if we meet someday. Consciousness defines the human experience in many respects. We are a product of our interaction with our reality, in both physical and mental dimensions. Superintelligence could be so different from human intelligence that finding common ground between the two would be difficult. Schneider brings up an interesting possibility, once again relying on Nick Bostrom for the foundational idea- what if artificial intelligence is engineered to be like the intelligence of the biological originator? Humans are doing this currently as we design our own artificial intelligence. Many researchers are using the human brain and human attributes as a model for AI. Thus, the finished product would operate in a manner consistent with human intelligence. If we’re doing it, it seems quite possible biological aliens would have followed the same process. Why? Dr. Schneider brings up the concept of self-preservation. Many humans are uncomfortable designing AI that would eventually replace us. By designing AI with human thought patterns, we would be preserving part of who we are, even if the biological parts are eventually left behind. If aliens did the same, we could eventually meet a biologically-inspired superintelligent alien (BISA). That sounds daunting, so we probably need to consider the commonalities we still may have. Schneider examines the Bostrom Instrumental Convergence Thesis: “Several instrumental values can be identified which are convergent in the sense that their attainment would increase the chances of the agent’s goal being realized for a wide range of final goals and a wide range of situations, implying that these instrumental values are likely to be pursued by a broad spectrum of situated intelligent agents.”
Bostrom identifies these areas of commonality: “Resource acquisition, technological perfection, cognitive enhancement, self-preservation and goal content integrity (i.e., that a superintelligent being’s future self will pursue and attain those same goals).”
This states that alien AI, whether it be entirely artificial or BSIA in nature, will have a set of behaviors that we could recognize. That could provide a basis for understanding.
You can see why I’ve included Nick Bostrom and his Future of Humanity Institute as one of the important experts to consult with in the wake of First Contact. He has been discussing such issues for more than 20 years. I will add Susan Schneider to that list.  Applying these superintelligence concepts directly to extraterrestrials could be an important facet of First Contact.
Photo by Franck V. on Unsplash