It is well known that the expansion of the universe is accelerating due to a mysterious dark energy. Within galaxies, stars also experience an acceleration, though this is due to some combination of dark matter and the stellar density.

The ripples in the Milky Way disk are shown, along with the tidal debris from the Sagittarius dwarf galaxy. The pulsars analyzed by Chakrabarti and collaborators to calculate galactic accelerations are shown in the inset. 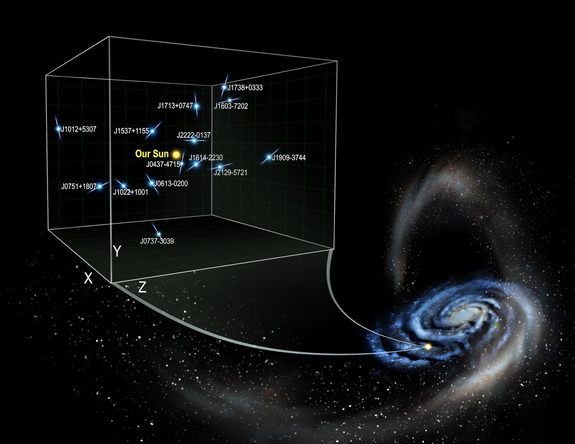 Credit: IAS; Dana Berry
In a new study to be published in Astrophysical Journal Letters, researchers have now obtained the first direct measurement of the average acceleration taking place within our home galaxy, the Milky Way. Led by Sukanya Chakrabarti at the Institute for Advanced Study, with collaborators from Rochester Institute of Technology, University of Rochester, and University of Wisconsin-Milwaukee, the team used pulsar data to clock the radial and vertical accelerations of stars within and outside of the galactic plane. Based on these new high-precision measurements and the known amount of visible matter in the galaxy, researchers were then able to calculate the Milky Way’s dark matter density without making the usual assumption that the galaxy is in a steady state.

“Our analysis not only gives us the first measurement of the tiny accelerations experienced by stars in the galaxy, but also opens up the possibility of extending this work to understand the nature of dark matter, and ultimately dark energy on larger scales,” stated Chakrabarti, the paper’s lead author and a current Member and IBM Einstein Fellow at the Institute for Advanced Study.

Stars hurtle through the galaxy at hundreds of kilometers per second, yet this study indicates that the change in their velocities is occurring at a literal snail’s pace—a few centimeters per second, which is about the same speed as a crawling baby. To detect this subtle motion the research team relied on the ultraprecise time-keeping ability of pulsars that are widely distributed throughout the galactic plane and halo—a diffuse spherical region that surrounds the galaxy.

“By exploiting the unique properties of pulsars, we were able to measure very small accelerations in the galaxy. Our work opens a new window in galactic dynamics,” said co-author Philip Chang of the University of Wisconsin-Milwaukee.

Extending outwards approximately 300,000 light years from the galactic center, the halo may provide important hints to understanding dark matter, which accounts for about 90 percent of the galaxy’s mass and is highly concentrated above and below the star-dense galactic plane. Stellar motion in this particular region—a primary focus of this study—can be influenced by dark matter. Utilizing the local density measurements obtained through this study, researchers will now have a better idea of how and where to look for dark matter.

While previous studies assumed a state of galactic equilibrium to calculate average mass density, this research is based on the natural, non-equilibrium state of the galaxy. One might analogize this to the difference between the surface of a pond before and after a stone is tossed in. By accounting for the “ripples” the team was able to obtain a more accurate picture of reality. Though in this case, rather than stones, the Milky Way is influenced by a turbulent history of galactic mergers and continues to be perturbed by external dwarf galaxies like the Small and Large Magellanic Clouds. As a result, stars do not have flat orbits and tend to follow a path similar to that of a warped vinyl record, crossing above and below the galactic plane. One of the key factors that enabled this direct observational approach was the use of pulsar data compiled from international collaborations, including NANOGrav (North American Nanohertz Observatory for Gravitational Waves) that has obtained data from the Green Bank and Arecibo telescopes.

“For centuries astronomers have measured the positions and speeds of stars, but these provide only a snapshot of the complex dynamical behavior of the Milky Way galaxy,” stated Scott Tremaine, Professor Emeritus at the Institute for Advanced Study. “The accelerations measured by Chakrabarti and her collaborators are directly caused by the gravitational forces from the matter in the galaxy, both visible and dark, and thereby provide a new and promising window on the distribution and the composition of the matter in the galaxy and the universe.”

This particular paper will enable a wide variety of future studies. Accurate measurements of accelerations will also soon be possible using the complementary radial velocity method that Chakrabarti developed earlier this year, which measures the change in the velocity of stars with high precision. This work will also enable more detailed simulations of the Milky Way, improve constraints on general relativity, and provide clues in the search for dark matter. Extensions of this method may ultimately allow us to directly measure the cosmic acceleration as well.

While a direct picture of our home galaxy—similar to the ones of Earth taken by the Apollo astronauts—is not yet possible, this study has provided essential new details to help envision the dynamic organization of the galaxy from within.

About the Institute
The Institute for Advanced Study is one of the world’s foremost centers for theoretical research and intellectual inquiry. Located in Princeton, N.J., the IAS is dedicated to independent study across the sciences and humanities. Founded in 1930, the Institute is devoted to advancing the frontiers of knowledge without concern for immediate application. From founding IAS Professor Albert Einstein to the foremost thinkers of today, the IAS enables bold, curiosity-driven innovation to enrich society in unexpected ways.

Each year, the Institute welcomes more than 200 of the world’s most promising post-doctoral researchers and scholars who are selected and mentored by a permanent Faculty, each of whom are preeminent leaders in their fields. Among present and past Faculty and Members there have been 35 Nobel Laureates, 42 of the 60 Fields Medalists, and 19 of the 22 Abel Prize Laureates, as well as many MacArthur Fellows and Wolf Prize winners.

Loading...
"Not by might, nor by power, but by my spirit, saith the Lord of hosts." Zechariah 4:6
BEFORE IT'S NEWS ON TELEGRAM
GET THE TELEGRAM APP - https://telegram.org/ JOIN OUR CHANNEL - https://t.me/BeforeitsNews
Read it..
BEFORE IT'S NEWS
SIGN UP FOR OUR NEWSLETTER
Today's Top Stories
Must See *Very* Special Broadcast! Intel Insider: It's Not Over, Not Even Close! Trump Still POTUS & The Re-Birth of Our Republic (The 2-President Paradigm)
Declassified: Criminal Indictment For 911 Attack... May They All Burn In Hell.
Situation Update, Jan 22, 2021 - It's Already Too Late for the Controllers! - Mike Adams Must Video
Our Plans Are Not God's Plans! The End Won't Be For Everyone! Pray! - Must Video
Flyover Conservatives Bombshell Interview With Juan O'Savin (Video)
Restored Republic via a GCR: Update as of Fri. 22 Jan. 2021
Why Is The Pentagon Shutting Out Biden & Refusing To Cooperate? Is He The Commander In Chief Or Not? - Dave Hodges Must Video
WT?? The House of Representatives Were Just Told To Go Home!? Biden To Handle It All On His Own!
Clearly, Biden Is Not Being Filmed In The Real Oval Office --
President Trump Offers Troops Stays at Trump Hotel After Democrats Banish National Guard to Parking Garage
Loading...
Featured
America: What Now?
On Day 2, A Confused And Feckless ‘President’ Biden Admits Defeat In COVID Battle Saying ‘Nothing We Can Do’ To Stop Spread Of Coronavirus
Generals Tell Trump “We Got Your Back!”
Prophecy Alert: "Wonders In The Heavens" Rapture Is Near
The Patriot Party!!!
Trump update 01/22/2021..Senate awaits impeachment charge
X22Report: Memo Is Just The Beginning, How Do You Set The Stage, Public Opinion! - Must Video
Is Gold Money?
Hannity: Laptop repair shop owner at center of Hunter Biden scandal reveals everything
Biden Undermines Rule of Law
Top Global
Executive Order 13959: Threat From Communist Chinese Military Company Investments Triggers Financial War With China
Persian Gulf update 01/22/2021..Iran And Israel Are Gearing Up For A War
The Patriot Party!!!
Syria/Iraq update 01/22/2021.. Syrian air defense units intercept, destroy Israeli missiles over Hama
Israel Actively Vaccinates its Population but Refuses to Immunize Palestinians
Biden’s Presidency to Leave Turkey More Isolated Than Ever
In Cold Blood - The Savage Massacre of East Timor (Video)
Fauci: Mandatory Vaccines, Vaccine Passports? ‘Anything Is Possible’
Declassified: Criminal Indictment For 911 Attack... May They All Burn In Hell.
It Only Took 24 Hours: US Sends MAJOR Convoys Into Syria; Russian Moving Convoys to Intercept! (video)
Loading...
Top Alternative
Syria/Iraq update 01/22/2021.. Syrian air defense units intercept, destroy Israeli missiles over Hama
How The State Will Strip You Of Your Rights When SHTF:There comes a point at which the only thing in your mind is to know if you will return home alive. Everything else is secondary. At that point, the state has already massacred you internally
How to Win a Gun Fight: 14 Military Gun Fight Tactics
Persian Gulf update 01/22/2021..Iran And Israel Are Gearing Up For A War
Not Bot, Not Beast: Scientists Create First Ever Living, Programmable Organism
Don't Forget Your Mask & Your J Stamp: Amerika Held Hostage Day 3 - Dave Hodges
The First 19 Foods You Should Stockpile For Disaster- A good stockpile of food will go a long way toward helping you survive the aftermath of any disaster or life crisis, especially when grocery stores are emptied
Max Lucado | The Mark of the Antichrist Revealed
Is Martial Law Coming to the United States?
Nick Pope, RH Negative Blood, ET Abduction & UFO's, Next Level Disclosure via Leak Project