This illustration of a comet from the Oort Cloud as it passes through the inner solar system with dust and gas evaporating into its tail. SOFIA’s observations of Comet Catalina reveal that it’s carbon-rich, suggesting that comets delivered carbon to the terrestrial planets like Earth and Mars as they formed in the early solar system. 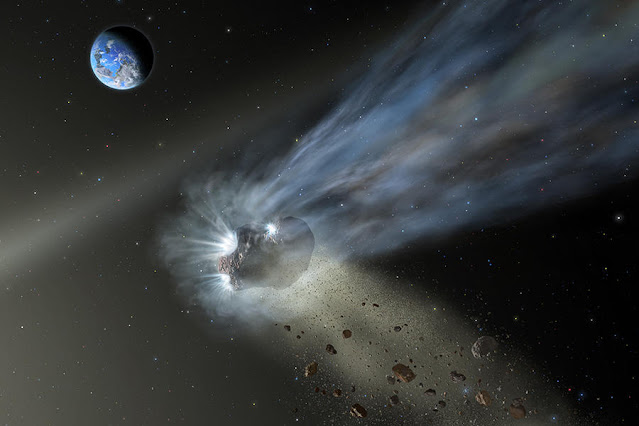 In early 2016, an icy visitor from the edge of our solar system hurtled past Earth. It briefly became visible to stargazers as Comet Catalina before it slingshotted past the Sun to disappear forevermore out of the solar system.

Among the many observatories that captured a view of this comet, which appeared near the Big Dipper, was the Stratospheric Observatory for Infrared Astronomy (SOFIA), NASA’s telescope on an airplane. Using one of its unique infrared instruments, SOFIA was able to pick out a familiar fingerprint within the dusty glow of the comet’s tail—carbon.

Now this one-time visitor to our inner solar system is helping explain more about our own origins as it becomes apparent that comets like Catalina could have been an essential source of carbon on planets like Earth and Mars during the early formation of the solar system.

New results from SOFIA, a joint project of NASA and the German Aerospace Center, were published in the Planetary Science Journal.

“Carbon is key to learning about the origins of life,” said the paper’s lead author, Charles “Chick” Woodward, an astrophysicist and professor in the University of Minnesota Twin Cities Minnesota Institute of Astrophysics. “We’re still not sure if Earth could have trapped enough carbon on its own during its formation, so carbon-rich comets could have been an important source delivering this essential element that led to life as we know it.”

Originating from the Oort Cloud at the farthest reaches of our solar system, Comet Catalina and others of its type have such long orbits that they arrive on our celestial doorstep relatively unaltered. This makes them effectively frozen in time, offering researchers rare opportunities to learn about the early solar system from which they come.

SOFIA’s infrared observations were able to capture the composition of the dust and gas as it evaporated off the comet, forming its tail. The observations showed that Comet Catalina is carbon-rich, suggesting that it formed in the outer regions of the primordial solar system, which held a reservoir of carbon that could have been important for seeding life.

While carbon is a key ingredient of life, early Earth and other terrestrial planets of the inner solar system were so hot during their formation that elements like carbon were lost or depleted. While the cooler gas giants like Jupiter and Neptune could support carbon in the outer solar system, Jupiter’s jumbo size may have gravitationally blocked carbon from mixing back into the inner solar system.

So how did the inner rocky planets evolve into the carbon-rich worlds that they are today?

Researchers think that a slight change in Jupiter’s orbit allowed small, early precursors of comets to mix carbon from the outer regions into the inner regions, where it was incorporated into planets like Earth and Mars.

Comet Catalina’s carbon-rich composition helps explain how planets that formed in the hot, carbon-poor regions of the early solar system evolved into planets with the life-supporting element.

“All terrestrial worlds are subject to impacts by comets and other small bodies, which carry carbon and other elements,” Woodward said. “We are getting closer to understanding exactly how these impacts on early planets may have catalyzed life.”

Observations of additional new comets are needed to learn if there are many other carbon-rich comets in the Oort Cloud, which would further support that comets delivered carbon and other life-supporting elements to the terrestrial planets. As the world’s largest airborne observatory, SOFIA’s mobility allows it to quickly observe newly discovered comets as they make a pass through the solar system.

SOFIA is a joint project of NASA and the German Aerospace Center. NASA’s Ames Research Center in California’s Silicon Valley manages the SOFIA program, science, and mission operations in cooperation with the Universities Space Research Association, headquartered in Columbia, Maryland, and the German SOFIA Institute at the University of Stuttgart. The aircraft is maintained and operated by NASA’s Armstrong Flight Research Center Building 703, in Palmdale, California.

Contacts and sources:
University of Minnesota