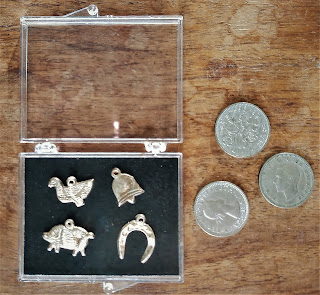 If you’re making a plum pudding for Yule, this weekend is the traditional time to get cooking.
As I mentioned on the Moon Books Blog yesterday, Stir-Up Sunday is five weeks before Christmas to allow the rich pud to mature. If you’re a pagan who feasts at the Winter Solstice rather than on December 25, you could make one earlier, but a few days either way won’t matter.
Today I’m blogging about the silver charms that have been put in plum puddings since at least Victorian times. Most common was a silver sixpence, but other popular items to include were a thimble, a silver ring, a button, and a wishbone. It was a sort of divination game, with the person who found one in their serving taking it as an omen of what to expect the following year: wealth, thrift, romance, remaining single or good luck.
Other things could be included too. The photograph shows silver pudding charms that were used in my family when I was a child. I’m guessing the bell meant a wedding and the horseshoe meant good luck, but I have no idea what the duck or pig indicated. There were originally six in the set, but two got lost over the years – I hope no one swallowed them! Doing a search, I found a picture of a similar set from the 1930s to 1950s containing nine things. You can see that here.
Next to my box of charms are three sixpences. They’ve long been considered lucky coins. The Royal Mail website: states:

“The sixpence coin was first struck in 1551… [and] quickly established itself as a popular fixture of Britain’s coinage, acquiring the nickname ‘tanner’, and in more superstitious times became a symbol of good fortune. Tucked in the bride’s shoe come wedding day, served up in a slice of Christmas pudding or given as a christening gift – the notion of a lucky sixpence has become embedded in British tradition.” 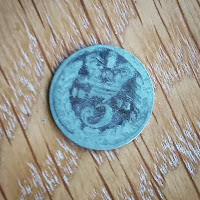 My sixpences date from 1949, 1951 and 1965. None are silver so couldn’t safely be boiled in the pudding, but could be stuck in afterwards, before serving. The Royal Mint debased silver coinage in 1920 from 92.5% silver to 50% silver, then stopped using silver for regular coins in 1946. If you don’t mind paying considerably more than sixpence, you can buy special edition silver sixpences from the Royal Mail shop. They’re a bit pricey for me, but I do also own a Victorian 3d coin,.which should be okay.