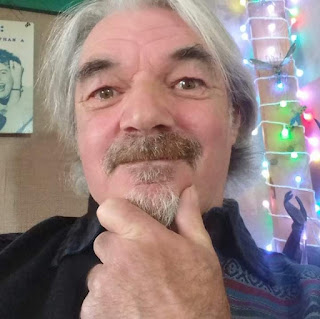 Scott Irvine is the author of Pagan Portals – Ishtar and Ereshkigal as well as having written about a variety of Goddesses including Lakshmi in Naming the Goddess, and the Stone Age Goddess in Seven Ages of the Goddess. For this post Scott talks to me about goddess worship and his writing:

Q: What prompted your interest in the goddesses you have written about?

A: I chose to write about the Hindu goddess Lakshmi simply because all the well known goddesses were already taken. However, Lakshmi is a goddess I have used to help me heal a broken heart. A good friend who followed the Hindu path introduced me to healing mantras suggesting I use the simple chant of ‘Om Shrim Maha, Lakshmi Yei Swaha’ which seemed to help. Lakshmi is known as the goddess of good fortune and in a short time my friend had become my girlfriend (now my fiancé), I had found employment and my writing career began to take off. Her energy, it seemed really worked.

Soon after I became an active member of the Association of Portland Archaeology and was giving guided tours around the Culverwell Mesolithic Site near Portland Bill. What I found most fascinating about the site was what was called the ‘goddess pit’, a small stone lined hole filled with cockle shells, a scallop shell with a small hole drilled in it and a large smooth round  pebble. It peaked my interest in the ancient Stone Age goddess and took to finding out who she was which leads us to Ishtar and Ereshkigal who I was researching when Moon Books offered me a book contract. 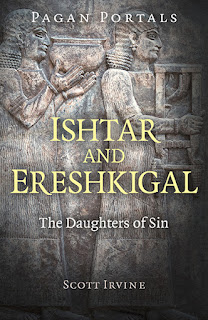 From the earliest form of writing on Sumerian clay tablets we are introduced to the Anunnaki,  ‘those from Heaven who came to Earth’. They were Earth’s first royal family who had advanced technology and guided humanity towards civilization. Ishtar and Ereshkigal are the dual forces of light and dark, of life and death that sustains nature. They are the original fertility goddesses and great great granddaughters of the Stone Age Mother Goddess Tiamat.

Q: What aspects of research about goddesses have you felt was most rewarding and inspiring? For example, was it archaeology, exploring ancient sites, history books, personal practice, traditional teachings or something else?

A: A good question. A simple answer is all of the above. I love archaeology, but it does not really define the role and purpose of the goddess in the minds of our ancient ancestors, only that she was revered and her image painted on cave walls in the form of symbols and sculptured from stone and bone. Archaeology does not reveal the thoughts and feelings of our ancestors.

As soon as I had my own wheels, a Suzuki TS 125 trail bike, I began visiting the many Bronze and Iron Age hill forts strewn across Dorset getting a ‘feel’ for Celtic life and a sense of their priests, the Druids. I began reading up on the way of the Celts but by not writing down their knowledge and wisdom. What we know about them today is purely from Roman propaganda and Victorian romantic ideas. What gods and goddesses they revered is lost in the mists of time.

Our understanding of ancient deities have been fashioned by Greek and Roman idealism garnered from their reworking of earlier Asian civilizations to suit the European market. History has always been recorded by the victors and what didn’t fit into the new ideals was conveniently hidden or destroyed.

Paganism, for me is largely about personal practice, my individual belief of how the universe operates and what fits into my own construct of being human. I find meditation important, clearing the mind from thought and emotion opens the way to connect with the goddess who I see as speaking for the universe (God). Traditional teachings play a large part on being a druid, or any path that is followed. It gives us our basic understanding on what a pagan is. It connects us and we can question, discuss ideas and learn from each other.

Connecting to the goddess is also about being mindful in nature and being with the earth spirits, it’s about listening to the birds singing and gazing into the night sky at the moon, the planets and the stars, something our ancestors would have done. 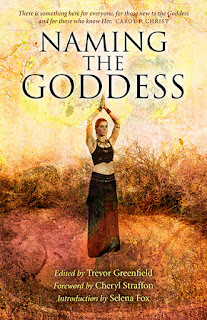 Q: I understand that you were inspired to follow goddess spirituality after exploring temples on the small Islands of Malta and Gozo in the Mediterranean Sea. Can you tell me more about how these temples sparked your interest in following that path?

A: I began to have an interest in ‘higher powers’ when my girlfriend Carolyn died in a motorbike accident when I was 23. I had struggled to understand why ‘God’ took her at the young age of 19.

After spiralling into the dark depths of despair for years I was asked what would Carolyn think if she could see me now. It bought me to my senses and I quickly straightened my life back into some kind of order. I ‘felt’ she was with me, looking down and protecting me. I came to see her as my guardian angel and someone I could relate and talk to. I found that everyone has a guardian angel looking out for them and furthermore they were in the employment of the Goddess which led to the question, who is the Goddess? I found she was only a footnote in history today but once played a major role in all early religions and replaced somewhere in the mists of time by a world of gods. I wanted to know when and why this happened.

For my 50th birthday I visited Malta and Gozo after discovering the oldest man-made structures still standing were constructed there around 5,000 years ago. By physically exploring these goddess temples and bathing in their sacred aura, opened my consciousness to the strong feminine spiritual forces they held, something I had never felt before.

Q: Do you feel you have a specific personal goddess or group of goddesses, or do you see them all as aspects of the divine feminine?

A: Another good question. Now, I see them as all the same aspect of the divine feminine, the Great Mother Goddess the Babylonians called Tiamat, the Mother of Life, the feminine force of the universe. When she was whole, she governed the Earth. She was life, death and rebirth, she was the upper, middle and lower world’s of the ancients, she was both heaven and Earth.

When Marduk defeated her, he cut her in to separating heaven from Earth and took control of the two realms creating a screen or veil between them becoming God’s voice on Earth disconnecting humanity from the source. Since then, the goddess energy has been further diluted so she is no longer a threat to the patriarchal dominance we experience today.

I tend to use specific goddesses depending on the occasion, Brigit for the Celtic wheel of the year, Lakshmi for good fortune and of course the opposing forces of Ishtar and Ereshkigal  (Yin and Yang) for balance and harmony. 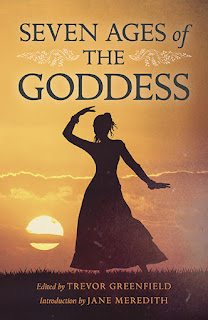 Q: What would be your advice for someone who is interested in learning more about goddess worship and in starting out on that path themselves?

A: It is important to recognise the feminine aspect within yourself which is natural for women but for most men in this patriarchal era it is not always that simple. Understand that we are all a mixture of both male (god) and female  (goddess) power.

First find a path that you are comfortable with,  there are many pagan paths to follow, and research their goddesses to find one(s) that you can relate to. Be prepared to explore several goddesses, in meditation, within a circle, in books and social media groups. Make an altar to her.

Look for a goddess that nurtures your soul, protects you from fear and guides you away from negativity. Connecting to a goddess is a two way thing, if you are right for her then she will find you.

Q: Are you working on any more writing at the moment and if so, what is it?

A: I am on the final chapters of the follow-up book to Ishtar and Ereshkigal called Shamash – The Son of Sin (Shamash being the Sun God and brother to Ishtar and Ereshkigal). I have recently finished writing The Magic of Serpents which I am very excited about, commissioned by Moon Books and at the copy editing stage. I have also began writing my second novel, The Dance of the Bees, set in 1675 AD on the Royal Manor of Portland. It is about secret royal births, buried treasure and a prophecy.

Q: What goddess site is your favourite in the world?

Of all the goddess temples I have visited, my favourite has to be the underground Hypogeum on Malta. The energy was something I have never experienced before with a mixture of awe and mystery with an undertone of fear and nausea. It truly was magical with its many tunnels, oracle holes, pits of skeletons and spiral murals on the walls. I was part of a guided tour but would love to explore it at my own pace someday, sit and meditate for a time and really soak up the power of the place.

Q: Is there anything else you would like to say?

A: I would like to add that I have found honouring the goddess, spending time with her has been very rewarding,  both spiritually and mentally. Her energy has kept me sane through the pandemic and she has given me hope for the future,  not only my future but the future of all life on the planet.

The goddess will look after you if you show her the respect she deserves. With her by your side, opportunities are never far away. Hail to the Goddess!